A common way for children's apps to teach letters is to have someone draw the letter, the app tracking the user's drawing. For this article, we'll implement this functionality by subclassing UIView, adding features incrementally, adding tests, managing Cocoapod dependencies, and using fastlane. You can follow along using the source code on GitHub. Along the way, I've added links to git tags, pointers to the code at specific points in time.

There are several UIView callbacks which deal with users touching the view.

When we detect that someone has moved their touch, we can grab the list of touches, which includes the current and previous position of the touch. We'll store those in a struct Line.

Then, we'll draw these lines in the the UIView's draw call. The drawing functionality is similar to other drawing APIs like HTML canvas.

We want to implement a feature where a user has to follow a particular path. If the user goes beyond some threshold of this path, then we want to detect that in order to give the user some sort of indication.

There are at least two ways we can implement this:

We'll implement #1 first since it is simpler.

To implement this, we'll first need to accept some expected path. Although we may want smooth paths at some point using bezier paths, we'll keep things simple and only support straight lines between segments. We'll display the path under our drawing to guide our touch. Since this expected path won't change, we'll draw this on an image. We'll display the image on an image view behind our drawing.

Next, when we draw, we will compare the points we draw, and calculate the distance from each of the points in the expected path. This is fairly inefficient but there are ways of making it quicker. One way is to partition the space into a set of areas and note which points in the expected path fall into these areas. (Related to BSP.) For now, we will just use the trivial method of doing this. If the line that we draw is beyond some threshold distance from the closest point on the expected path, then we will give some indication (by drawing the line red).

We create a property that will draw the expected path on the image associated with a UIImageView when it is set.

We change the touchesMoved call to note the color that should be used for the line. Black if the line is valid and red if invalid. We'll add a property in the Line struct to hold the color as well.

colorForPoints just checks if both of the line's points are within some threshold of any of the points in the expected path, returning black if so, and otherwise red. 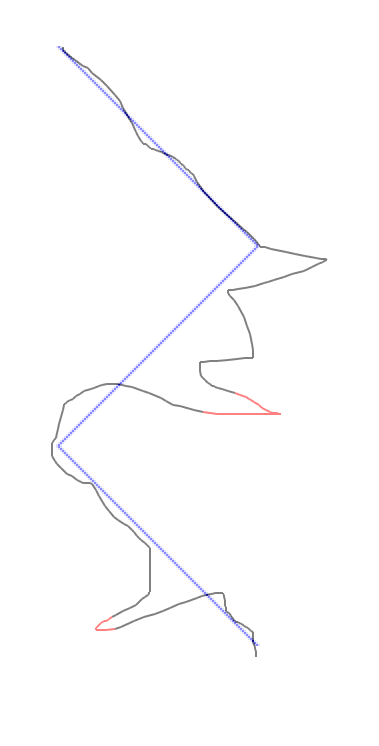 Although we've made good progress, this is somewhat unimpressive. There are two problems.

If you are interested in reading more, this post is continued at https://jamie.ly/blog/programming/2019/04/01/tracer-a-swift-drawing-view.html, where we'll add new features, import cocoapods, add unit tests and property-based tests, add CI, and distribute our code via Cocoapods.

Jamie Ly
I am a polyglot, full-stack developer with experience in front-end web development, back-end development including RESTful APIs, native iOS development, and devops. I am interested in software maintai
An Honest Opinion About My Blog.
#disscus #programming #career #motivation
Music Monday — What are you listening to? (Rock Edition 🤘)
#watercooler #music #discuss
What Makes You Stay In A Community?
#discuss #community #watercooler

Once suspended, jamiely will not be able to comment or publish posts until their suspension is removed.

Once unsuspended, jamiely will be able to comment and publish posts again.

Once unpublished, all posts by jamiely will become hidden and only accessible to themselves.

If jamiely is not suspended, they can still re-publish their posts from their dashboard.

Once unpublished, this post will become invisible to the public and only accessible to Jamie Ly.

Thanks for keeping DEV Community 👩‍💻👨‍💻 safe. Here is what you can do to flag jamiely:

Unflagging jamiely will restore default visibility to their posts.