In my previous post, I went over how to set up ML-Agents and train an agent.

In this article, I'll walk through how to build a 3D physics-based volleyball environment in Unity. We'll use this environment later to train agents that can successfully play volleyball using deep reinforcement learning.

Setting up the court

If you click Play ▶️ above the Scene viewer you'll notice some weird things happening because we haven't added any physics or logic to define how the game objects should interact yet. We'll do that in the next section.

⚠ Before we start, open the VolleyballArea prefab (Project panel > Assets > Prefabs). We'll make our edits to the base prefab, so that they are reflected in all instances of this prefab. This will come in handy later when we duplicate our environment multiple times for parallel training. 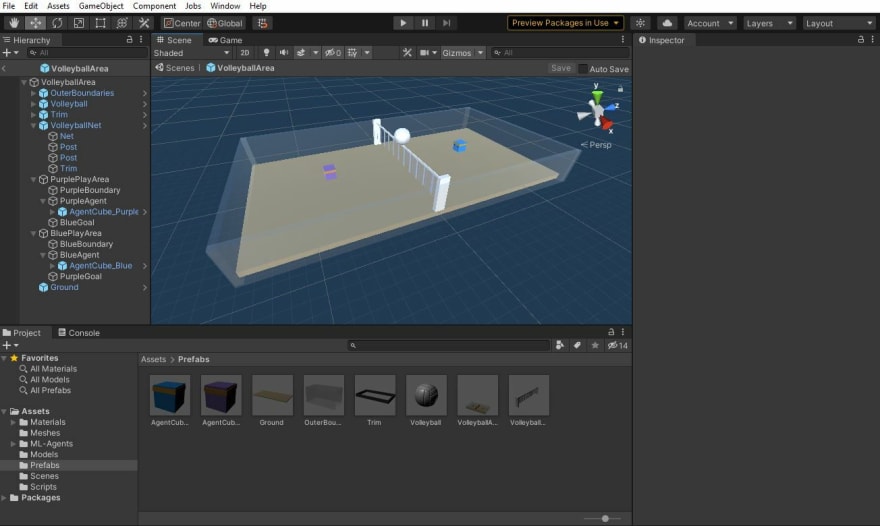 Add 'bounciness' to our ball: 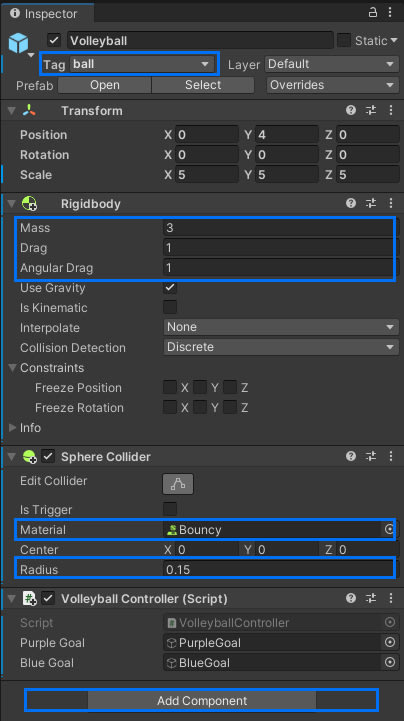 Both blue and purple agent cubes have already been set up for you in a similar way to the Volleyball.

Goals are represented by a thin layer on top of the ground.

When a game object is set as a trigger, it no longer registers any physics-based collisions. Even though the goals are placed above the ground layer, technically the agents are moving on the Ground layer collider we created earlier.

Setting triggers allows us to use the OnTriggerEnter method later which will detect when a ball has hit the collider.

There are three invisible boundaries:

Colliders, tags, and triggers for these boundaries have already been set up for you.

In this section, we'll add scripts that define the environment behavior (e.g. what happens when the ball hits the floor or when the episode starts).

Our first script will simply hold some constants that we'll reuse throughout the project.

Note: there is also a ProjectSettingsOverride.cs script provided. This contains additional default settings related to time-stepping and resolving physics.

Go back to the Unity editor and select the VolleyballSettings game object. You should see that these variables are available in the Inspector panel.

This script is attached to the Volleyball game object and lets us detect when the ball has hit our boundary or goal trigger.

This will allow us to access their child objects later.

This method is called when the environment is first rendered. It will:

Copy these statements into the Start() method:

This method is called when the ball hits a collider.

Some scenarios to detect are:

This method will detect each scenario and pass this information to envController (which we'll add in the next section). Copy the following block into this method:

This script holds all the main logic for the environment: the max steps it should run for, how the ball and agents should spawn, when the episode should end, how rewards should be assigned, etc.

In the sample skeleton script, some variables and helper methods are already provided:

This is called by the Unity engine each time there is a frame update (which is set to every FixedDeltaTime=0.02 seconds in ProjectSettingsOverride.cs).

This will control the max number of updates (i.e. 'steps') the environment takes before we interrupt the episode (e.g. if the ball gets stuck somewhere).

Add the following to void FixedUpdate():

This controls the starting spawn behavior.

Our goal is to learn a model that allows our agent to return the ball from its side of the court no matter where the ball is sent. To help with training, we'll randomise the starting conditions of the agents and ball within some reasonable boundaries:

This method will resolve the scenarios we defined earlier in VolleyballController.cs.

We can use this method to assign rewards in different ways to encourage different types of behavior. In general, it's good practise to keep rewards within [-1,1].

To keep it simple, our goal for now is to train agents that can bounce the ball back and forth and keep the ball in play. We'll assign a reward of +1 each time an agent hits the ball over the net using the AddReward(1f) method in the corresponding scenario:

We won't assign any rewards for now if a goal is scored or the ball is hit out of bounds. If either of these scenarios happen, we'll just end the episode. Add the following code block to the sections indicated by the // end episode comment.

Now when you click Play ▶️ you should see the environment working correctly: the ball is affected by gravity, the agents can stand on the ground, and the episode resets when the ball hits the floor.

You should now have a volleyball environment ready for our agents to train in. It will assign our agents rewards to encourage a certain type of behavior (volleying the ball back and forth).

In the next section, we'll design our agents and give it actions to choose from and a way to observe its environment.

If you have any feedback or questions, please let me know!