In part 2, we built a 3D physics-based volleyball environment in Unity. We also added rewards to encourage agents to 'volley'.

In this tutorial, we'll add agents to the environment. The goal is to let them observe and interact with the environment so that we can train them later using deep reinforcement learning.

We want our agent to learn which actions to take given a certain state of the environment — e.g. if the ball is on our side of the court, our agent should get it before it hits the floor.

The goal of reinforcement learning is to learn the best policy (a mapping of states to actions) that will maximise possible rewards. The theory behind how reinforcement learning algorithms achieve this is beyond the scope of this series, but the courses I shared in the series introduction will cover it in great depth.

While training, the agent will either take actions:

ML-Agents provides a convenient Decision Requester component which will handle the alternation between these for us during training.

To add a Decision Requester:

Both agents are already set up with the VolleyballAgent.cs script and Behavior Parameters component (which we'll come back to later).

In this part we'll walk through VolleyballAgent.cs. This script contains all the logic that defines the agents' actions and observations. It contains some helper methods already:

Adding an agent in Unity ML-Agents usually involves extending the base Agent class, and implementing the following methods:

At a high level, the Decision Requester will select an action for our agent to take and trigger OnActionReceived(). This in turn calls MoveAgent().

This method resolves the selected action.

Within the MoveAgent() method, start by declaring vector variables for our agents direction and rotation movements:

We'll also add a 'grounded' check to see whether its possible for the agent to jump:

The actions passed into this method (actionBuffers.DiscreteActions) will be an array of integers which we'll map to some behavior. It's not important which order we assign them, as long as they remain consistent:

In Unity, every object has a transform class that stores its position, rotation and scale. We'll use it to create a vector pointing to the correct direction in which we want our agent to move.

Based on the previous assignment order, this is how we'll map our actions to behaviors:

Add to the MoveAgent() method:

volleyballSettings.speedReductionFactor is a constant that slows backwards and strafe movement to be more 'realistic'.

Finally, add in the logic for controlling jump behavior:

To test that we've resolved the actions properly, lets implement the Heuristic() method. This will map actions to a keyboard input, so that we can playtest as a human controller.

Save your script and return to the Unity editor.

In the Behavior Parameters component of the PurpleAgent: 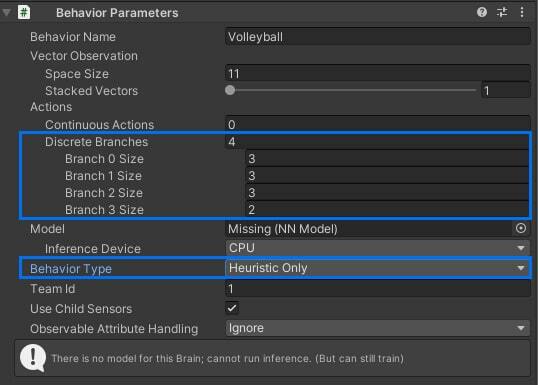 Press ▶️ in the editor and you'll be able to use the arrow keys (or WASD) and space bar to control your agent!

Note: It might be easier to playtest if you comment out the EndEpisode() calls in ResolveEvent() of VolleyballEnvController.cs to stop the episode resetting.

Observations are how our agent 'sees' its environment.

In ML-Agents, there are 3 types of observations we can use:

In this project, we'll implement vector observations to keep things simple. The goal is to include only the observations that are relevant for making an informed decision.

With some trial and error, here's what I decided to use for observations:

This is a total of 11 vector observations. Feel free to experiment with different observations. For example, you might've noticed that the agent knows nothing about its opponent. This ends up working fine for training a simple agent that can bounce the ball over the net, but won't be great at training a competitive agent that wants to win.

Also note that selecting observations depends on your goal. If you're trying to replicate a 'real world' scenario, these observations won't make sense. It would be very unlikely for a player to 'know' these direct values about the environment . 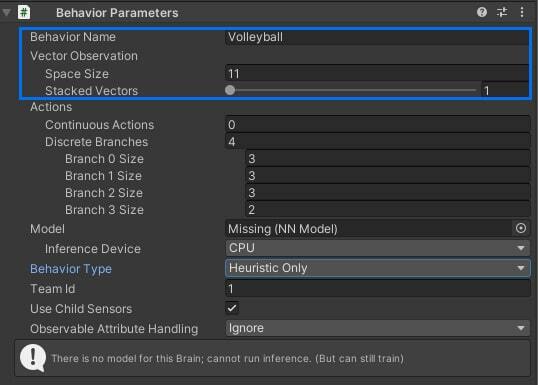 You're now all set up to train your reinforcement learning agents.

If you get stuck, check out the pre-configured BlueAgent , or see the full source code in the Ultimate Volleyball project repo.

In the next section, we'll train our agents using PPO — a state of the art RL algorithm provided out-of-the-box by Unity ML-Agents.

If you have any feedback or questions, please let me know!