Where Everything Began - First Act

"Knowledge is like money: to be of value it must circulate, and in circulating it can increase in quantity and, hopefully, in value." ~ Louis L'Amour

In February, I had a task to improve the performance of an NFT marketplace. I had surface knowledge of web performance at the time. I spent an insane amount of time researching and watching tech talks on videos. I decided to write this article to make the journey easier for you.

Aimlessly looking for answers with a gazillion tabs open, my PC freezes with no solution in sight. I decide to shut down my PC and then go out for a walk to clear my thoughts.

I return 30 minutes later to find a strange blue light emitting from my room. It was coming from my PC which was still on but frozen. I try long pressing the power button but I end up getting sucked into the screen.

I wake up in a weird-looking room then I immediately get approached by a giant robot with the letters HTML on its chest.

Renderland is the planet on which Rendering takes place. It's the closest planet to the screen and it's what users see and interact with. It's located in the Browser's Solar System which is also under the The Web Galaxy. 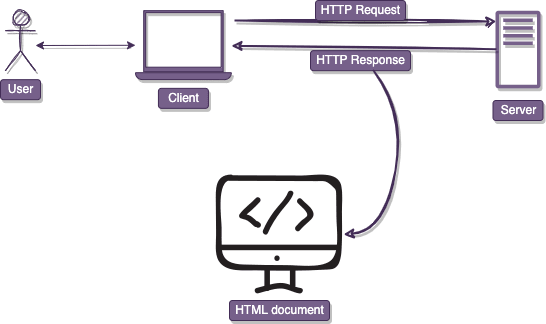 This diagram shows how a typical request travels through the internet where it finally reaches a server which sends back a response to the client.

The response manifests different entities such as Styles, Markup, Scripts, Fonts, and other files. They represent the different life forms on Renderland. They live together to make up the content that you see and interact with.

HTML, the planet's elder summoned us all for a meeting under the Sacred Tree.

🤖 Robot 1 I'm HTML, you've probably met my grandson, HTLM5. We're both from the Markup tribe and we make up the content of pages on the web.

🤖 Robot 2 I'm CSS from the Styles tribe, and we give web pages looks and style.

🤖 Robot 3 I'm JavaScript but you can call me JS, I'm from the Scripts tribe- no relation, and we practice making web pages interactive.

🤖 HTML A prophecy spoke of a FullSnack Engineer with a mechanical keyboard and an E mark who'd save Renderland. The Engineer spoke an ancient language called Code.

🤖 JS We believe you're the chosen one.

Long ago, the robots lived in a faraway land known as ServerLand where they served a group of entities called clients. The clients lived in ClientLand and they all had different shapes and sizes.

The request-response-cycle is a model that describes how clients and servers communicate over a network via a protocol such as HTTP or Web Sockets.

Rendering is the process of turning a web page's assets (HTML, CSS, JSS, and other static assets) into interactive content on the browser. Rendering steps include style, layout, paint, and, in some cases, compositing.

The Critical Rendering Path is the sequence of steps the browser goes through to convert the HTML, CSS, and JavaScript into actually visible pixels on the screen.

HTML5 and CSS then summoned me to the Sacred Tree. They began explaining the history of the tree and how it came to life.

Both are represented internally as a tree-like structure that allows programs to interact with the CSS and HTML content of a web page.

The Render Tree is the product of combining DOM and CSSOM trees. It defines the structure of a web page. The tree contains only the visible elements of a web page.

The browser calculates the layout of each visible element and then paints it on the screen with the help of the Render Tree. 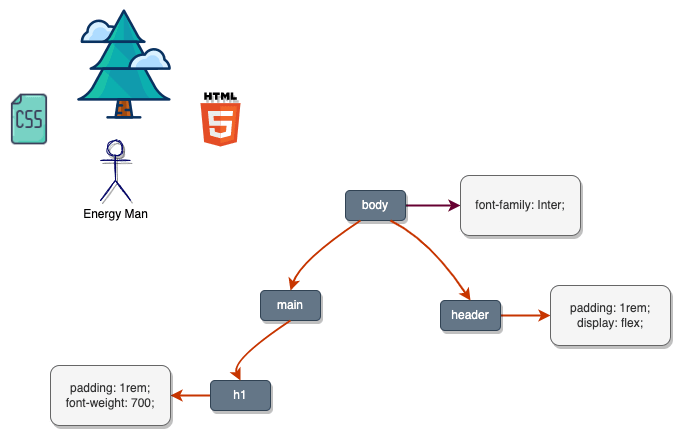 Browser computes the geometry of the layout and its elements based on the render tree.

Browser paints pixel by pixel to create the visual representation we see on the screen. Using the Render Tree, the browser engine calculates the position of each visible element of a web page.

The robots then began explaining how rendering is practiced in Renderland.

The most ancient form of Rendering. This pattern generates the full HTML for the page content to be rendered in response to a user request.

This form of rendering became popular during the Ajax era in 2005. Ajax which stands for Asynchronous JavaScript and XML allowed developers to build client-side applications.

In this pattern, the server renders a skeleton of an HTML container whilst the client handles the logic required to render a web page. The client takes care of fetching, templating, routing, etc.

Guardians of Renderland (The Pillars 👺)

Also known as the Web's Vitals, they are Renderland's guardians of performance. They measure and report any issues that may affect the performance of a web page. 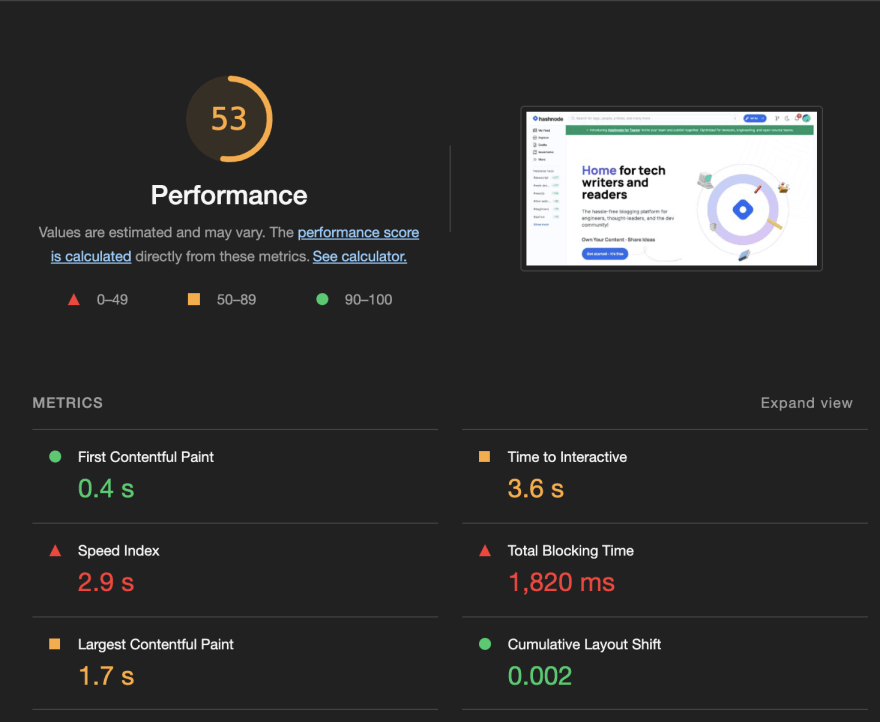 This screenshot is from Lighthouse's report on Hashnode's home page.

This Pillar is responsible for reporting the arrival of the very first byte of incoming data. It helps quantity a server's response time by measuring the latency of a round trip to and from said server. It precedes every other Pillar.

Time to First Byte (TTFB) The time between the initial request and the arrival of the first byte.

This Pillar measures the time a browser takes to paint pixels on a screen. The shorter the time, the better the performance.

The first instance of content that appears on the browser. Think of it as the first drop of water when you open the tap.

Measures how long it takes the browser to render the first piece of DOM content after a user navigates to your page.

💡 The recommended FCP score is 1.8 seconds or less

The time when the main page content becomes visible. It consists of the initial HTML document + LCP Resource.

💡 The recommended LCP score is 2.5 seconds or less

Also known as (TTI), represents the state at which a web page is ready to respond to events and user interactions. This is made possible when all the Scripts tribe members have arrived/loaded.

TTI is reached only after FCP. Having a huge gap between these two metrics causes serious problems.

💡 The recommended TTI score is 3.8 seconds or less

The total amount of time between FCP and TTI. It means that the event handlers are registered for most visible page elements, and the page responds to user interactions within 50 milliseconds.

💡 The recommended TBT score is 200 milliseconds or less

We receive multiple reports from different locations. Web pages are unresponsive, some fail to load and others are painfully slow.

It was later revealed that Renderland is being invaded by an intelligent species of bugs. They came in different shapes and sizes and wreaked havoc on the planet.

The bugs have directed their first attack on the pillars. Let's see how each metric affects performance.

The bugs that affect this network usually manifest in the form of network or device issues.

The following factors may affect TTFB

This metric mainly reports performance issues related to static/viewable content. The bugs that affect this metric usually manifest in the form of unoptimized assets such as HTML, CSS, and images.

The bugs that affect this pillar mainly focus on scripts since it focuses on issues related to the interactivity/usability of a web page. Unoptimized JavaScript is the biggest offender in this category because it needs to be parsed and compiled before it's finally executed.

These are some of the most common web performance bottlenecks.

These include the scripts, styles, and HTML imports that block or delay the browser from rendering content to the screen.

This is the amount of JavaScript a user will have to download to load your website. A larger bundle size means users will have to wait longer before they could interact with your site.

As developers, we must make sure that the apps we build are performant and resilient. This section will equip you with new superpowers to assume this role.

To defeat the bugs, we need fully understand to how to measure the impact of their attacks on performance.

💡 How is performance measured?

Also known as Real user monitoring (RUM) refers to the process of recording user interactions on a production website.

This topic is beyond the scope of this article so we'll jump right into Lab Testing.

Refers to the process of testing an application in an environment such as development or staging before the site is released to the public.

Learning how to measure the performance of a website was the first step. Now we need to learn how to optimize the metrics we measured.

This metric indicates how fast or slow a server is. It measures the latency of a round trip to and from a server.

How to improve TTFB

Asset optimization can play a huge role in improving this performance metric. Let's see how we can accomplish this.

How to improve LCP

You might be familiar with JavaScript's single thread nature, if not then this article might be a great resource for you.

💡 What is a Main Thread?

How to improve TTI

We run most of our code on the main thread. Lifting off the burden or delegating some of this work to another Service can increase the performance of a web page.

Delaying the execution of event handlers can increase performance because it helps the browser avoid fast consecutive events. These events can block frames from completing, and can cause additional and unnecessary layout work.

Web workers can be used to delegate complex processes and run tasks in the background in a separate thread.

Means the browser will only download the JavaScript users need at the time. For example, let's consider a web app with three pages, namely home, chat and notifications. Code-splitting allows you to download only the JavaScript relevant to your home page and then download the remaining assets on-demand or when a user navigates to a page that actually needs.

Propagating or bubbling up an event in the hierarchy of the DOM tree can increase a web page's performance.

This pattern uses a pre-built DOM with components rendered as HTML. The app then loads the remaining data in the client side.

This pattern renders an app shell to static HTML during build time .

Choosing the right tool for the job is a critical skill for every Software Engineer. Software choices are usually determined by the project's requirements. 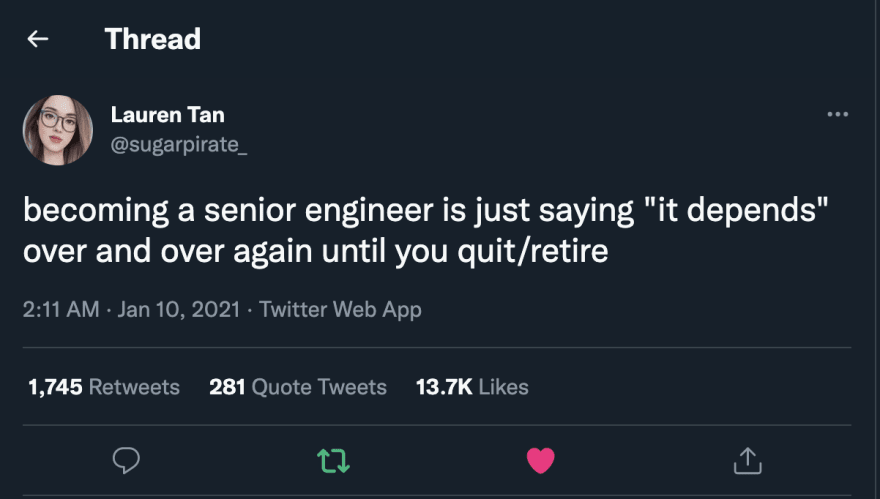 I'm currently working on a few more sagas. Let me know if you're interested in more sagas in the comments below 😁

NB: Part 2 of this article. will explore the practical aspects of web rendering performance. I decided to break it into two parts because I don't want to overwhelm the reader.

Fun Fact: This article's story line was inspired by

I'm a newbie In Dev.to From Iran 😁