The very first question I had in my mind was "how to trigger release pipeline after build pipeline?"

If I author CI/CD in same yaml, even by using multi-stage, I don't have to think about "triggering CD", but what if I author CI and CD in separate yml and create two pipeline?

Resources is great way to trigger pipeline by types such as pipelines, builds, repositories, containers, and packages. In this article, I focus on pipeline resource.

Without further due, let's create build pipelines for test.

2. Add build-pipeline.yml file and update yaml as below. As you can see, every steps is just dummy. This pipeline generate one artifact.

5. It generates one artifact.

6. Rename the pipeline so that it's easy to see this is build pipeline.

Next, create release pipeline which will be triggered after the build pipeline. 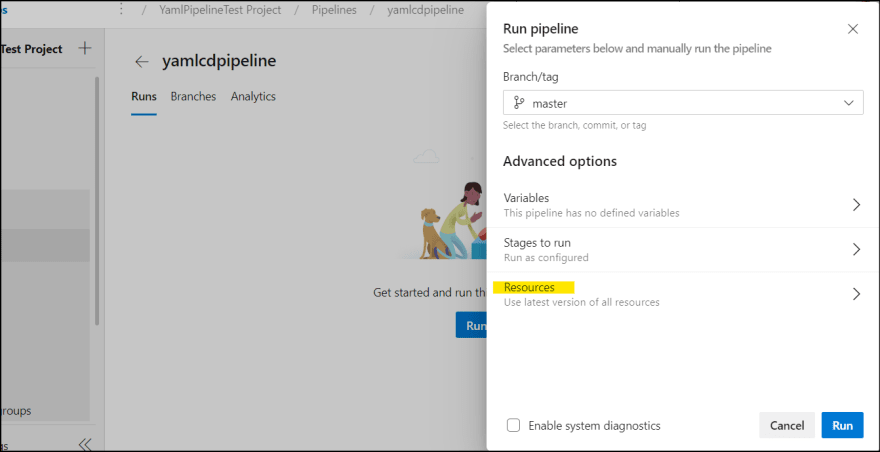 6. Then, run the pipeline and see the result.

7. Rename the pipeline if you want.

Now it's time to do CI/CD test. Simply update greatcode.text content and commit to master.

There are several things to note here.

I set trigger to none explicitly so that the release pipeline won't be triggered in any change to branches.

Then I reference this in many places.
I use download task to explicitly download drop artifact. This is useful when build pipeline publish multiple artifacts but release pipeline doesn't need them all.

The downloaded artifact can be accessed with pre-defined variable.

I also other pre-defined variable to identify zip file name.

I can simply speficy *.zip, but this is useful when I need Build.BuildId in release pipeline.

There are several things I need to know in advance to author pipelines, but once I know it, it's easy. Hope this information helps you.