This post explains how to convert StatsD metrics using the Prometheus StatsD-exporter, and later visualising them with Grafana.

I explain from the perspective of an application which is instrumented with StatsD but is monitored by a Prometheus server. As such, I will use the terminal as a pretend application emitting metrics ; Prometheus will monitor the application and collect any metrics ; and finally Grafana will be used to draw a graph by using Prometheus as a data source.

This section briefly covers why each technology is being used but to learn more, you can read about each using the links in the Recommended Reading section.

During a system's runtime, measurements taken of any of its properties are known as metrics. These metrics are typically in the form of data points associated with some information to give it context. Metrics are things like the number memory bytes used, number of website visitors, the time a task took to complete, etc.

StatsD metrics allow such information to be recorded and represented using a text format specification. Below are two StatsD metric lines each representing how long an API request has taken.

In the above example, two API calls to GET /api/orders are measured at 84 and 95 milliseconds each. The |ms is used with StatsD timer metrics. StatsD also supports other metric types like Counters, Gauges, Histograms and more.

To record information about the metric, in this case the name of the API and its endpoint, the <metric name> part is dot-delimited so those details can be captured.

Later you will see how the Statsd-exporter will help us capture the dot-delimited parts we are concerned with.

Prometheus can be used to monitor the performance of an instrumented system such as, a microservice, a host server, etc. The system will need to expose its metrics in order for Prometheus to collect them - this is also known scraping. The scraped metrics can then be visualised or queried using the Prometheus expression-browser. Prometheus also has an AlertManager which can send alerts about certain metrics being monitored - it has support for Slack, PagerDuty, email and more.

The following diagram shows Prometheus scraping an application's metrics which are exposed on the/metrics path. Grafana can then use these metrics for visualisations. 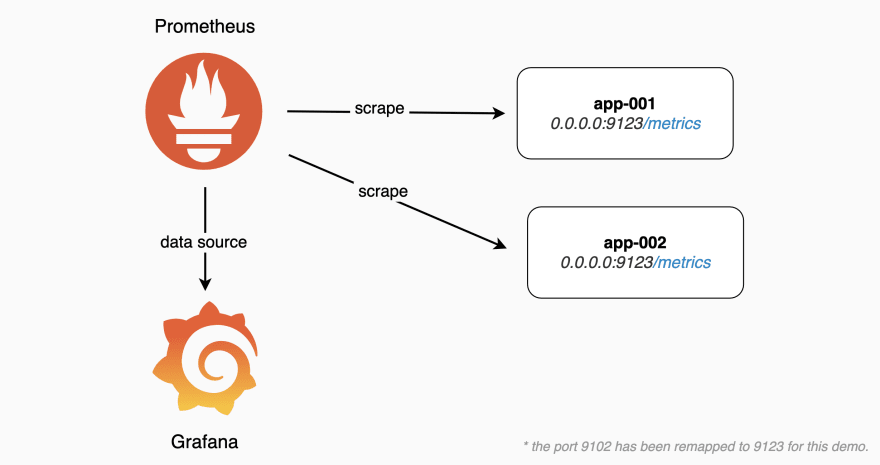 The statsd-exporter is used to convert Statsd metrics into Prometheus metrics. This is because the StatsD text-format represents metrics differently to Prometheus' exposition format which is represented like this:

The following diagram shows how a StatsD metric, is converted to Prometheus metrics by using an exporter's mapping rules. 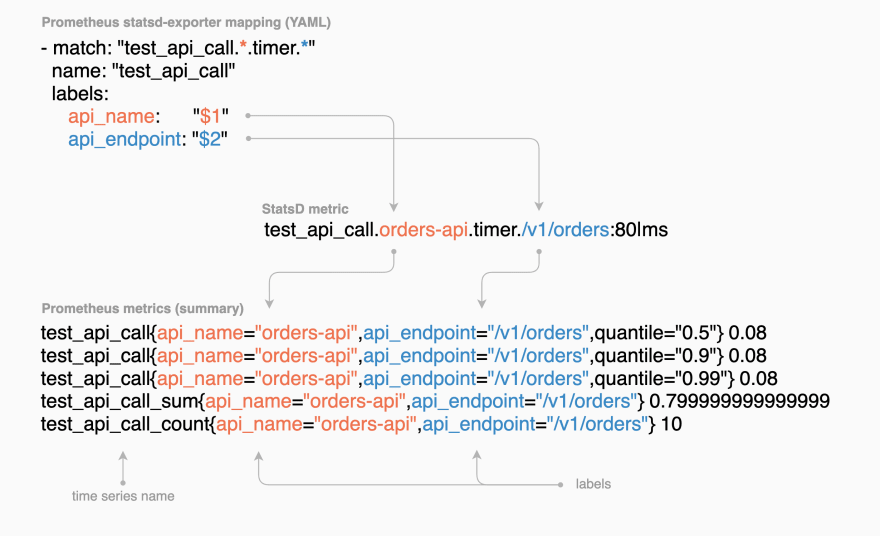 It is very common for a system to record its metrics in a format different to Prometheus, therefore there are many Exporters written which allow such metrics to be converted to Prometheus' time series notation

Where did count, sum and quantile come from?

The StatsD-exporter automatically converts timer metrics into a Prometheus summary. The summary contains extra information like the count, sum and each quantile for the current observation. By default the quantiles are 0.5, 0.9 and 0.99.

In the image above, 10 API requests took 80 milliseconds each to respond. As such a summary is generated with these details:

Now there is an understanding of what each technology does in relation to each other, we can get started implementing our test application.

In this section the configuration files for both Prometheus and the statsd-exporter are created.

Create the Directory and Files

Create a directory named .prometheus to contain the files prometheus.yml and test-mapping.yml as follows:

Run tree or find . to verify the files.

This gives us some basic configuration for the Prometheus server such as static service discovery, and how often to scrape each discovered service.

Add the following to the prometheus.yml file and save it.

Prometheus also supports dynamic service discovery which is useful if you deploy applications on AWS ECS or other scalable cloud solutions.

This is the file used by the Prometheus statsd-exporter so it knows how to convert StatsD metrics into Prometheus metrics.

Add the following to the test-mapping.yml file and save it.

Before visualising any metrics with Grafana, we can check whether our Statsd metrics are being converted correctly.

To start, run the the official Prometheus statsd-exporter Docker image, and then send it metrics over port 8125.

Make sure you are inside the .prometheus directory.

After running the image you should see output like this:

Now the Prometheus server can be started so it can scrape the metrics exposed on port 9123.

Recall that the prom-statsd-exporter container, is exposing metrics on container port 9102 which were remapped to host port 9123.

Make sure you are inside the .prometheus directory.

After running the image you should see output like this:

The above informs us that the prometheus.yml file was loaded, and Prometheus knows about the two targets to scrape.

Verify the Targets are Up and Running

Go to localhost:9090/targets. Each one endpoint for each target should be up. 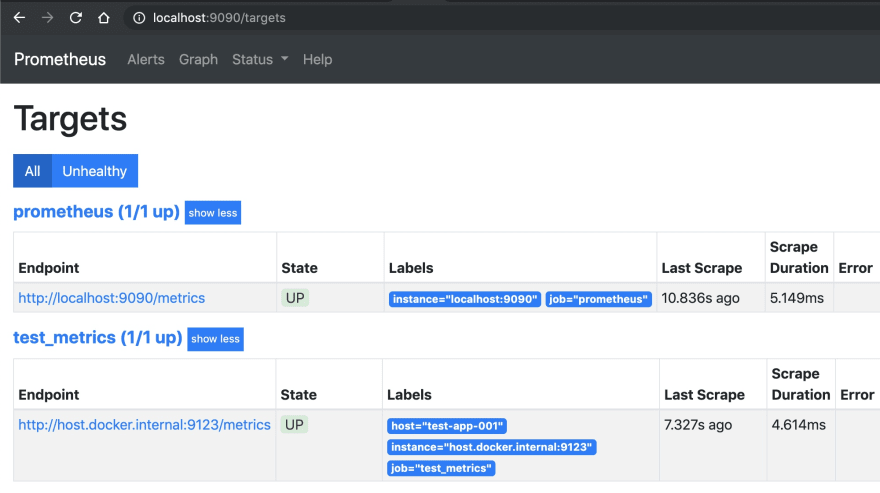 We can start sending metrics and prometheus will scrape them.

Now try sending a couple metric over localhost IP address and port 127.0.0.1:8125 using the lines below.

Search for test_api_call and you should see a Prometheus summary similar to the following.

This final section looks at starting up Grafana on port 3000, adding a Prometheus data source, and creating a Graph to visualise the API call metrics.

The default username and password for Grafana are both admin and admin respectively.

Optionally, you can also update the legend field to {{api_name}} - {{api_endpoint}} as seen below also - doing so will display the legend like this: orders-api - /v1/orders.

Now to save us having to send metrics manually - just to update the graph more frequently, we can write a simple command-line statement which will send a metric every second. This will be done in two shells, in order to simulate API calls to our fictional orders-api and invoice-api.

Below the shuf command is used to generate a random range of milliseconds between 50 and 150.

use ctrl+c to stop either loop

After a few seconds you should see the graph drawing. And some time later - in my case 5 minutes your graph should look similar to the image below. Make sure the Dashboard's refresh rate is at least 5 seconds. 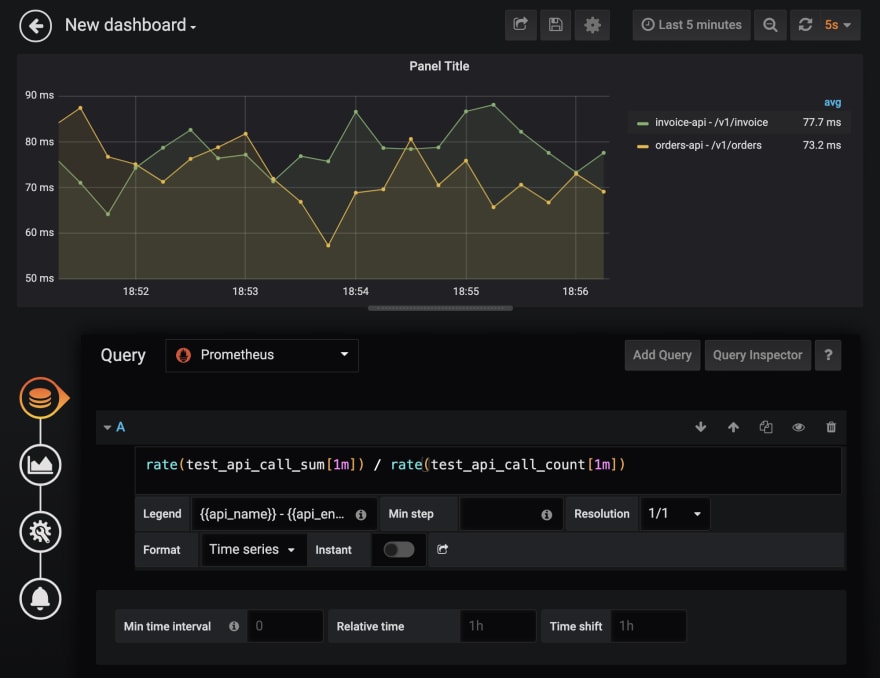 How do I emit metrics from a real application?

There are StatsD client libraries written for Go, Node, Python, Perl and more. See link below:
https://github.com/statsd/statsd/wiki#client-implementations
Some of the libraries also default the host localhost and port to 8125 so you can get up and running quickly.

Can I just emit metrics to Prometheus format instead of StatsD?

Yes, it is possible instrument an application to record metrics in Prometheus format. This approach eliminates the need to use a Prometheus exporter sidecar and the extra work of creating a mapping file.

To instrument your application with Prometheus, use one of the official or unofficial client libraries.

Getting Statsd metrics out of an application (terminal for this demo) and into Grafana, only required the following:

That was it! The majority of this post is mostly explaining some essentials which I think are very important to understand. Although the terminal is used as a pretend application 'to emit metrics', the principles are the same for a real application. So whether you write your application in Go, Node, Python, etc, you can just use a StatsD client library to emit metrics from it.

Monitor WordPress with Prometheus and Grafana

Once suspended, kirklewis will not be able to comment or publish posts until their suspension is removed.

Once unsuspended, kirklewis will be able to comment and publish posts again.

Once unpublished, all posts by kirklewis will become hidden and only accessible to themselves.

If kirklewis is not suspended, they can still re-publish their posts from their dashboard.

Once unpublished, this post will become invisible to the public and only accessible to Kirk Lewis.

Thanks for keeping DEV Community 👩‍💻👨‍💻 safe. Here is what you can do to flag kirklewis:

Unflagging kirklewis will restore default visibility to their posts.