Chances are you have already ran into sites where there is a bar, usually located in the header, that increase or decrease according to the page scroll. So, that's what this post is about.

Basically, what we want to do is to check where is the scroll compared to page content size, so if the user have scrolled until the middle of the content, the bar is supposed to fulfill 50%, and so on, always tracking and applying the math to do so.

After fitting the bar in the HTML body, just like the codepen example above, add some content to be able to see some effect when scrolls happen.

document.documentElement.scrollHeight gives us a number referring to the height of HTML document, the max number that we can get until the scroll stuck in the bottom, the whole content.

document.documentElement.clientHeight gives us a number referring to the height of HTML document that we can see, that's viewable.

Illustration of the difference between clientHeight and scrollHeight 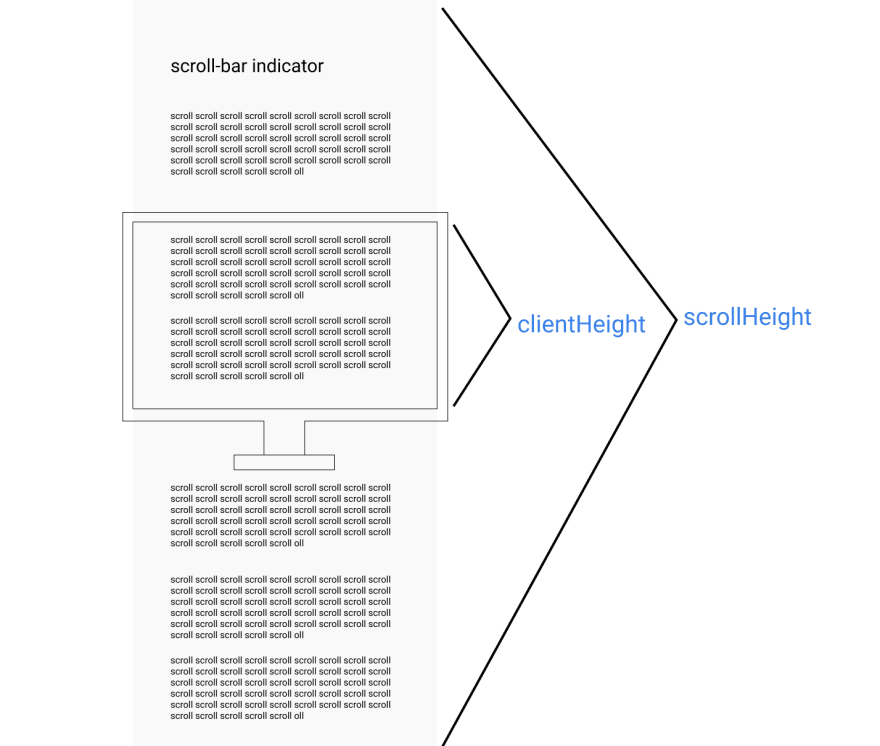 Now in .css file, we style the bar. The bar wrapper covers 100% of the screen, also fixed at the top, so even in the scrolls it appears. Moreover, the .scroll-bar, the visual bar in itself, receive initially width:0, as it will change with the user scrolls. As well, the same height as the wrapper, its father, and the color to make it all visual.

You can make lots of different styles. This is just a sample with the essence. For instance, you could make the bar as a pseudo-element of main, so avoiding HTML directly, just like so:

I wish you found it interesting or learn sth. Goodbye! 👋

Once suspended, leonardoschmittk will not be able to comment or publish posts until their suspension is removed.

Once unsuspended, leonardoschmittk will be able to comment and publish posts again.

Once unpublished, all posts by leonardoschmittk will become hidden and only accessible to themselves.

If leonardoschmittk is not suspended, they can still re-publish their posts from their dashboard.

Once unpublished, this post will become invisible to the public and only accessible to Leonardo Schmitt .

Thanks for keeping DEV Community safe. Here is what you can do to flag leonardoschmittk:

Unflagging leonardoschmittk will restore default visibility to their posts.