Sinatra is a lean and fun framework to build simple web apps and microservices in Ruby. Traditionally developers would deploy to a platform like Heroku or self-managed server. But what if your team is working in more than one language and need a uniform way of deploying things to the cloud? This is, of course, a great use case for Docker.

Let's say your Sinatra app has a simple structure:

To package it in Docker, create a Dockerfile:

Note the RUN bundle install --without development test line. I'm assuming that you're building a container for deployment purposes, and we don't need our development dependencies for that.

In case you want to run all development tasks and tests in Docker, you have two options:

Either way, you can build and run the container locally:

That's great, now we have our app running in a standard container.

How can we deploy it? The best platform to run Docker containers today is Kubernetes. For a detailed tutorial on deployment, see my other post: 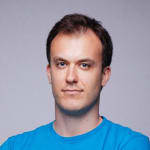 CI/CD for Microservices on DigitalOcean Kubernetes

How are docker images built? A look into the Linux overlay file-systems and the OCI specification