Semaphore gives you the power to easily create CI/CD pipelines that build, run and deploy Docker containers. DigitalOcean recently introduced a managed Kubernetes service which simplifies running cloud-native applications. Together, they’re a great match for productive software development. In this article we’ll show you how to connect these two services together in a fast continuous delivery pipeline.

We'll use a Ruby Sinatra microservice which exposes a few HTTP endpoints and includes a test suite. We'll package it with Docker and deploy to DigitalOcean Kubernetes. The CI/CD pipeline will fully automate the following tasks:

We'll go step by step, but if you'd like to jump straight into the final version of source code, check out semaphore-demo-ruby-kubernetes repository on GitHub:

This is an example application and CI/CD pipeline showing how to build, test and deploy a microservice to Kubernetes using Semaphore 2.0.

Distributed under the MIT License. See the file LICENSE.

Launch a Kubernetes cluster in 5 minutes on DigitalOcean

Launching a Kubernetes cluster on DigitalOcean is straightforward. From your dashboard, use the "Create" button on top to create it. The cluster will become available in 4-5 minutes.

The cluster page includes a number of tips and resources that you can use. If you haven't done that yet, now is the time to install kubectl, the Kubernetes command-line tool.

Connect to your Kubernetes cluster

Scroll to the bottom of your cluster page to download the configuration file that you will use to authenticate and connect to the cluster.

On your local machine, create a directory to contain the Kubernetes configuration file:

Move the downloaded file to ~/.kube and instruct kubectl to use it. You can run the following command in your terminal session, or add it to your shell profile like .bashrc or .zshrc:

Make sure to change dok8s.yaml to match the name of your file.

Verify that you can communicate with your DigitalOcean Kubernetes cluster by running kubectl get nodes. When the command is successful, it returns information similar to the following:

DigitalOcean hasn't yet responded to my inquiry about their relationship with Walter White.

Connect Semaphore to your Kubernetes cluster

At this point you have a Kubernetes cluster that you can control from your local machine. Let's configure a basic CI/CD project in which Semaphore can also successfully execute kubectl get nodes.

If you're new to Semaphore, start by creating a free account. The free account provides you with $20 of credit every month, which is enough for up to 1,300 minutes of service. If you connect a credit card, you'll get an additional $200 of free credit.

Create a project on Semaphore

Once you’re in Semaphore, follow the “Projects > New” link in the sidebar on the left hand side. You can follow the on-screen instructions to select a repository and commit the default YML file. In this tutorial I’ll show you the command line approach.

First, install sem, the Semaphore command-line tool. You’ll find the exact instructions by opening up the CLI widget in the top-right corner of any Semaphore screen. 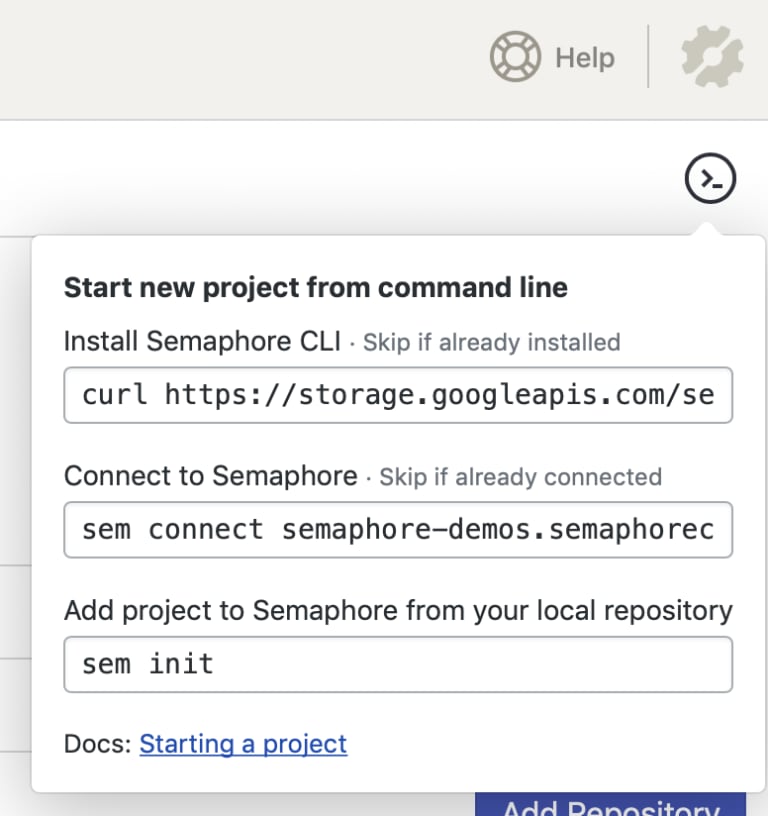 The first command downloads and installs the CLI:

The second command connects sem to your organization account:

The command creates a deploy key and webhook on GitHub, so that Semaphore can access your code as it changes, and creates a pipeline definition file .semaphore/semaphore.yml on your computer.

Let's edit semaphore.yml and instruct Semaphore how to talk to Kubernetes.

Semaphore already provides kubectl preinstalled. So what's left is to securely upload the Kubernetes configuration file inside the Semaphore environment. We generally solve this by creating a secret. A secret can be a collection of environment variable and files. Once created, it's available to all projects within an organization.

In our case, we need a secret based on a single file. Create it using sem:

The command above creates a secret based on a local file, and instructs Semaphore to make it available in /home/semaphore/.kube/dok8s.yaml. /home/semaphore/ is the default directory from which all CI/CD jobs run.

The full Semaphore configuration which mounts this secret and makes it available the CI/CD job is as follows:

If this is the first time you see a Semaphore configuration file, a quick tour of concepts will help you understand it. Here’s the gist of how they apply in this example:

Run git push and you should see a basic pipeline running on Semaphore: 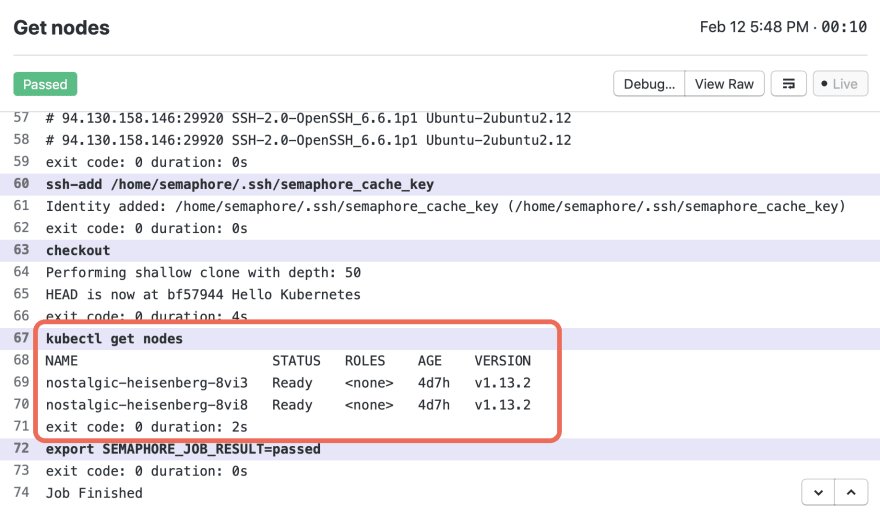 OK, we're in business! Let's proceed by setting up an actual project.

Set up continuous integration for a Sinatra microservice

Our Sinatra app is a microservice with minimal configuration and an RSpec test suite:

Let's clear our previous semaphore.yml and enter the following configuration to run CI:

We store our gems in Semaphore cache to avoid running bundle install from scratch on every commit.

We split dependency installation and running tests in separate sequential blocks for demonstration purposes. You could, of course, merge them in one.

It's necessary to run bundle install in the second block, even though cache restore will at that point always restore the gem bundle. It's a limitation on Bundler's side, but the good part is that the command will exit very quickly.

When you push the new semaphore.yml to GitHub, you'll see a real CI pipeline shaping up on Semaphore:

Deploying to Kubernetes requires us to push a Docker image to a container registry. In this example we'll use Docker Hub. The procedure is very similar for other registry providers.

These instructions will work with any Docker image. For tips for Sinatra, check out my earlier post:

Pushing to a container registry, public or private, requires authentication. For example, when you're using Docker Desktop on Mac, you're automatically authenticated and communication with Docker Hub just works. In CI/CD environment, we need to make credentials available and authenticate before doing docker push.

Following the Docker Hub instructions available in Semaphore documentation, we need to create a secret.

Use the sem CLI to create the secret, and remove the source file after you're done:

You can verify that it worked with:

We now have what it takes to push to Docker Hub from a Semaphore job.

With Docker build and push operations we are entering the delivery phase of our project. We'll extend our CI pipeline with a promotion and use it to trigger the next stage.

At the bottom of semaphore.yml, define a promotion:

With auto_promote_on specified above, our Dockerize pipeline will run on every change in every branch. You could customize that behavior with additional conditions.

In the first command we authenticate with Docker Hub using the environment variables defined in the my-dockerhub secret.

We’re using Docker layer caching to speed up the container build process. First, we try to pull a previously built image from the registry. If this is the first time we run this operation, this step will be skipped and not fail.

By using the --cache-from flag with docker build, we’re reusing the layers from the pulled image to build the new one faster.

Note that we’re not creating a new version of the latest tag. We’re going to do that only after a successful deploy.

Once you replace the image name with your own, you should have a pipeline in a state similar to this:

The job log shows that the container image has been created and pushed: 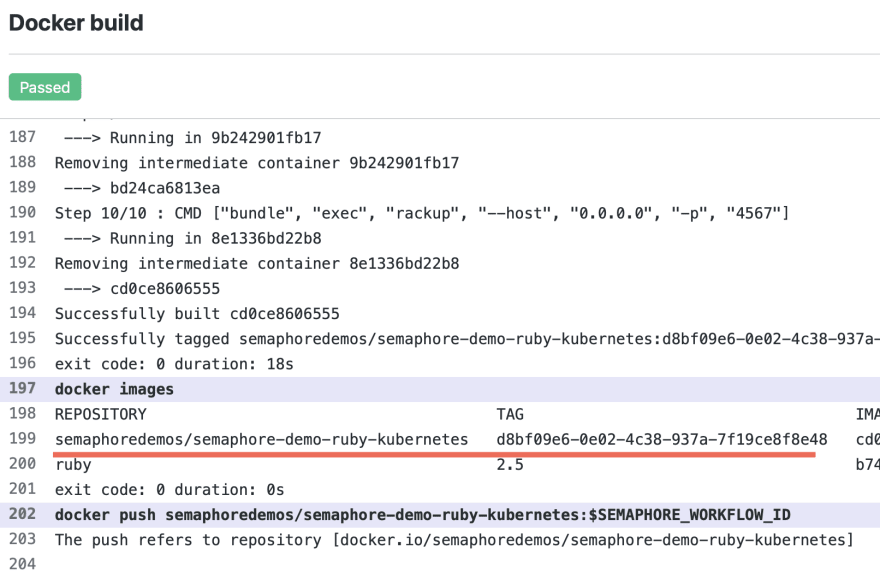 And your Docker registry contains the latest images: 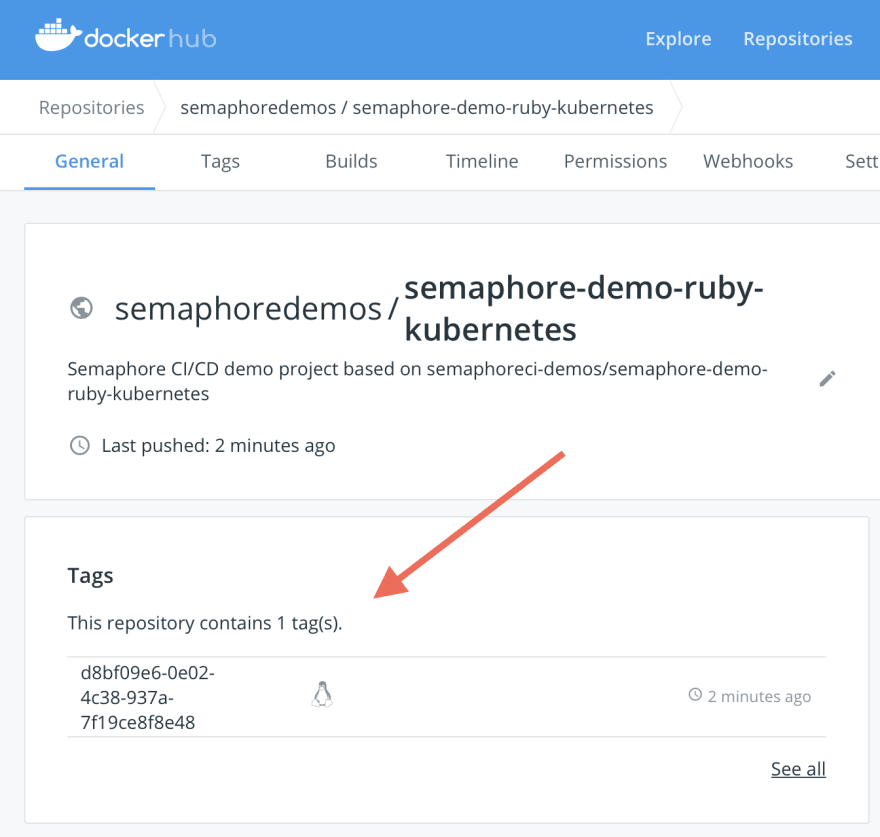 Back on the DigitalOcean's Kubernetes cluster page, the "Getting Started" section includes examples to "Deploy a workload". We can use the example provided for nginx and modify it for our app.

In the example configuration, you'll notice a reference to a source container image:

If your Docker image is private, you'll need to enable the Kubernetes cluster to authenticate with the Docker registry. The way to do that is, once again, by creating a secret, only this time on the Kubernetes cluster's end. For demonstration purposes, I will show you how to do this, even though the image that we're using in this tutorial is public.

Run the following command on your local machine to create a docker-registry-type secret on your Kubernetes cluster:

You can verify the secret by running:

As on Semaphore, Kubernetes secrets are base64-encoded and the output will look similar to:

Create a new file in your repository, for example called deployment.yml:

Comparing to the nginx example provided by DigitalOcean, we've pretty much only substituted the application and image name. Since Semaphore is tagging images using SEMAPHORE_WORKFLOW_ID environment variable, we're using it here as well.

The deployment configuration file as it appears now is not valid YML. The plan is to use a Linux utility called envsubst (also available on Mac via Homebrew) to replace $SEMAPHORE_WORKFLOW_ID with its value within a Semaphore CI/CD job.

Our deployment manifest however is not yet complete without a Kubernetes load balancer which will expose the deployed service on a public IP address. Add the following content to the same file:

You can verify that the Kubernetes configuration works as intended from your local machine by replacing $SEMAPHORE_WORKFLOW_ID with latest and running:

Start by defining a manual promotion:

Finally, let's define the deployment pipeline. It has two jobs: to apply a new Kubernetes configuration and to create a new version of our latest container image, which we're treating like master branch in Git (your practice may vary).

Once we push a new version of configuration to GitHub, Semaphore runs our pipeline. Once the Docker build pipeline is completed successfully, click on the "Promote" button to trigger the deployment:

You can now run kubectl get services or open the Load Balancers list on DigitalOcean > Networking tab section to find the public IP address of your microservice:

And test it out:

Congratulations! You now have a fully automated continuous delivery pipeline to Kubernetes.

Deploy a demo app for yourself

Feel free to fork the semaphore-demo-ruby-kubernetes repository and create a Semaphore project to deploy it on your Kubernetes instance.

Here are some ideas for potential changes you can make:

This article is based on an episode of Semaphore Uncut, a YouTube video series on CI/CD:

Thanks for reading! 🙌 Please give me feedback, and I'll be happy to answer any questions you may have in comments.