Note: This series assumes the reader is familiar with using the command line and has used basic git commands during development. The series aims to provide examples of using lesser known git commands that improve development experience and reduce friction during collaboration across the team.

Before we dive in, it helps to imagine a scenario in which git is used in a modern development team. A project's original source code is usually stored in a remote server provided by a 3rd party git service such as GitHub. Each team member then forks this repo, clones the fork, to work on their changes and then eventually merge it back to the original source code via a Pull Request. This is one of the many approaches to using git, called Forking Workflow

If that didn't make much sense, don't worry. We will look at each step in detail, using a demo repository and cover some useful commands that will help you collaborate better.

Remote repository refers to repository hosted by GitHub on their server. Note that forking isn't a special git command. All it does is make a copy of the remote repository in your own remote server. Here's an example repository, (wittily named "Spoon-Knife") you can fork to see for yourself.

Now that you forked to create your own remote copy of the original repo, you can copy it to your local machine to begin work.

It's really easy to make a copy of a repository. git clone <repository>. <repository> here refers to the location of the repository to copy from. Could be a local file path, or a remote url. In this case you'd be using a remote url like such example. Try cloning the fork you made in Step 1.

Okay you've forked octocat/Spoon-Knife to your own remote repository, and you've cloned a copy of your remote git repository to your local machine. That's three repositories that must be kept in sync so that individual contributions from the rest of the team doesn't cause issues:

Changes are pushed from Local to Origin and merged from Origin to Upstream. It is possible, that while you are working on your changes, other developers have merged code to Upstream. So it is important you regularly check if Upstream has changes, that you need to synchronise. Sounds complicated, but git makes it really easy to do this.

"Spoon-Knife" doesn't have a "development" branch, so we will fetch the master branch. Before that run git status to check the current status of your local repository.

On branch master suggests that we are already on the master branch. The local master branch was set to track the remote branch at my server side copy: origin/master when the repository was cloned and is currently up to date with it. We also see that the working tree is clean (We will explore what this means soon).

Good! We have successfully set up everything we need to begin working on our feature. Before that, let's recap what we have done so far. 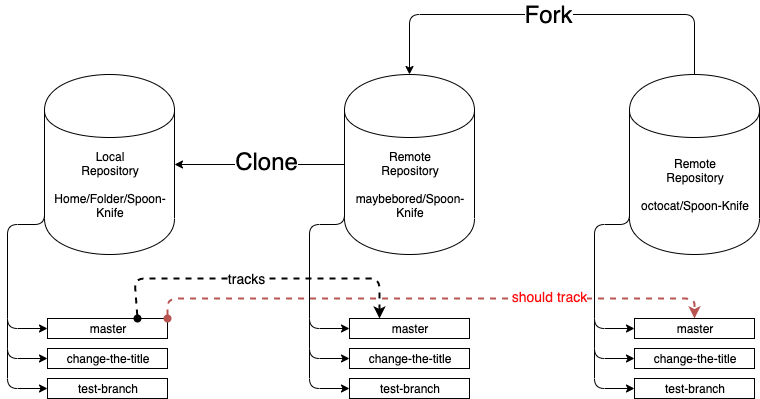 In the next post, we will explore two more commands (git stash, git rebase) that will make fast-paced development a bit less painful.

Building an AWS Cross-AccountCodePipeline with GitFlow