Note: This series assumes the reader is familiar with using the command line and has used basic git commands during development. The series aims to provide examples of using lesser known git commands that improve development experience and reduce friction during collaboration across the team.

Part 1 covered how to set up git for your project, so you can collaborate better. Part 2 is about git stash and git rebase - two commands I use regularly when collaborating on tasks.

While working in a team, there might be situations where you'd have to temporarily put away your current work, to work on something of higher priority, and git stash helps you stash your work away and clear your working directory.

It helps to understand about the three stages, that your changes are moved to and from in a git repository, before we dive into git stash. 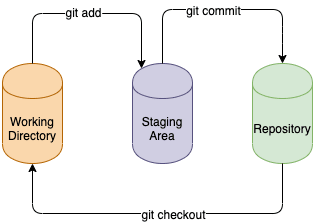 So in between all these stages, git stash pushes all the changes in the working directory to a special directory called stash.

Imagine a scenario, where you started working on a feature, but you're not nearly ready to commit these changes, and your teammate asks you to work on a different feature branch, because it is of higher priority.

To start off you'd need to clean your working directory, and save your existing changes somewhere safe.

Notice how after running git stash, the working directory becomes clean, that's because all the changes have been pushed elsewhere. Let's take a look at it.

It's what it sounds like, this commands lists down all the changes you stashed. We've stashed one such change. Let's look at where they've been saved.

Let's find out how we can retrieve changes from a stash to the working directory. There are two ways to do this: git stash pop and git stash apply. pop removes the stash before applying it, apply does the same but doesn't remove the change set from the stash.

Notice how the stash is empty after popping.

The stash remains the same after using apply.

Use this command when you want to delete an outdated stash from you list.

When you want to clear the entire list, use git stash clear.

git rebase applies your commits on top of another branch's tip. A diagram would explain this better.

This command allows you to be able to move your commits, making this a very powerful command, used for different purposes. Let's look at a few scenarios.

Branch feature and branch Development have one commit each and therefore in git terms, have diverged. By rebasing feature on Development, all the commits of the feature branch will be replayed on top of the latest commit in the Development branch.

Notice how after rebasing the commit hash changes, this is because git creates new commits behind the screen, and stops pointing to the old commits.

Merging feature_branch to Development would now result in a fast-forward merge, which means there will be no conflicts to resolve during the merge. A bit more about Git Merge.

Git Rebase essentially allows for moving commits around. Since git commits are record of history, by moving them around we can indeed rewrite history.

Here's a quick overview of ways you can change history:

You might have accidentally committed some changes. To undo that you can drop it from the history.

Consider a series of commits in which you fixed typos. Consider squashing all of them together to make your history look cleaner.

Everyone loves meaningful and clean commit messages. Reword commits if you think it wouldn't make sense to your reviewer.

In this post, we checked out git stash and git rebase and where to use them. Check out the official documentation for advanced usage and in some depth information.

Let me know if you'd like me to continue updating this series, with more commands I run into.