I would like to give an real case example from one of the project which I work on. We were using Travis script deployment for a while and it works pretty well. The bash script which I use in our deployment process is given below:

As you can observe from the bash script, every step of the deployment is given as ssh/scp commands. There is no harm regarding to it as long as it contains few steps. However, as time pass more configurations, applications will required to be deployed, updated, modified and checked, then it might turn into headache. Therefore, having well structured deployment steps using Ansible will put us to safe side.

Before jumping into deployment with Ansible, I would like to point out some factors which can be counted as disadvantages of not integrating Ansible to deployment process.

There are many more drawbacks of using pure bash scripts in deployment process, however, these issues may not be applicable for all them.

For our case, I would like to convert our bash script given above to Ansible which has more elegant structure and easy to manage.

Overall simplified flow for deployment is given below :

As it is declared from overall picture above, we need to provide encrypted ssh key and script for decryption together, in order to use plain private key to access the server.

In this setup, Github CI will be control node which will have access to server where we would like to deploy the application.

You can keep everything default or provide some information about the questions when you run it. Once, execution of command finished, there will be public and private key, you need to append the public key to user’ authorized keys file on server. Afterwards, connection should be established, you may want to test it using traditional ssh command.

In order to use the ssh key which is generated before, we need to encrypt the key, I preferred to use gpg tool, there are many examples about it on internet, you can check it if you wish.

The command will prompt you to provide passphrase to encrpyt and decrypt the private key when required. Choose strong and long passphrase. Once it is done, include encrpyted file into git. (- which means commit it as well-)

Once they have completed, the rest is structing Ansible playbook to deploy the file to server.

I am going to create a repository on Github to demonstrate what I have described earlier in action.

For the demo purposes, I will upload a service file to server and start it, simplified version of given bash commands above.

The tasks can be extended according to user needs however to keep it short and show how Ansible could be used on continuous integration, I will continue to have minimal playbook.

The structure of the repository as following: 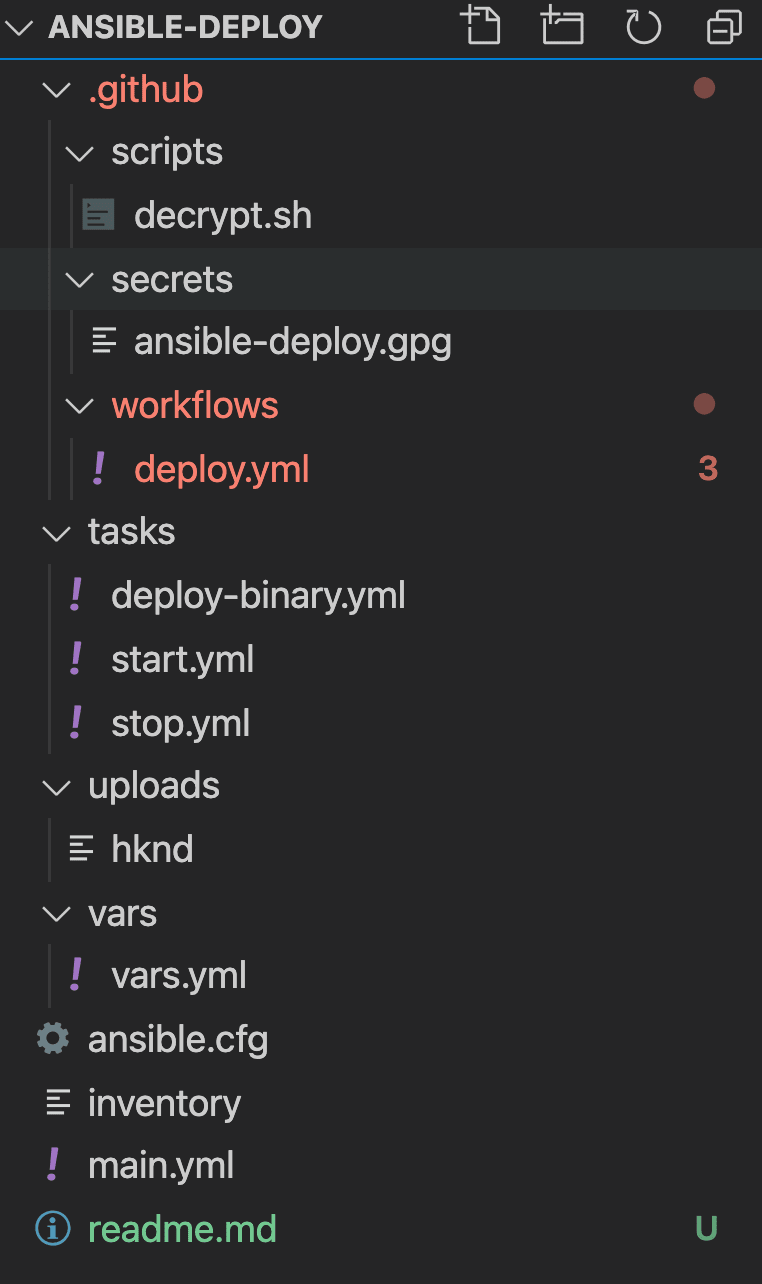 As it can be observed from the figurre above, I have only three tasks which are combined under main.yml.

Some configuration regarding to Ansible, such as private key, inventory file location declaration is saved to file ansible.cfg among ssh connection configuration.

This post is not about how to write ansible playbooks, hence, I am going to skip to explain it. If you would like to check and understand it you can check following repositories for examples;

Decrypt script is crucial file which is decrypting encrypted private key to access the server.

The workflow file for this repository is pretty straitforward to create as well, what needs to be done is that ansible should be installed into environment. Afterwards, running ansible playbook command after decrpyting the encrypted private key will complete the tasks.

The generated workflow is for giving demonstration, in normal production case, the pipeline should NOT be broken, each step from testing to production deployment should be as much as automated.

The final result from Github actions: 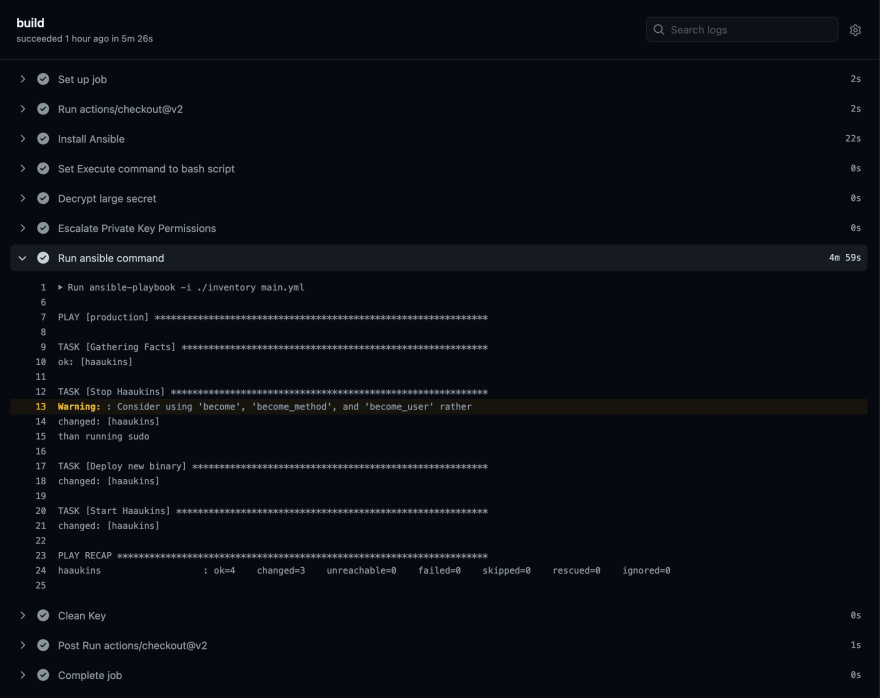 Keep in mind that this is just a minor portion of a long pipeline which has all unit tests, checks, linting and integration tests. Without proper pipeline in place, having Ansible might not be logical or required. Consider your cases when you would like to move to deployment with Ansible.

Tips to grow your business without blowing your budget.

Once suspended, mrturkmen will not be able to comment or publish posts until their suspension is removed.

Once unsuspended, mrturkmen will be able to comment and publish posts again.

Once unpublished, all posts by mrturkmen will become hidden and only accessible to themselves.

If mrturkmen is not suspended, they can still re-publish their posts from their dashboard.

Once unpublished, this post will become invisible to the public and only accessible to Ahmet Turkmen.

Thanks for keeping DEV Community 👩‍💻👨‍💻 safe. Here is what you can do to flag mrturkmen:

Unflagging mrturkmen will restore default visibility to their posts.