There are many different ways to use Git. The most common are the original command line tools and GUI (Graphical User Interfaces). Here, I will cover the most important commands you should know about when you are working with Git.

The command line is the only place you can run all Git commands. If you know how to run the command-line version you can probably also figure out how to run the GUI version. Also, while your choice of graphical client is a matter of personal taste, all users will have the command-line tools installed and available. You can read more on gits official online book.

Before we start, be sure to know how to use the Terminal in Mac or Command Prompt or Powershell in Windows and have git installed on your system.

First, you might ask yourself what is Git actually and what can you do with it? Git is a fast, scalable, distributed **revision control system* with a rich command set that provides both high-level operations and full access to internals.*

In Kolosek, we use Git for every application we create, including Ruby on Rails projects, to make it easier to work as a team and achieve our goal.

You can learn a lot about individual Git commands by running $git help command in the Terminal. This should appear: 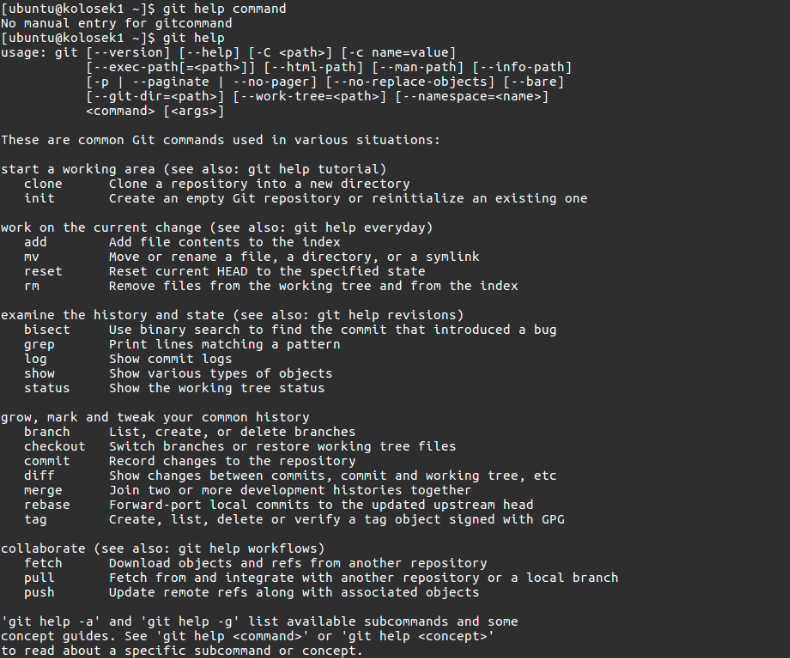 Everything can be added to your git repositories even your Controller tests!

I will cover the most commonly used command lines, starting from Git options. This will explain everything you need to know about Git on your local machine:

-C <path> command affects other options that expect path names like --git-dir and --work-tree because their path names would be made relative to the working directory caused by the -C option.

We often used these Git options when we were setting up CarrierWave example to Git. Did you have a similar experience?

This was only the first part of the tutorial! In the next one, I will cover all the other Git commands, be sure to stay tuned.

How To Make Interactive ReactJS Form

Tools to visualize the history of a git repository

Working the project with 'Team'