In a standard React application, the browser receives an empty HTML from the server along with the JavaScript instructions to construct the UI. This is called Client-Side Rendering (CSR) because the initial rendering work happens on the user's device.

This process of rendering your components and attaching event handlers is known as “hydration”.

Or As per Dan Abramov

It’s like watering the “dry” HTML with the “water” of interactivity and event handlers.

However, CSR comes with well know issues associated with it as in,

To counter above mentioned issues, React provides another approach, Server-Side Rendering (SSR), where the rendering of HTML happens on the server itself instead of the client, and sends that HTML to our users.

The key part is that each step had to finish for the entire app at once before the next step could start. This is not efficient if some parts of your app are slower than others, as is the case in pretty much every non-trivial app.

This indicates following major issues when working with SSR today:

Suspense to the rescue!

Previously, React did not support Suspense on the server, and it was only limited for lazy-loading the code on the client, this is changing in React 18.

There are two major SSR features in React 18 unlocked by Suspense:

Streaming HTML on the server

With today’s SSR, rendering HTML and hydration is “all or nothing” process.

First you render all HTML on the server.

The client eventually receives it then you load all the code and hydrate the entire app. But React 18 gives you a new possibility. You can wrap a part of the page with <Suspense></Supense>.

Let’s wrap the comment block and tell React that until it’s ready, React should display the <Spinner /> component:

By wrapping <Comments> into <Suspense>, we tell React that it doesn’t need to wait for comments to start streaming the HTML for the rest of the page. Instead, React will send the placeholder (a spinner) instead of the Comments.

Moreover, Unlike traditional HTML streaming, it doesn’t have to happen in the top-down order. For example, if the Sidebar needs some data, you can wrap it in Suspense, and React will emit a placeholder and continue with rendering the post. Then, when the Sidebar's HTML is ready, React will stream it. There is no requirement that data loads in any particular order. You specify where the spinners should appear, and React figures out the rest.

We can send the initial HTML earlier, but we still have a problem. Until the JavaScript code for the comments widget loads, we can’t start hydrating our app on the client. If the code size is large, this can take a while.

To avoid large bundles, you would usually use "Code Splitting" in other words you would specify that a piece of code doesn't need to load synchronously, and your bundler will split it off into a separate <script> tag.

You can use code splitting with React.lazy to split off the comments code from the main bundle:

Previously, this did not work with server rendering.
But in React 18, <Suspense> lets you hydrate the other sections of the app before the comment widget has loaded.

This is an example of Selective Hidration by, wrapping Comments in <Suspense>, you told React that they shouldn’t block the rest of the page from streaming and, as it turns out, from hydrating, too! This means the second problem is solved i.e. you no longer have to wait for all the code to load in-order to start hydrating. React can hydrate parts as they’re being loaded.

Interacting with the page before all the components have hydrated

Last and but not the least, there is one more improvement that happened behind the scenes when we wrapped comments in a <Suspense>. Now their hydration no longer blocks the browser from doing other work.

For example, let’s say the user clicks the sidebar while the comments are being hydrated: 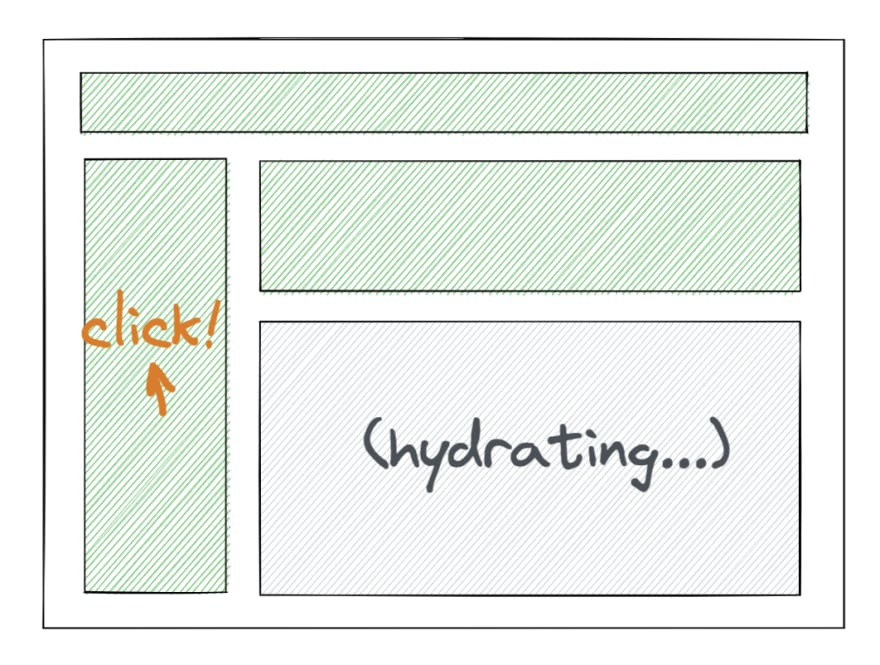 In React 18, hydrating content inside Suspense boundaries happens with tiny gaps in which the browser can handle events. Thanks to this, the click is handled immediately, and the browser doesn’t appear stuck during a long hydration on a low-end device.

In our example, only comments are wrapped in Suspense, so hydrating the rest of the page happens in a single pass. However, we could fix this by using Suspense in more places! For example, let’s wrap the sidebar as well:

Now both of them (Sidebar and Comments) can be streamed from the server after initial HTML containing other components are streamed to the client.

But this also has a consequence on hydration as well. Let’s say the HTML for both Sidebar and Comments has loaded but the code is not loaded yet. As soon as the code loads, React will start the hydration process starting with the first Suspense boundary it encounters, which is Sidebar in out case.

Now let’s say the user starts interacting with the Comments HTML which the hydration of Sidebar is going on, 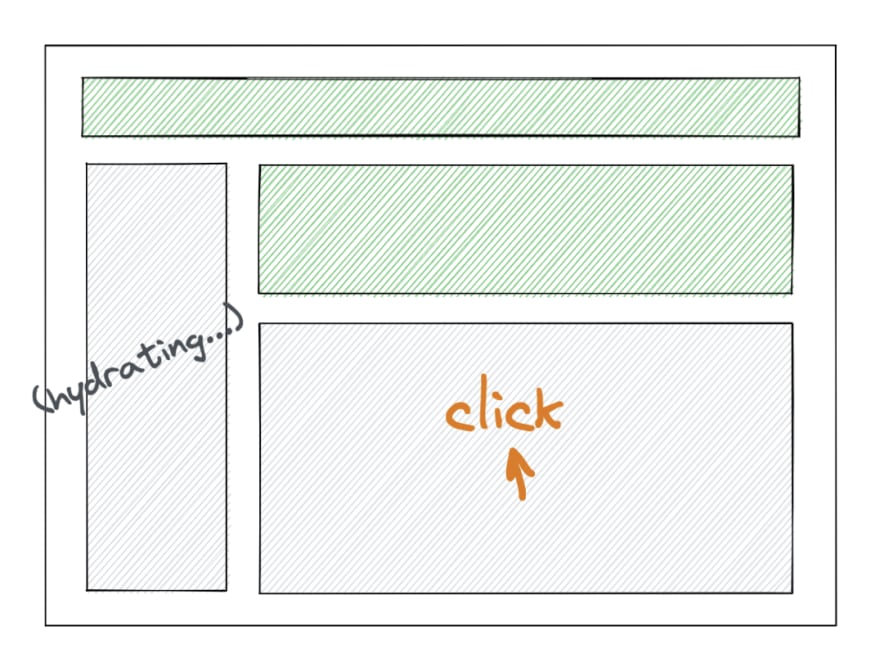 Here React will synchronously hydrate the comments during the capture phase of the click event (How cool is that!).

As a result, comments will be hydrated just in time to handle the click and respond to interaction. Then, now that React has nothing urgent to do, React will hydrate the sidebar.

React starts hydrating everything as early as possible, and it prioritizes the most urgent part of the screen based on the user interaction.

I hope this post was useful to you and helped you understand why Suspense is more than just a fancy loading spinner! 😉
This is just a high-level overview of the new SSR architecture and what problems Suspense solve, however if you want to dive deeper into this concept, you can read this superb discussion thread explained by React's team itself.
PS: This post was inspired by the discussion.

Feel free to reach out to me! 😊

Setting up Netlify Redirects with Astro

Once suspended, nischal_dutt will not be able to comment or publish posts until their suspension is removed.

Once unsuspended, nischal_dutt will be able to comment and publish posts again.

Once unpublished, all posts by nischal_dutt will become hidden and only accessible to themselves.

If nischal_dutt is not suspended, they can still re-publish their posts from their dashboard.

Once unpublished, this post will become invisible to the public and only accessible to Nischal Dutt.

Thanks for keeping DEV Community 👩‍💻👨‍💻 safe. Here is what you can do to flag nischal_dutt:

Unflagging nischal_dutt will restore default visibility to their posts.