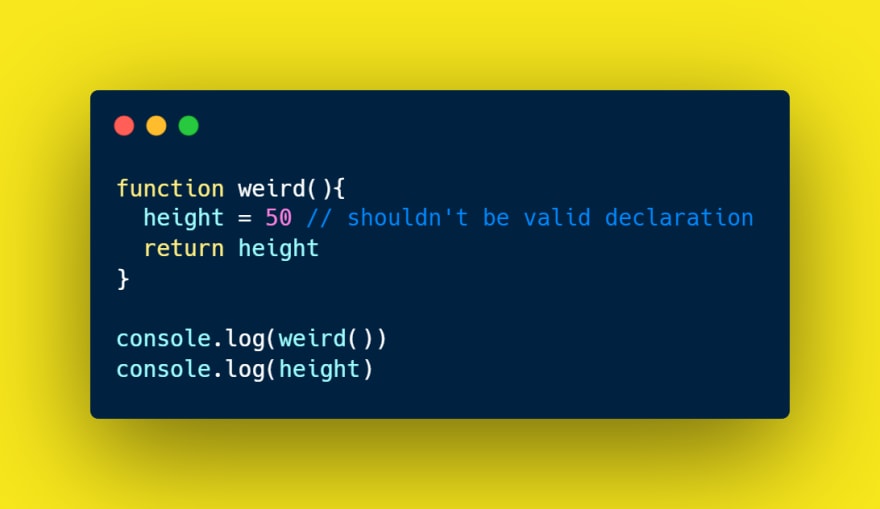 In the code sample, we didn't even explicitly declare the variable but we are able to use without any error and it is available in global scope

Issues that "use strict" fixes-

7.Prevents us from deleting an undeletable property.

Note- The "use strict" directive is only recognized at the beginning of a script or a function.

This code does not work because initializations are not hoisted. It returns undefined because we have used var here that leads to partial hoisting as discussed above.

This is because variable initialization using let or const don't get hoisted.

The term "temporal" is used because the zone depends on the order of execution (time) rather than the order in which the code is written (position). For example, the code below works because, even though the function that uses the let variable appears before the variable is declared, the function is called outside the TDZ.

The if block is evaluated because the outer var foo has a value. However due to lexical scoping this value is not available inside the block: the identifier foo inside the if block is the let foo. The expression (foo + 55) throws a ReferenceError because initialization of let foo has not completed — it is still in the temporal dead zone.

Once suspended, pranav016 will not be able to comment or publish posts until their suspension is removed.

Once unsuspended, pranav016 will be able to comment and publish posts again.

Once unpublished, all posts by pranav016 will become hidden and only accessible to themselves.

If pranav016 is not suspended, they can still re-publish their posts from their dashboard.

Thanks for keeping DEV Community 👩‍💻👨‍💻 safe. Here is what you can do to flag pranav016:

Unflagging pranav016 will restore default visibility to their posts.