Have you ever stored some piece of information in the computer and wondered how the computer represents these information? Well, for you it might seems like a bunch of text or a bunch of numbers. But the computer sees this information differently. This is the reason why the computer can perform more rigorous and complex computations than all the human efforts combined. This is made possible through the concept of ”Data Types”.
Because the computer knows how to represent this data in the memory, that is why it can manipulate the data so well. A human will out of the box tell you that 1 + 1 = 2, but a computer can’t directly give you the answer without first checking how the expression is represented in the memory. This is where the concept of data types comes to play.

What is a Data Type

A datatype is an attribute of a data which tells the computer how a data is to be used. The data type of a variable defines the meaning of a data, the operations that can be performed on that data, and how the data is stored in the memory.

Python provides for us a rich set of built-in data types that can be used in programs without creating them from scratch. However, you can also write your own data type in Python to add some of the custom features not included in the ones provided by Python.
This article discuses some of the basic data types in Python.

An integer is a whole number, it can be positive or negative. In Python, there is no limit to how long an integer can be. It can be as long as you want it, except that it is constrained by the memory of your computer. Numbers like -1, 0, 3, 99999999999999999 are a perfect fit for integers.

You could also append the letter e or E followed by an integer to represent a scientific notation. 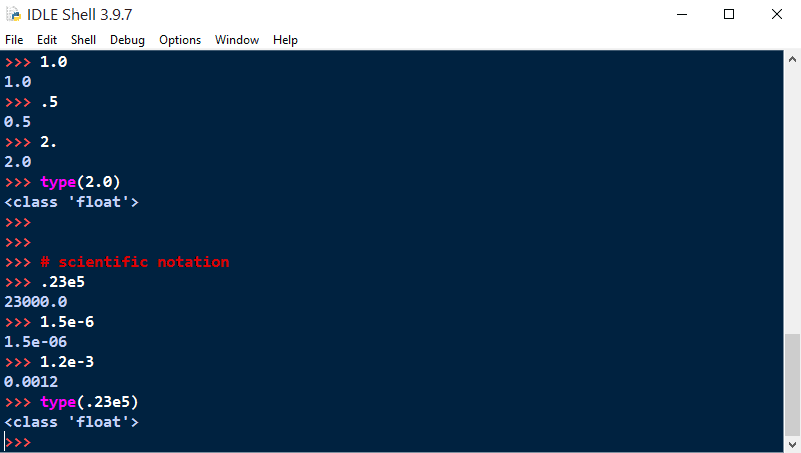 Python represents floating-point numbers with 64-bit double-precision values in almost all platforms. This implies that the maximum value a floating-point number can be is approximately 1.8 ⨉ 10308. Any number greater than this will be indicated with the string inf implying Infinity.

Similarly, the minimum value a floating number can be is 5.0 ⨉ 10-324. Any number smaller than this will be effectively zero. 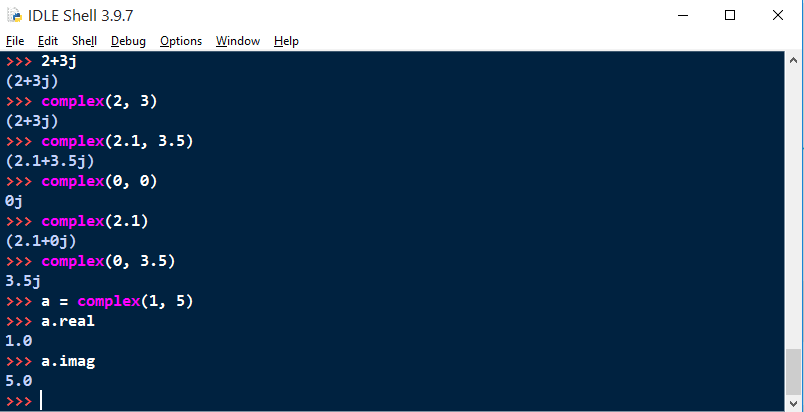 Boolean values in Python are used to represent truth values. They consist of constants True and False. Boolean values can also behave like integers when used in numeric concepts, where True evaluates to 1 and False evaluates to 0.
Python provides for us the in-built function bool() which can be used to convert any value to a Boolean. The bool() function takes in an input and returns the boolean values True or False depending on the input. By default, the output is True. It is False if it falls under any of the following: 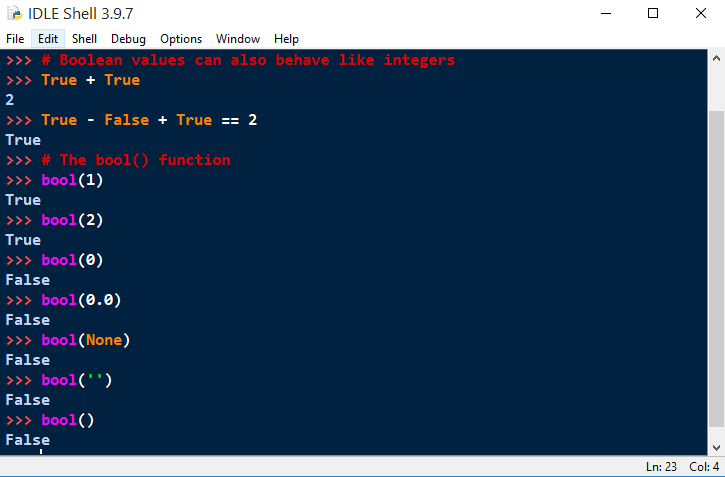 Boolean values are handy when using conditionals and loops such as if … else, while, for in your programs. The truth value of a boolean expression is what determines whether a particular section of code is executed on not as in loops and conditionals.

In Python, a sequence is an ordered collection of data. This data can be similar or different data types. Some of the sequence types in Python include:

A string is a sequence of letters, space, punctuation marks, or even numbers. It is an immutable sequence of code points. Python handles any form of textual data using the str object. Unlike integers, strings are represented differently in the computer’s memory that is why they cannot be used to perform arithmetic operations.

Strings are represented using either single, double, or triple quotes. Python does not have a type for a single character. A single character is a string with a length of 1.

When accessing string elements using indexing, ensure that the index is within the range of the string. If the index entered is out of range, Python will throw an IndexError.

A list is a mutable sequence of data that is used to store data. List in Python is similar to arrays in other languages, but they don’t have to be of the same type. A list can be created either by using a pair of square brackets containing iterables or using the type constructor list() that takes in an iterable.

An iterable is any sequence or container that can be iterated upon (loop through).

Tuples in Python are immutable sequences of data that cannot be modified after they are created. Similar to lists, tuples can contain different data types and the elements are accessed using indexing.

Tuples are created using the built-in tuple function that takes in an iterable. They are also created with or without the use of parentheses containing the tuple element. A tuple can also contain a single element, but the element must have a trailing comma for it to be a tuple.

Python has a bunch of built-in types that you can checkout here. While these types are handy to use and provides basic functionalities, Python also allow you to write your own data structures that can be used as types and add more custom functionalities to it.
This article discussed the basic data types needed to get you started in your Python journey. To know more about Python built-in data types, checkout the official documentation.

Best Practices for designing an UI

Step Functions for making your text based images searchable

Steps For Troubleshooting your Code