That was me circa 2007 when I ran my first conference in Boston. Thankfully it was a success and I've run a lot of developer conferences since then in Boston, Miami, New York City and even Sofia, Bulgaria.

Recently, a friend reached out thinking of planning his own developer conference and this post is based upon the advice I gave him about running your own developer conference. My advice assumes you are relatively new to running events and are running one out of your own pocket or with a limited budget from your company. Obviously, it is based upon my experiences, so I'd love to hear from any of you who have run events if you agree or disagree with any of my advice. Also, if you are thinking about running an event, I'm happy to answer additional questions, so ask away in the comments. 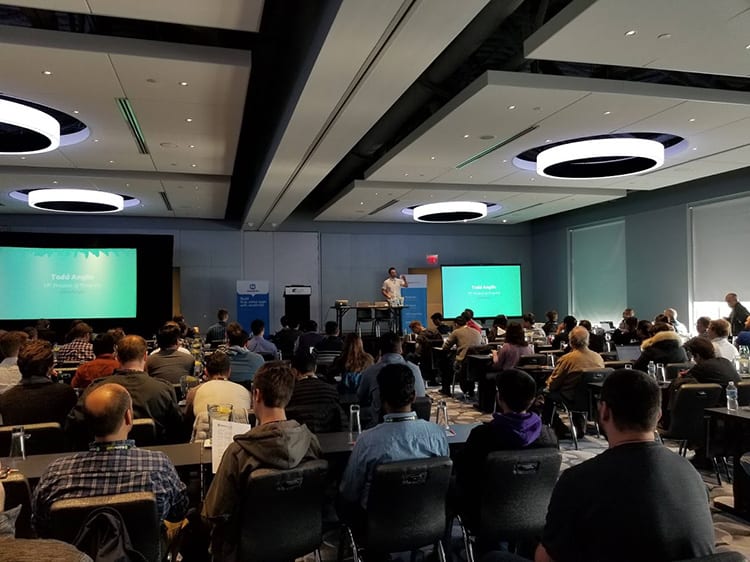 How Big Should My Event Be?

The size of the event has been, in my experience, a complicating factor that can really impact how you proceed with your planning. Obviously, you should consider the topic (is it broad or niche? how big is the community you are targeting?), but, beyond that, you should really think about the size of the event in terms of how it can impact the cost and difficulty of planning.

What I've found in multiple cities is that any event over 250-300 won't fit in a venue other than a hotel conference center or convention center. While these venues are nice and can take care of a lot of logistical details during the event that other venues may not, they are also exponentially more expensive. Typically you have to use the venue's catering and often even their A/V. Sometimes you may even have to purchase WiFi or guarantee a number of rooms are sold. All of these increase you or your employer's financial risk, which you'll likely want to limit for your first event, unless you have a significant budget being provided to you.

A smaller event opens up some unique and interesting alternative venues. For example, universities or theaters (either stage or movie) generally have seating no more than the 300-350 range, but come with a much lower rental cost and fewer other requirements. Many provide things like WiFi and A/V at no additional cost and often even let you choose your own catering. The trade off is that you may need to handle a lot of logistics that the expensive venues would handle for you. For example, for one event in Boston I couldn't ship items so I had them all waiting at a colleague's house nearby and I ended up dragging a vat of coffee from the Starbucks down the street each morning to the event.

While I love these "alternative venues", the other aspect to considering them is that you may need to have an open mind about the structure of your event. Personally, I love single track events, but if you are looking for multi-track, it can limit your options a bit. Or if you need classroom style rooms for hands-on workshops, that will likely also be harder to find. Sometimes you can get creative and find interesting workarounds, but you will need to be flexible. 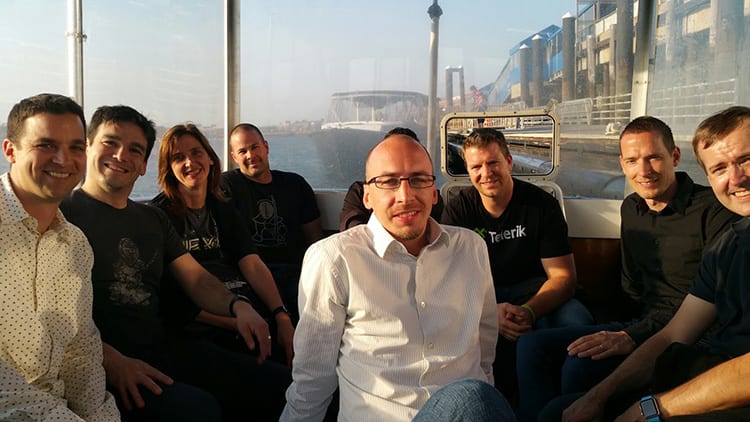 A boat ride with speakers and colleagues at TelerikNEXT in 2015

How Many Speakers Should I Have?

As you would expect, this is going to depend on a bunch of factors including the number of days, number of tracks, how long the day lasts and how long the sessions are. Once again, a big factor here is budget. The value of your event largely comes from the quality of your speakers, so, even if you are a low-priced community event, none of your speakers should have to pay their way to speak. Plan to cover airfare and hotel at a minimum for every out-of-town speaker. Some speakers whose jobs support or require them to speak will sometimes not need you to cover their travel, but it's best to budget as if you'll be covering everyone.

So, the cost of bringing speakers factors heavily into not how many speakers you need so much as how many you can fairly bring. In terms of schedule, I personally don't recommend more than 40-45 minutes for standard sessions, though a keynote may be longer. This means that typical day with breaks, lunch and time between sessions means that you'll need 6-7 speakers per track per day.

How far out to plan?

My first event was planned and completed in under 60 days. It worked but I would not recommend it. Some venues can start to get booked up as early as a year in advance. You can generally put a free hold on a date, meaning if someone else comes asking for the same date you'll have the right of first refusal. Thus, there's no harm in planning early (though some stage theaters sometimes don't know their show schedule that far out and so may not be willing to fully commit to dates that far out).

Speakers also tend to get booked up pretty early. Many larger conferences have CFPs that are 6-8 months before the actual event. The sooner you get started, the better (though, once again, starting too soon can make it hard for some folks to commit that far out).

I've generally started by finding the right venue first as much as a year out, though 4-6 months is generally plenty. Venue availability will impact your dates, which you'll want to be sure to research as best you can for competing events, holidays and even school schedules to be make sure you pick the date that gives you the best chance for success. Once you have a venue at the very least on a hold commitment for specific dates, you can start to talk to speakers or open a CFP. You can also begin to create a sponsor prospectus. 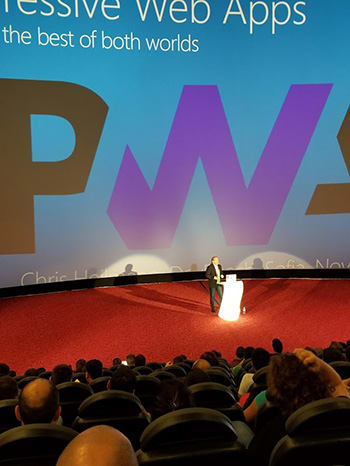 When Should You Start Promoting?

I generally don't announce until I have the venue secure (with a contract signed and approved) and some initial speakers lined up. For my latest event, I already started promoting it a good 7 months in advance, but most people aren't going to be ready to commit until 4-5 months in advance. In fact, in most cases the majority of your ticket sales will come during the final month before the event, if not even the final couple weeks. I know this pattern and yet I pull my hair out every time and freak out about 2 months prior. I'd stop freaking out, but conference planning is such that I cannot determine clearly whether things worked out because I freaked out or in spite of my freaking out. To play it on the safe side, unless by some miracle my event is sold out well in advance, I plan on freaking out again in the future.

Why I freak out gets me to the next question.

What's the Most Difficult Part?

The single most difficult part of planning every event I ever planned has always been the same: getting the word out. Especially if you are running on a limited budget, there are no easy routes. I've tried throwing money at ads on social media and elsewhere, but the costs add up and, while I can't claim to be an expert at utilizing them, I've had little to no success with them. Some newsletters can be a valid route if they target your specific audience, but they may be out of reach in terms of budget and don't allow for the regional targeting that is more effective (as you may have guessed, the further away from your event you get, the more difficult it is to convince someone to attend).

Your speakers can help you spread the word but it isn't really fair to demand or expect too much from them (they are already your best promotion simply by speaking and providing valuable content someone will pay to see).

Really, the most effective method I've found it basically grassroots groundwork. Reach out to your friends and connections. Reach out to relevant newsletters and sites and see if they'll include it for free (but don't go in with any presumptuous expectations). Reach out to local and regional meetup organizers and see if they might be willing to share it with their members or, better yet, show up at those meetups if you can. Reach out to employers in the region who may have groups of employees they might want to send.

When it comes to promotion, there is literally no idea that isn't worth considering. Just be kind and always stay above board.

What are Some Memorable surprises?

I've been very fortunate never to have to deal with anything major. Some of my early events were in early December and mid-November in Boston, so I had a few years where we had an early winter snow or ice storm. While weather is something out of your control, obviously, it is a good reminder to consider the risk of weather during certain times of the year.

I've also had speakers need to cancel last minute due to a personal emergency. That will happen from time to time. Be understanding even if you are under a lot of stress.

You may find a final surprise in the end after planning your first event. You started this journey because you enjoyed attending conferences and learned a lot from the experience. However, running a conference is not attending a conference. I've rarely had the opportunity to sit through many sessions at my own events - there are a lot of demands on my time, most of them dealing in managing logistics. Nevertheless, it can be a hugely rewarding experience that is mostly about the the opportunity to interact with both speakers and attendees. Enjoy it and good luck!

Main developer roles of 2021: Where do you fit in?

5 steps for performing well in a new job

Before I land a job as a developer, mistakes that I've made by learning how to code by myself

Brian Rinaldi
Brian Rinaldi is a Developer Experience Engineer at LaunchDarkly. He's spent over 20 years as a web developer and his current passions are the Jamstack and GraphQL.
Tips for Running Your First Virtual Conference
#career
Tips for Running Virtual Meetups and Events
#career #discuss
What's Wrong with the Tech Interview Process?
#career