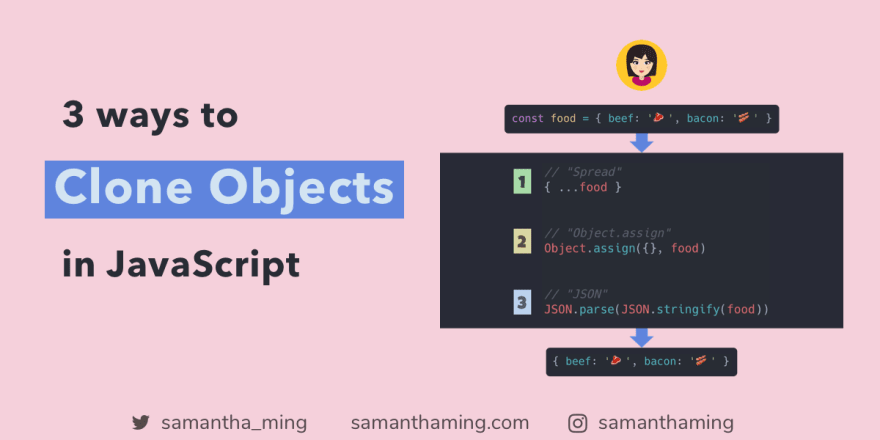 Because objects in #JavaScript are references values, you can't simply just copy using the =. But no worries, here are 3 ways for you to clone an object 👍

Your first question might be, whey can't I use =. Let's see what happens if we do that:

So far, both object seems to output the same thing. So no problem, right. But let's see what happens if we edit our second object:

If you want to learn more about this, check out Gordon's Zhu Watch and Code course. It's free to enroll and watch the video "Comparison with objects". He gives a super awesome explanation on it.

Using spread will clone your object. Note this will be a shallow copy. As of this post, the spread operator for cloning objects is in Stage 4. So it's not officially in the specifications yet. So if you were to use this, you would need to compile it with Babel (or something similar).

Alternatively, Object.assign is in the official released and also create a shallow copy of the object.

This final way will give you a deep copy. Now I will mention, this is a quick and dirty way of deep cloning an object. For a more robust solution, I would recommend using something like lodash

Here's a comment from the community. Yes, it was for my previous post, How to Deep Clone an Array. But the idea still applies to objects.

Alfredo Salzillo: I'd like you to note that there are some differences between deepClone and JSON.stringify/parse.

@OlegVaraksin: The JSON method has troubles with circular dependencies. Furthermore, the order of properties in the cloned object may be different.

When I used spread ... to copy an object, I'm only creating a shallow copy. If the array is nested or multi-dimensional, it won't work. Let's take a look:

So we changed our cloned object by changing the city. Let's see the output.

A shallow copy means the first level is copied, deeper levels are referenced.

As you can see, the deep copy is a true copy for nested objects. Often time shallow copy is good enough, you don't really need a deep copy. It's like a nail gun vs a hammer. Most of the time the hammer is perfectly fine. Using a nail gun for some small arts and craft is often case an overkill, a hammer is just fine. It's all about using the right tool for the right job 🤓

Unfortunately, I can't write a test for spread because it's not officially in the spec yet. Nevertheless, I included it in the test so you can run it in the future. But the result shows Object.assign is a lot faster than JSON.

@d9el: It's important to note that Object.assign is a function which modifies and returns the target object. In Samantha's example using the following,

{} is the object that is modified. The target object is not referenced by any variable at that point, but because Object.assign returns the target object, we are able to store the resulting assigned object into the cloneFood variable. We could switch our example up and use the following:

Obviously, the value of beef in our food object is wrong, so we can assign the correct value of beef using Object.assign. We aren't actually using the returned value of the function at all, but we are modifying our target object which we have referenced with the const food.

Spread on the other hand is an operator which copies properties of one object into a new object. If we wanted to replicate the above example using spread to modify our variable food...

... we get an error, because we use spread when creating new objects, and therefore are assigning a whole new object to food which was declared with const, which is illegal. So we can either choose to declare a new variable to hold our new object in, like the following:

or we could declare food with let or var which would allow us to assign a whole new object:

💬 What other ways do you know how to clone an object? Drop them in the comments 🙃