Photo by David Clode on Unsplash

Continuous integration has changed the way we develop software. But a CI environment is different from production, and synthetic tests are not always enough to reveal problems. Some issues only appear when they hit production, and by that time, the damage is already done. Canary deployments allow us to test the waters before jumping in.

What Is Canary Deployment

In software engineering, canary deployment is the practice of making staged releases. We roll out a software update to a small part of the users first, so they may test it and provide feedback. Once the change is accepted, the update is rolled out to the rest of the users.

Canary deployments show us how users interact with application changes in the real world. As in blue-green deployments, the canary strategy offers no-downtime upgrades and easy rollbacks. Unlike blue-green, canary deployments are smoother, and failures have limited impact.

A canary release is an early build of an application. Splitting stable and development branches is a widespread strategy in the open-source world. Many projects use an odd/even numbering scheme to separate stable from the non-stable version.

Often companies publish canary versions of their products, hoping that tech-savvy or power users want to download and try them out. Examples of companies canarying their applications are Mozilla and their nightly and beta versions of Firefox, and Google, with its canary release channel for Chrome. 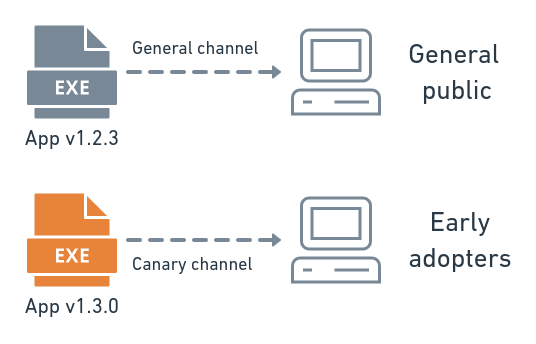 In a canary deployment, on the other hand, we install the update in our systems and split the users into two groups. A small percentage of them will go to the canary while the rest stay on the old version, as a control. 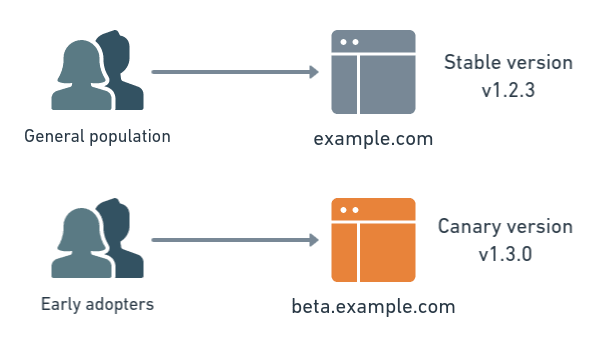 Later, once we have taken the time to evaluate the canary version, we can decide to migrate the rest of the users to the canary or roll everyone back to the old version.

As we’ve seen, canary deployments involve running two versions of the application simultaneously. We’ll call the old version “the stable” and the new “the canary.” We have two ways of deploying the update: rolling deployments and side-by-side deployments.

Let’s see how they work.

In a rolling deployment, we install the changes in waves or stages—a few machines at a time. The others continue running the stable version. This is the most straightforward way to do a canary deployment. 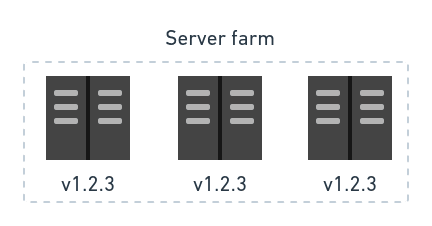 As soon as the canary is running on one server, a few users begin seeing the updates. 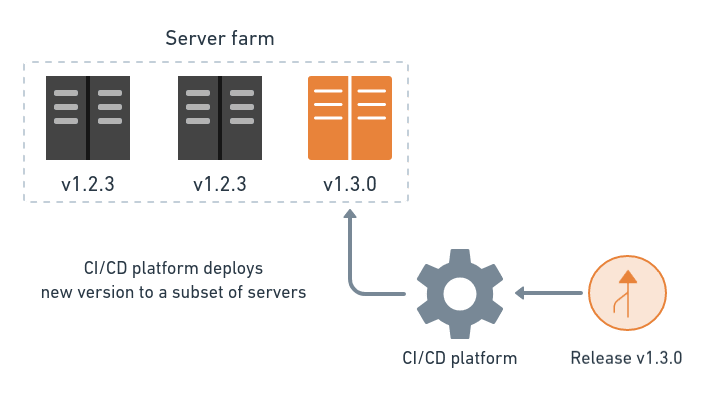 While this happens, we watch how the upgraded machines are doing. We check for errors and performance problems, and we listen for user feedback.

As we grow confident in the canary, we continue installing it on the rest of the machines, until they are all running the latest release.

If we detect a failure or get disappointing results, we can undo the change by rolling back the upgraded servers to their initial state.

The side-by-side strategy has a lot in common with blue-green deployments. Instead of upgrading the machines in stages, we create a whole new duplicate environment and install the canary version there.

Suppose the application runs on multiple machines or containers, a few services, and a database. 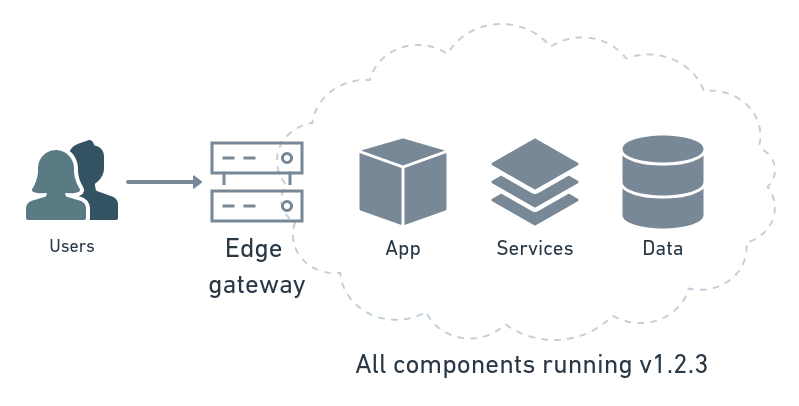 To make the deployment, we clone the hardware resources and install the updates. Once the canary is running on the new environment, we show it to a portion of the user base. This typically happens using a router, a load balancer, a reverse proxy, or some other business logic in the application. 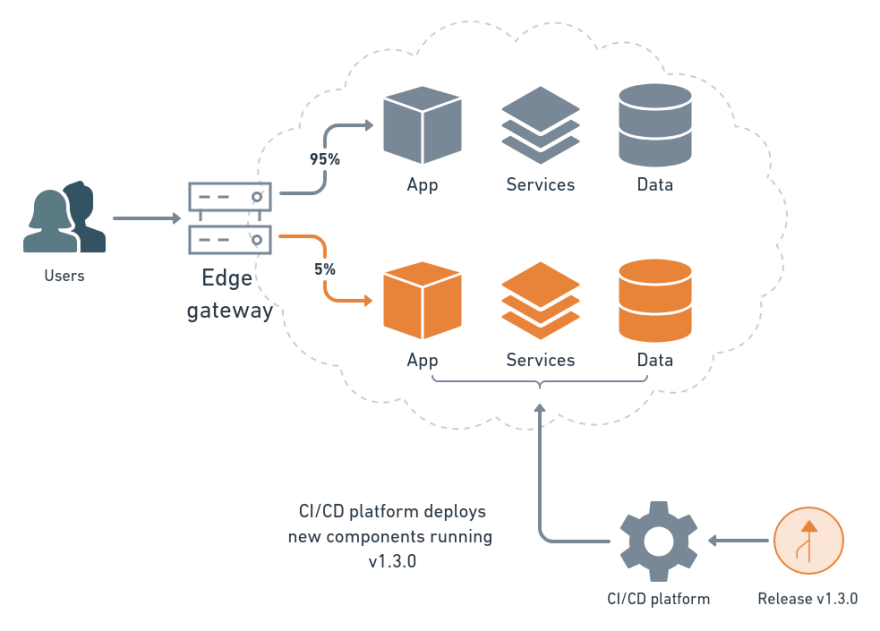 As in rolling deployments, we monitor the canary while we gradually migrate more and more users away from the control version. The process continues until we either detect a problem or all users are on the canary.

Once the deployment is complete, we remove the control environment to free up resources. The canary version is now the new stable.

Why go to the trouble of implementing a canary strategy? The benefits are many:

The idea of using a canary as an early warning system has a long history. Long before Google or Netflix used them, coal miners carried real canaries along to find gas leaks. When these little birds—more susceptible than humans to the odorless fumes—checked out, it was time to get out of the mine.

Kubernetes deserves a separate section because it’s specifically designed to deploy complex distributed systems. Kubernetes is a popular orchestration platform that has built-in tooling for rolling and side-by-side deployments. This platform is ideal for canary deployments as it allows us to deploy, update, and scale applications using only code.

If you want to learn about Kubernetes and see a step-by-step canary deployment in action, download this free ebook:

We have to take into account a few things when planning a canary deployment: 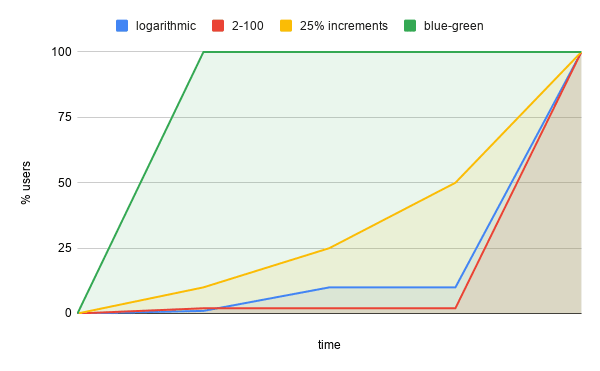 Once we have planned stages, we have to define how we’ll pick the users participating in the canary:

The best selection criteria may combine different strategies. Facebook, for example, uses multiple canaries. The first one is deployed internally and goes to its employees. Then, a second wave goes to a small portion of the users. Later, they gradually ramp it up to the whole population.

Canaries Are Not for Everyone

We’ve discussed the benefits and drawbacks of blue-green deployments in a previous post. Now that we learned about canaries, the million-dollar question is: which is better?

There are many variables to take into account and never a single answer that works for everyone. But as a rule of thumb we should consider binary blue-green deployments if any of these is true:

Canary is probably a better choice when:

The real test comes when people start using our software. Canary deployments allow us to do controlled trials with real users. When we combine this strategy with a fast CI/CD workflow, we get a productive, feature-rich release cycle.

What Is Blue-Green Deployment?

Download a free ebook: CI/CD with Docker and Kubernetes.
Thanks for reading!