At the beginning of the Salesforce Development times, before Aura Framework, developers used Visual Force, which is an HTML Tag-based mark-up language to develop their Visual Force web pages and Apex to control the internal logic.

But this HTML based Visual Force standards were not compatible to build large scale enterprise solutions and complex applications. So, developers needed something that could support the ongoing huge demand for web-based applications with complicated business logic.

Since the time the web technology is being changed every day, seeing an unprecedented change in JavaScript Frameworks, redefined way of creation of a web page, and more. Lightning Component also has to become Lightning web components to accommodate the newest technologies in Salesforce Development.

What is Lightning Component? – The Era of Lightning Aura

After Google has released Web Components to the Google Chrome browser, all the major web browsers like Firefox, Safari, or Edge started to adopt it faster. Salesforce Development had to keep up the pace and standardization’s of the Web Components according to the huge demand of the web Components across the internet.

Lightning Web Components is an extension of Lightning Components, keeping all the good aspects of the famous Aura Framework

Why Choose LWC Over Aura?

It is basically used to create, update, read and delete a record without any using Apex Code. Similarly, LWC can also leverage LDS by accessing data and metadata from all Standard and Custom objects.

Syntax Differences can be as follows: 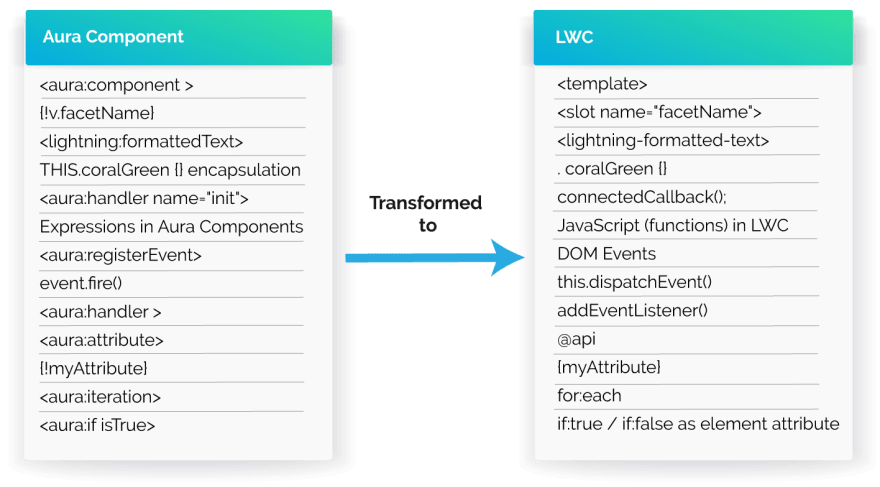 {!expression} (Bound Expressions)
Data updates in either component are reflected through bidirectional data binding in both components. Similarly, change handlers are triggered in both the parent and child components.

LWC brings with it all the good things about modern JavaScript and Web Components in a lightweight framework.

If your Planning to Migrate your Org from Classic to Lightning, then you should go for LWC to build custom pages as per better performance. As it provides great UI Performance on browsers which enhances the latest features of JavaScript.

LWCs are the future of lightning development.

For the most part, if you are building new functionality consider using LWCs to benefit from the increased native operation in the browser and performance. Just starting? LWCs are the future.

Once suspended, shivamkapasia0 will not be able to comment or publish posts until their suspension is removed.

Once unsuspended, shivamkapasia0 will be able to comment and publish posts again.

Once unpublished, all posts by shivamkapasia0 will become hidden and only accessible to themselves.

If shivamkapasia0 is not suspended, they can still re-publish their posts from their dashboard.

Once unpublished, this post will become invisible to the public and only accessible to shivamkapasia0.

Thanks for keeping DEV Community 👩‍💻👨‍💻 safe. Here is what you can do to flag shivamkapasia0:

Unflagging shivamkapasia0 will restore default visibility to their posts.