Hello Guyz today i am going to show you how to setup a MERN App in VScode.
I have Learnt the basics of MERN Stack few days ago and wanted to share what i learnt and feel free to correct me or give suggestions if you find me doing something wrong in the code.

Then install the node js on your system

After installing , Open command prompt or VScode terminal and run the commands

It will show you the node js version you are using and also ensures you that it installed successfully.

Setting up the Folder Structure

Then create your project folder , In my Case i have named it REDUX Because i was using redux in my project.

Then open VScode and in your terminal , change the directory to your Project folder using "cd Project_Folder_Name"

It will create a package.json file for you.

Then use this command 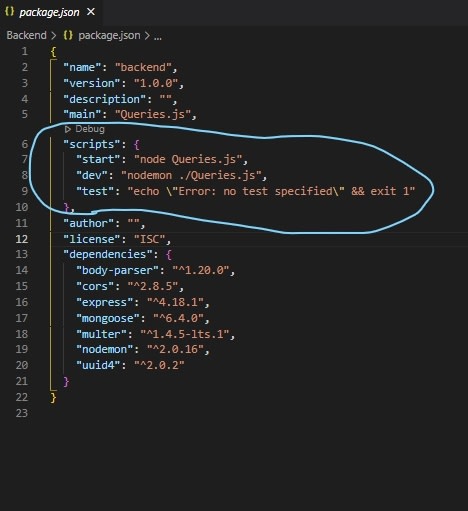 Thats it for this post, i will continue this series in the next blog where i will teach you how to create the mongo db connection and use it in the express App.

THANK YOU FOR READING THIS POST AND IF YOU FIND ANY MISTAKE OR WANTS TO GIVE ANY SUGGESTION , PLEASE MENTION IT IN THE COMMENT SECTION.
^^You can help me by some donation at the link below Thank you👇👇 ^^
☕ --> https://www.buymeacoffee.com/waaduheck <--

Once suspended, shubhamtiwari909 will not be able to comment or publish posts until their suspension is removed.

Once unsuspended, shubhamtiwari909 will be able to comment and publish posts again.

Once unpublished, all posts by shubhamtiwari909 will become hidden and only accessible to themselves.

If shubhamtiwari909 is not suspended, they can still re-publish their posts from their dashboard.

Once unpublished, this post will become invisible to the public and only accessible to Mysterio.

Thanks for keeping DEV Community safe. Here is what you can do to flag shubhamtiwari909:

Unflagging shubhamtiwari909 will restore default visibility to their posts.