In our previous post, we discussed the benefits of using certificates over keys for SSH. In this episode we wanted to highlight how switching to certificates improves the lives of developers, operators, and security teams.

With public key authentication, when you SSH to a remote host for the first time, you'll be presented with a security warning like this:

You've probably seen this before. If you're like most people, you've been trained to ignore it by just typing "yes". That's a problem because this is a legitimate security threat. It's also a pretty horrendous user experience. I'd wager the vast majority of SSH users don't actually understand this warning. 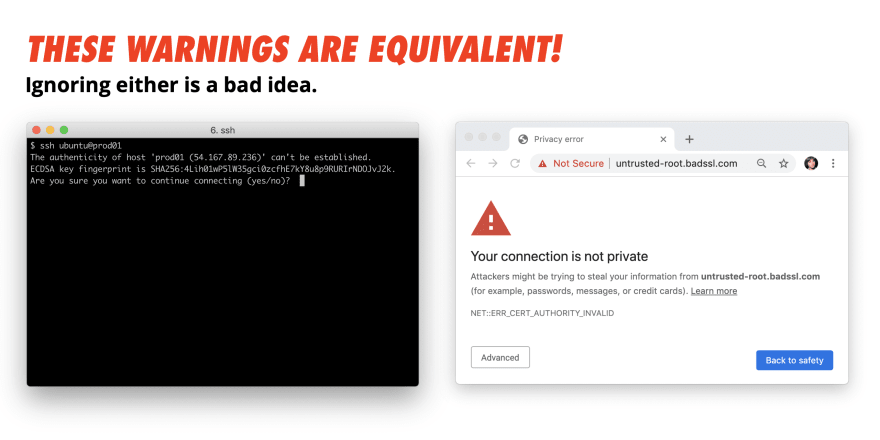 What you're supposed to do is verify the key fingerprint out-of-band by asking an administrator or consulting a database or something. But no one does that. When you type "yes" the connection proceeds without authentication and the public key is permanently added to ~/.ssh/known_hosts. This is the trust on first use (TOFU) anti-pattern.

Since certificate authentication uses certificates to communicate public key bindings, clients are always able to authenticate, even if it's the first time connecting to a host. TOFU warnings go away.

Eliminating key approval and distribution has immediate operational benefits. You're no longer wasting ops cycles on mundane key management tasks, and you eliminate any ongoing costs associated with monitoring and maintaining homegrown machinery for adding, removing, synchronizing, and auditing static public key files across your fleet.

The ability to issue SSH user certificates via a variety of authentication mechanisms also facilitates operational automation. If a cron job or script needs SSH access it can obtain an ephemeral SSH certificate automatically, when it's needed, instead of being pre-provisioned with a long-lived, static private key.

SSH public key authentication introduces some weird operational constraints around host names that certificate authentication eliminates. As we've seen, when an SSH client connects to a host for the first time it displays a TOFU warning to the user. When the user types "yes" the host's public key is added locally to ~/.ssh/known_hosts. This binding between the host name and a specific public key is permanent. If the host presents a different public key later, the user gets an even scarier host key verification failure error message that looks like this:

This makes it operationally challenging to reuse host names. If prod01.example.com has a hardware failure, and it's replaced with a new host using the same name, host key verification failures will ensue. This usually results in a bunch engineers contacting secops to tell them they're being hacked.

Ignoring host key verification failures has the exact same attack surface area as not knowing the key at all. Curiously, OpenSSH chooses to soft-fail with an easily bypassed prompt when the key isn't known (TOFU), but hard-fails with a much scarier and harder to bypass error when there's a mismatch.

In any case, certificates fix all of this since a current name-to-public-key binding is communicated when a connection is established. Changing the host's public key is fine, as long as the host also gets a new certificate. You can safely reuse host names and even run multiple hosts with the same name. You'll never see a host key verification failure again. Beyond name reuse, we'll soon see that eliminating host key verification failures is one of the many ways certificate authentication facilitates good security hygiene.

While the SSH protocol itself is secure, public key authentication encourages a bunch of bad security practices and makes good security hygiene hard to achieve.

Certificates, on the other hand, expire. In an incident — a mistake, theft, misuse, or key exfiltration of any form — compromised SSH credentials will expire automatically, without intervention, even if the incident goes unnoticed or unreported. SSH certificates are fail-secure. Access expires naturally if no action is taken to extend it. And when SSH users and hosts check in periodically with your CA to renew their credentials, a complete audit record is produced as a byproduct.

Public key authentication also makes rekeying difficult for users. Key approval and distribution is annoying enough that users are reluctant to rekey, even if you've built tools to make it possible. Worse, frustrated users copy private keys and reuse them across devices, often for many years. Key reuse is a serious security sin. Private keys are never supposed to be transferred across a network. But SSH public key authentication exposes users directly to sensitive private keys, then fails to give them usable tools for key management. It's a recipe for misuse and abuse.

An SSH CA, coupled with a simple command-line client for users, can streamline key generation and insulate users from a lot of unnecessary detail. Certificate authentication can't completely eliminate all security risks, but it does facilitate SSH workflows that are more intuitive, easier to use, and harder to misuse.

[EN] Cybersecurity: What are the best platforms?

Learn more about SSH certificates by visiting the Smallstep Website

Once suspended, smallstep will not be able to comment or publish posts until their suspension is removed.

Once unsuspended, smallstep will be able to comment and publish posts again.

Once unpublished, all posts by smallstep will become hidden and only accessible to themselves.

If smallstep is not suspended, they can still re-publish their posts from their dashboard.

Once unpublished, this post will become invisible to the public and only accessible to Mike Maxey.

Thanks for keeping DEV Community 👩‍💻👨‍💻 safe. Here is what you can do to flag smallstep:

Unflagging smallstep will restore default visibility to their posts.