Flask is a Python web framework which is used to develop web applications. In this post, we will try to deploy the web application on our machine using Docker container.

Containerising an application is packaging the application and its requirements, so that it can be used to deploy in any machine on a go. We will create a Docker image of the web-app using the Dockerfile and then we will run the docker container to access the web application in our browser.

We will use the basic flask application created by Mindy McAdams. Github repo url: https://github.com/macloo/basic-flask-app

Clone the repo in your machine https://github.com/macloo/basic-flask-app using the below command:

I hope that Docker is already installed in your system, but if it is not installed then follow the steps given in Install Docker Engine

Now, everything is setup. We will start writing Dockerfile for the flask application.

We will now create a Dockerfile for the flask app which will be used to create the image of the app.

1) Clone the Github repo if not done.
2) Change the directory to basic-flask-app/ and create a file called Dockerfile

3) Use your favorite editor, to edit the Dockerfile and paste the following:

Breaking up the Dockerfile

Let's see each line of the Dockerfile

ARG are also known as build-time variables i.e. they can be set during the image build with --build-arg and you can’t access them anymore once the image is built. Here, we take a variable APP_IMAGE to give the base image name. Default value: python:3.6.1-alpine

Here, we are setting the alias name builder for the base image. In this image, we will only install the dependencies packages.

RUN is used to run a specific command and it creates a writable container layer. Here, we are running a command to create a directory called install. Thus, the name builder :P

COPY as the name suggest is used to copy the file from your Docker client's current directory. Here, we are copying the file requirements.txt

Here, we are using pip to install all the packages required to build the flask app. The packages are mentioned in the requirements.txt file.

Again, now after the installation of the required packages, we are now taking the same image (used above) as the base image.

To run a flask app, either we need to use flask command or python's -m switch with flask. But, before that we need to export a variable called FLASK_APP to specify how to load the application.

Note: This will start a development web server. But, for production deployment, you need to use production-ready web server like uWSGI

We are setting project directory as the working directory.

We are copying all the installed binary packages installed in the later base image to the path /usr/local in the current base image.

ENTRYPOINT is to identify which executable should be run when a container is started from your image. Here, we will run the flask app using python's -m and --host=0.0.0.0 will make the server publicly accessible.

The above command will build the image with tag basic-flask:latest. We have given the --build-arg option to mention the base image name to be used to iniate the image build.

2) Once the command runs successfully, run the below command:

This command will list all the docker images and you can also see the image basic-flask:latest in the list.

3) Now, run the below command to start the container from the image build in step 2.

This command will run the application at port 5000. The various options used are:

4) Check the status of the docker container using the command:

You can see that your container is in running mode with several other details.

Try to access the flask application from your browser. Visit the URL http://localhost:5000/ and verify the output: 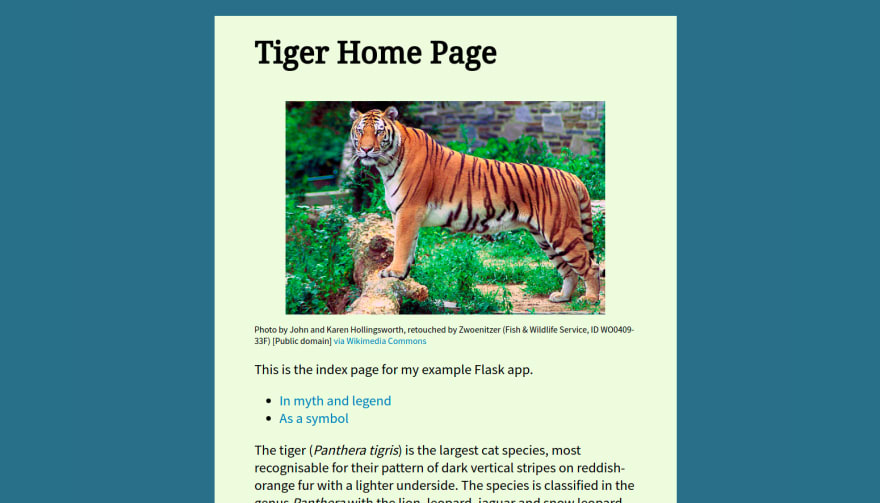 Try the above example out and please let me know in the comments if you have any doubts or have a better form of the Dockerfile to build the flask app.

Sourav Atta
I am currently working as a DevOps engineer. As a DevOps engineer, I always try to be very tool agnostic. I am very much into learning old-school IT concepts.
Reasons NOT to...
#devrel #leadership #discuss
How did I shrink my NextJS Docker image by 90%?
#nextjs #javascript #docker #performance
GitHub verdinho: Ter ou não ter?
#braziliandevs #github #opensource #discuss

Once suspended, souravatta will not be able to comment or publish posts until their suspension is removed.

Once unsuspended, souravatta will be able to comment and publish posts again.

Once unpublished, all posts by souravatta will become hidden and only accessible to themselves.

If souravatta is not suspended, they can still re-publish their posts from their dashboard.

Once unpublished, this post will become invisible to the public and only accessible to Sourav Atta.

Thanks for keeping DEV Community 👩‍💻👨‍💻 safe. Here is what you can do to flag souravatta:

Unflagging souravatta will restore default visibility to their posts.