The original inspiration to write this blog started with an earlier post on dev.to written by James Hood. In that blog, James mentioned that he was using "text files" for to-do list which I thought of 'old school' at that time. I also added a comment on how I use 'evernote' for achieving the similar purpose. Couple of weeks ago, I was given a bit of advice given by one of my senior colleague(who I respect a lot) at my work.

Don't be too dependent on apps as you may never know where you will end up working in the future.

My senior colleage's advice made me to read James Hood's blog again. As I read through the blog and the comments, I started to re-think about my work flow and also consciously monitor the tools that I use and the way I use them on a daily basis. I use Macbook Pro(late 2013) at my work. As an Android developer, My primary development tools are,

Besides that these are some apps I have installed and used on a daily basis,

Besides my macbook, I also remotely ssh into our build and release server machines running ubuntu 14.04. I don't actively write code on those machines, however I do write scripts on occasions.

The idea is to reduce the dependencies of apps by taking a minimalistic approach and solve the problem with simple solution.

I took James Hood's idea of using text files for to-do list, and his comment about using private 'git' repo to back up notes.

So basically, I made two simple changes in my work flow.

Earlier I had created a repo for my blogs and the directory structure is as below, 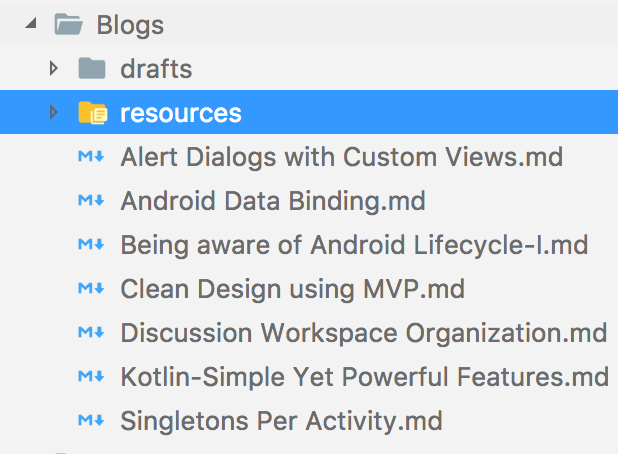 I expanded on the idea and created a directory structure as below, 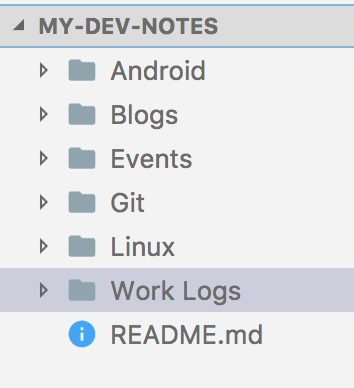 Now all my notes, blogs and work logs are in one single place in my private repository. All I need is a machine with git installed and internet to access them.

The reason I chose to use markdown instead of plain text files is that markdown makes it easier to review the notes in the future. As you read through the blog you can see what do I mean by that.

Migrating all my notes from Evernote to Git repository at once is a painful task. So I am following this approach.

Under the Work Log directory, I created a master to-do list markdown file, 00 Todo List of Tasks.md (Name begins with 00 so that it would be on top in the directory stucture when sorting) and also created a sub-directory resources to add the additional resource files like screenshots, log files etc.,

As the name implies the idea of master to-do list to serve as common reference point to add/remove/review the tasks and also helps to jot down any new ideas that popped up as I work.

I started creating markdown files (in similar style as writing blogs in some sites) in the format, 'date_day.md' So after two weeks of my work, it looks like as below. 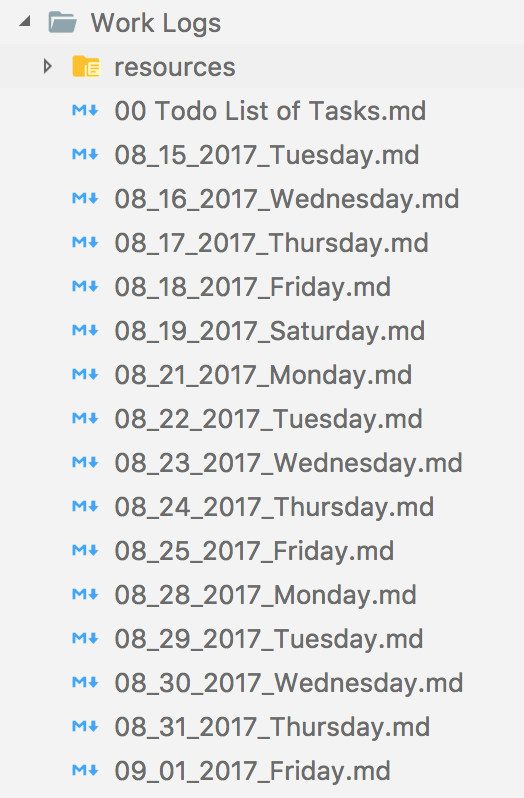 I usually plan my day ahead either the night before or early in the morning. The tasks may come from the master to-do list or based on the meetings/emails/JIRA tasks assigned. Each Markdown file follows the below format when created.

Once I add the plan for the day, I commit my changes.

As I start the day at work, I prioritize the tasks based on the priority and start working from top priority task. Any new tasks that come up will be added to bottom of the list. At any time only one task(Current taks) will be marked as bold (using markdown syntax) in order to keep my focus.

I follow a strict rule of not jumping to the another task unless it's top priority task or time sensitive. Otherwise I don't start on another task until I complete or reach a checkpoint on the current task. Before jumping to the next task, I update the task with the completion status and if there's anything pending.

And I make a commit as below.

At the end of the day, I review the tasks completed and tasks that are pending. The final work log can have only the tasks that are completed on that day, which makes easier to review the completed tasks in the future. Based on the progress and priority, all the unfinished tasks goes to either the next day or to the master to-do list. For example, the Task C may go to the next day and Task E may go to the master to-do list.

Benefits of the approach

The most obvious benefit that I got from this approach was that I no longer needed several apps. I can access my notes from anywhere as long as I have internet connection.

On reviewing my work log, it's plain to see what's completed on that day and what actions that I took. 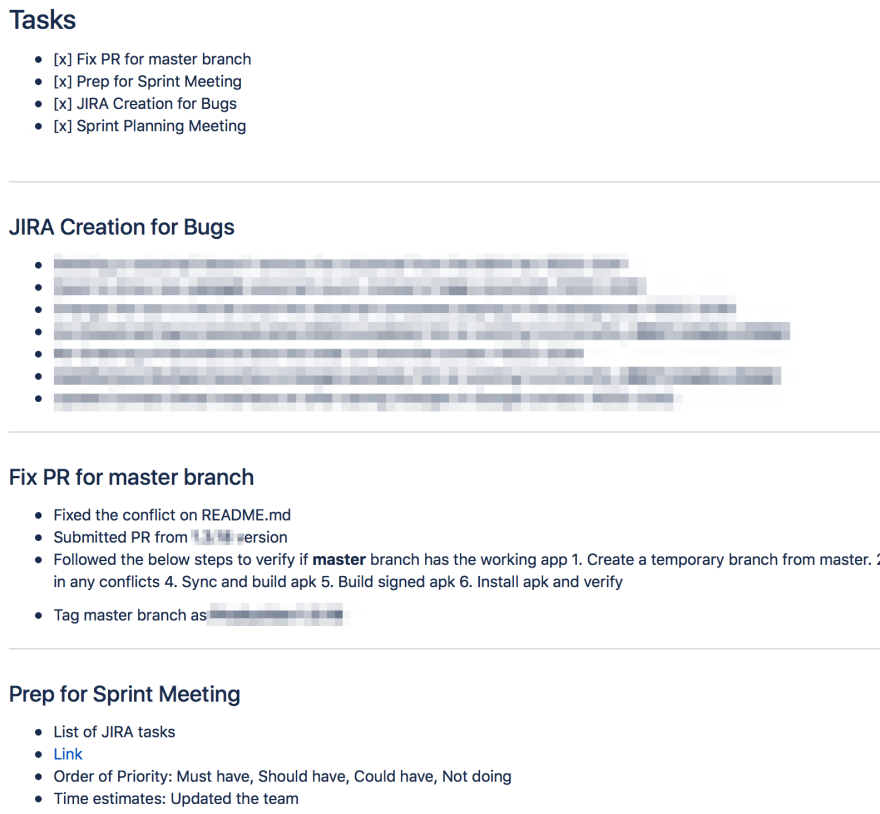 Also this opportunity helped me to master the git commands by using them on a daily basis. 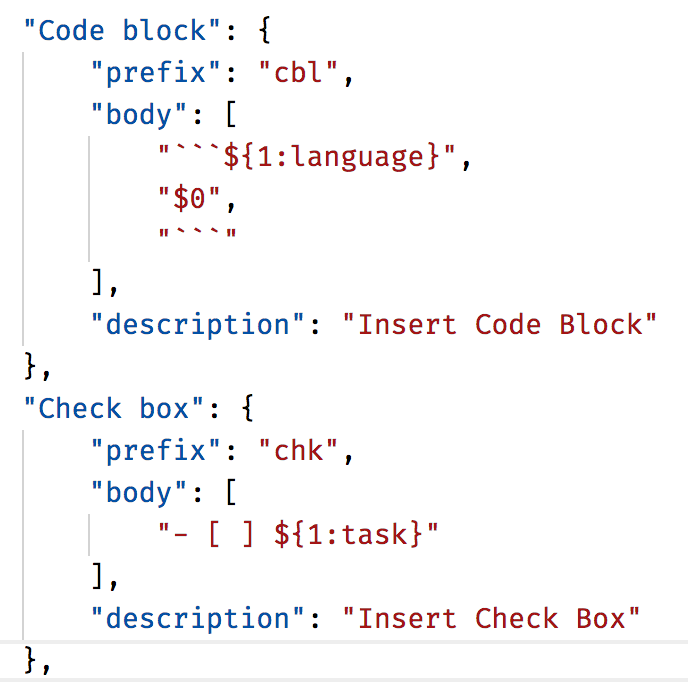 Once suspended, subbramanil will not be able to comment or publish posts until their suspension is removed.

Once unsuspended, subbramanil will be able to comment and publish posts again.

Once unpublished, all posts by subbramanil will become hidden and only accessible to themselves.

If subbramanil is not suspended, they can still re-publish their posts from their dashboard.

Once unpublished, this post will become invisible to the public and only accessible to Subbu Lakshmanan.

Thanks for keeping DEV Community 👩‍💻👨‍💻 safe. Here is what you can do to flag subbramanil:

Unflagging subbramanil will restore default visibility to their posts.