In this oxymoronically titled article, we study laziness as a core aspect of functional programming in Python. I'm not talking about hammock driven development or some such leisurely titled paradigm, but lazy evaluation. We'll see how lazy evaluation can make you more productive by improving re-usability and composeability through refactoring a small example, introducing lazyness along the way.

Simply put, lazy evaluation means that expressions are not evaluated until their results are needed. Contrast this with eager evaluation, which is the norm in imperative programming. Under eager evaluation, functions immediately compute their results (and perform their side-effects) when they are called. As an example, consider this python function called get_json which calls a web api as a side-effect and parses the response as json:

Now, imagine that we want to implement a retry strategy with a simple back-off mechanism. We could take the eager approach and adapt get_json:

That works, but the solution has a huge shortcoming: We can't re-use the retry strategy for other types of HTTP requests. Or alternatively, but equivalently: get_json violates the single responsibility principle because it now has three responsibilities:

This makes it hard to re-use. Let's fix it by being lazy. To keep things general, we'll define a type-alias that models lazy values that are produced with or without side-effects. Let's call this alias Effect since it allows us to treat side-effects as first-class values that can be manipulated by our program, thereby taking the "side" out of "side-effect".

We'll use this alias to implement the function retry which can take any Effect and retry it with the same backoff mechanism from before:

So far so good. Now lets implement a function that executes lazy values in parallel called run_async. Obviously, we want to be able to use run_async with get_json and retry:

(This won't actually work since we have lambdas in the mix and multipocessing doesn't like that without third party libraries, but bear with me.)

That's all fine, but you might object that we've made a mess of our code. I agree. In particular I think that our "glue" functions get_json_with_retry and get_json_async_with_retry are embarrasingly clumsy. What's missing, in my view, is a general solution for glueing lazy values together that would make these specialized glue functions redundant.

To achieve that, we'll use the following dogma:

So let's maximize the re-usability of our solution by turning our laziness up to The Dude levels of lethargy. 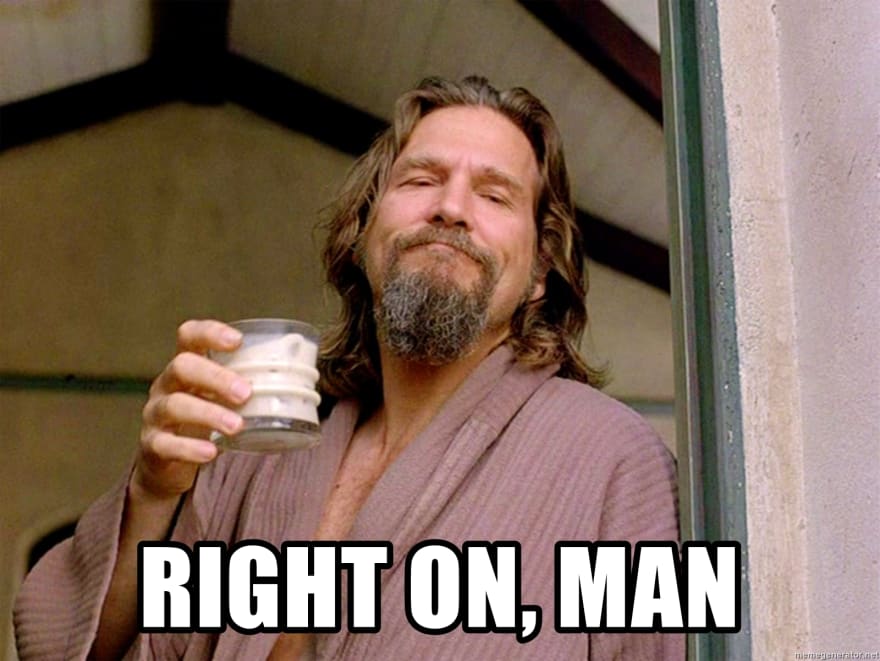 Lets start by refactoring get_json to return an Effect.

Pretty straight-forward. Now let's do the same for retry and run_async

With this in hand we can compose any variation of our functions to our hearts desire with minimal effort:

First, realise that we could further re-use both get_json_with_retry and get_json_async_with_retry with any function that operates on Effect instances. Also, notice that lazyness (or higher-order functions) is what enables us to program with this degree of re-use, and what allows compositionality on this high level of abstraction (ultimately on the level of entire programs).

As an added bonus, functional programs are often more predictable and easy to reason about. Also, with few modifications, the pattern we have developed here can be extended to enable completely type-safe dependency injection and error handling. Moreover, static type checking becomes more useful because all functions must return values, even if they merely produce side-effects (in which case they'll return Effect[None]).

In our effort to refactor our example, we have halfway re-invented a common functional pattern: The enigmatic IO type (which we call Effect in our example, and which I hope you don't find mysterious at all at this point). There is much confusion about what IO is and does, especially outside the functional programming clubs of Haskell and Scala programmers. As a consequence you'll sometimes hear IO explained as:

While this explanation is not strictly speaking incorrect, it's wildly inadequate because it doesn't mention anything about lazyness which is a core feature of IO. Based on this naive explanation, you might be tempted to try something like:

This IO implementation simply tags return values of functions that perform IO, making it clear to the caller that side-effects are involved. Whether this is useful or not is a matter of some controversy, but it doesn't bring any of the functional programming benefits that we have discussed in this article because this IO version is eager.

In summary: lazyness (or higher-order functions) enables radical re-use and compositionality, both of which makes you more productive. To get started with functional programming in Python, checkout the pfun documentation, or the github repository.

I challenged myself to read every day, and it changed my life 📚

Once suspended, suned will not be able to comment or publish posts until their suspension is removed.

Once unsuspended, suned will be able to comment and publish posts again.

Once unpublished, all posts by suned will become hidden and only accessible to themselves.

If suned is not suspended, they can still re-publish their posts from their dashboard.

Once unpublished, this post will become invisible to the public and only accessible to Sune Debel.

Thanks for keeping DEV Community 👩‍💻👨‍💻 safe. Here is what you can do to flag suned:

Unflagging suned will restore default visibility to their posts.