I was procrastinating setting up my new mac for too much time.

Today I was configuring our k8s environment and I decided to invest some time to put the right autocomplete plugins.

First, we have kube config files generated per team and since as architect I work across several different teams, I was looking to the right way to include different config files on k8s in a very standard way. The standard way would be a single .kube/config file but I went to adding each file to my $KUBECONFIG env variable:

Then I setup Krew as per k8s recommendation:

So installing krew was pretty straight forward (just have to add to $PATH the installation path), and I was ready to use the plugins I was most interested in. As we are having more than 200 namespaces (services) in several contexts (environments) it was a natural follow up to install kubectx and kubens

And... are we done? Not yet. We lack autocomplete in the plugins.

Both come with autocomplete on the standalone version (that is kubectx and kubens) but I prefer to stick to kubectl or as I have aliased with bash-it, kc.

There is a request on k8s to add autocomplete support to plugins here but since the support needs to be optional and universal there's still no agreement on how to implement it.

So let's dive a little bit into how to add that support ourselves.

bash/zsh differences: The basic procedure applies both zsh and bash but I am going to use bash as an example.

Getting kubernetes completion on the shell

As an starting point, kubectl already includes code completion for bash and zsh. We will be using that as a reference for our code.

We just generate k8s completion for our shell and save in a file on our dotfiles or equivalent (some shells require tools like bash-completion; I am using bash-it as I said before)

or if you are using oh-my-zsh

This is the basic step but we have not configured anything yet.

Then we need to include the generated file in our profile. If using bash-it it'll be included automagically with the above naming convention. If you're following the example on zsh above just add the following line to your .zshrc customizations:

What we want at this point is:

The fastest and easier way to do it is just edit our newly generated file above. With your favorite editor, find the function _kubectl_root_command() and add our new commands at the bottom of the command list:

If we run now kubectl with autocomplete, we get the right completions: 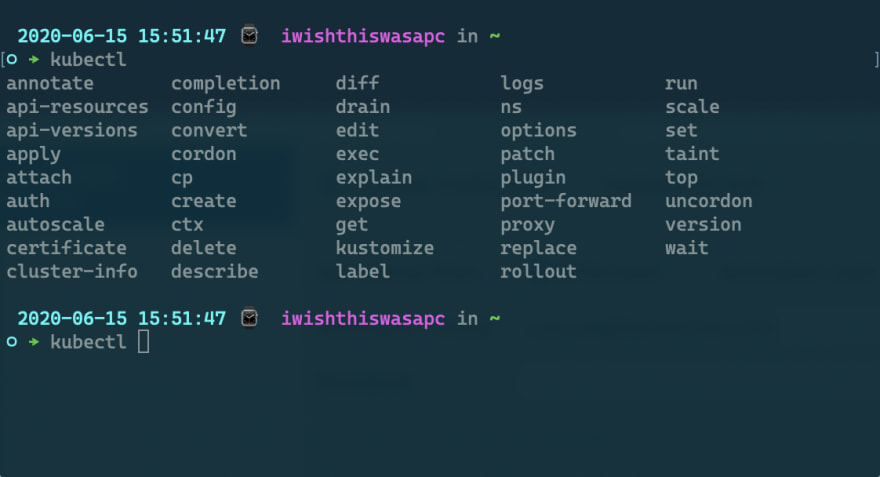 And they also behave as we expect when we've partial words: 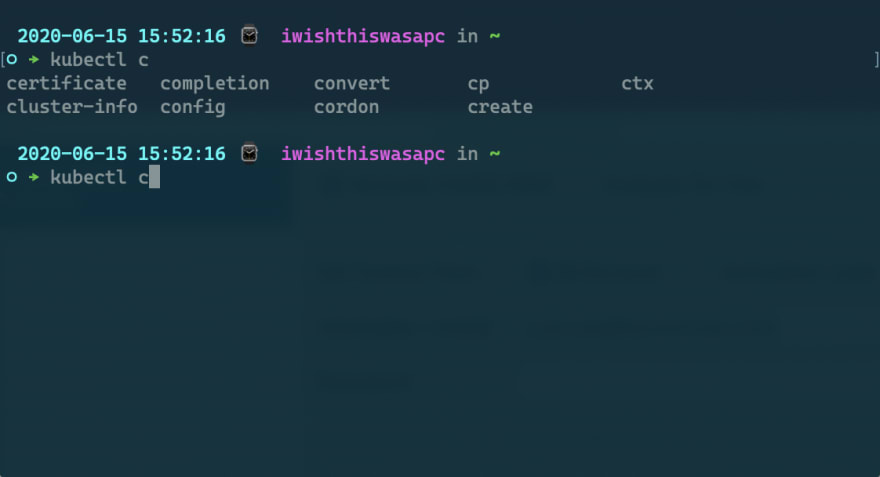 Great! We can cross the first item in our todo-list; now for the second one.

We observe that the file generated by k8s contains a bunch of helper functions (those that start with __) and some command functions (that start with _) There's also a convention on the variables they
use (like last_command or the commands list we hacked above). What we are going to do is to add our own handler to the kubectl ctx and ns commands and then we will instruct the autocomplete code to do it's magic. To the magic part we will be using a function that k8s already had there but can help us to start hacking: __kubectl_custom_func()

Define your own handler

This is straight forward. Our command is kubectl ctx so we define a function called _kubectl_ctx (the magic parsing on the script and autocomplete will do the rest). Inside our function, we clear any variable that might have been set but could break some k8s commands:

Those lists and flags can handle the behavior of this command but we're relying now on the custom function mentioned above.

To add the namespace completion, we just add one additional case to the switch above, right before the default:

Don't forget to add the function to handle the ns command!:

This was really easy because we already had the __kubectl_get_resource_namespace (and get contexts) functions there, but we could have written our own implementation.

If you want to dive deep into this subject, the generated k8s autocompletion script is full of examples. The first iteration can be, for example, support some kubectl flags, like the rest of the commands; for example, copying the available list of flags from one of them (or the root command).

Juan Ara
Hi there! I've been a software engineer, techlead and lead architect. Now I'm Senior Engineering Manager working at Klarna. Loving gaming and motorbikes. Writing software since I was 9. Since 1987 ;-)
10 of the coolest developer T-shirts from devshirt.club
#watercooler #codenewbie #career #writing
5 Life-Changing Lessons I Learned From Being Laid Off That Will Put You Ahead Of 97% Of People
#beginners #productivity #motivation #codenewbie
What was your win this week?
#discuss #weeklyretro

Once suspended, tarodbofh will not be able to comment or publish posts until their suspension is removed.

Once unsuspended, tarodbofh will be able to comment and publish posts again.

Once unpublished, all posts by tarodbofh will become hidden and only accessible to themselves.

If tarodbofh is not suspended, they can still re-publish their posts from their dashboard.

Once unpublished, this post will become invisible to the public and only accessible to Juan Ara.

Thanks for keeping DEV Community 👩‍💻👨‍💻 safe. Here is what you can do to flag tarodbofh:

Unflagging tarodbofh will restore default visibility to their posts.