Some years ago a friend of mine was in college and started dating a girl who would ultimately become his wife. The first time he met her father was when she invited him to go boating on a nearby lake.

As soon as they got out on the lake the others in the group began to take turns water skiing behind the boat, while her father piloted. He watched as each person was dragged out of the water and rode behind the boat, graceful and impressive. After a few people had their turns, her father turned to my friend and asked if he wanted to ski. He had never before in his life been water skiing, but he knew he needed to make a good impression, so of course, he said yes.

The people he was with helped him get situated in the water and gave him directions on what to do. As he sat there in the water, waiting for her father to start moving the boat and pulling on the rope he clutched in his hands, he said one of his most fervent prayers ever. Asking God for just this one thing: let him do well. Let him get up out of the water and be like the other skiers, graceful and smooth. He wanted so much to impress this girl and her father. In his plea, he offered everything he could think of for just this one little request. At this moment in his young life, it was perhaps the most significant thing that had ever happened and he believed with all his heart that it was possible. That a miracle could occur.

As her father began accelerating the boat, and the rope began to pull him forward, the inevitable happened. Heedless of his prayer, his desires, and his desperate physical effort, the rope pulled him over, and ultimately snapped from his hands. He lay there in the water, a jumble of arms, legs, and defeat.

They gave him several more attempts but each resulted in the same humiliating failure as the first.

Later that night he lay in bed, frustrated that his request had not been granted. Angry even. Why was he not given this gift he so desperately needed? He couldn't understand it. 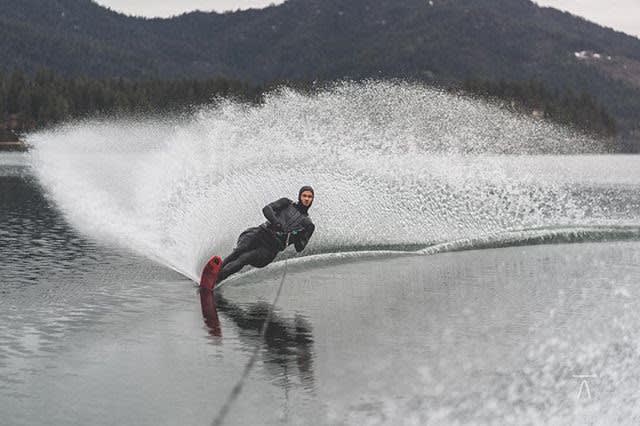 Then less than a week later, something unexpected happened: a cousin invited him to spend the weekend at the lake with his family. He readily accepted and when they arrived, the discussion of water skiing with the boat came up. My friend told his cousin that he wanted to learn to ski. His cousin readily agreed to spend all weekend teaching him. But my friend said he wanted to learn to slalom, using only one ski. Somewhat more difficult than regular water skiing.

All day Friday and Saturday they worked. The next weekend they returned to the lake and spent all day practicing and learning.

The next week, this girl he was dating invited him out again to go boating with her family. Once upon the lake again he was again offered the chance to try out water skiing, this time perhaps more out of pity than anything else. He accepted, but insisted that he be set up with a single slalom ski. Her father eyed him in the way that only the most ridiculous requests earn, but ultimately acquiesced.

When the boat began to move this time, he came cleanly up out of the water, and gracefully skated across the surface for several minutes.

Your prayers, your requests, your pleas to your higher power, regardless of the form that takes, will be answered, but they will inevitably be answered with opportunities to grow. You will receive gifts and blessings that are disguised as work and responsibility and burden. It is only your limited, imperfect, human viewpoint that prevents you from seeing them for what they truly are.

What have you been asking the universe for? To improve your marriage? Are you overwhelmed at work? Or Unappreciated? Are you struggling with your self-confidence? Or your weight? Are you lonely?

**"Every problem is an opportunity in disguise."

Perhaps the universe has answered in a way you don't recognize.

Beginner JavaScript - 1 - The Language and How Web Works ?

7 Udemy courses worth your time and money