Semantic versioning, is the way to version packages in JS ecosystem. I always thought I understood semver, but that illusion disappeared once I started maintaining libraries myself. Semver has tricky edge cases where it’s unclear what the new version number should be: 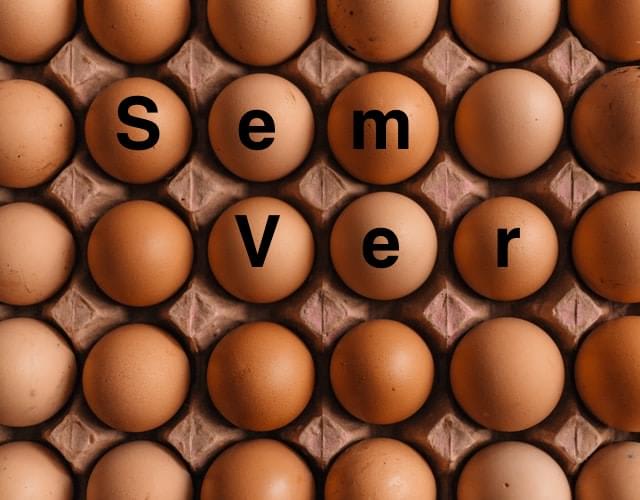 A quick intro to SemVer

A Semanic Version, or semver, has a format of major.minor.patch-(maybe) prerelease — three numbers and some gibberish after a dash that we’ll ignore for today. As the semver spec explains it:

The trick is, SemVer talks about the public API of your package, and the concept of API is a bit fuzzy, so it’s not really as strict as you’d expect.

In product front-end development, life is simple. Your product has no public API, no other code depends on it, so you don’t really care. Three-number semver format is still useful, since many node tools support it, but you can do whatever you like with the numbers. Using a single number, incrementing it on every build, is just fine: 0.0.123 -> 0.0.124, why not. Classic git flow works well with two numbers: minor for releases, patch for hotfixes: 1.1.0 -> 1.2.0, then 1.2.1 if you fix a bug. You can also increment the major version to congratulate yourself on a particularly big feature: 1.2.0 -> 2.0.0 = well done, Vladimir. Really, anything works.

Once your code becomes a library (and I expect this to happen more often as micro-frontends grow), you need a way to communicate the API compatibility of your new releases to consumers. You need real semver, and you have two conflicting goals. First, you must follow the semantic part of semver to tell the consumers if they can safely update. This also helps package managers decide if a particular version can be reused between several consumers, or must be duplicated. But you also want to increment the version as slowly as possible — frequent breaking changes and even large minor increments are scary for your consumers, and may lead to duplicate versions of your library in the final app.

Sometimes you haven’t really done anything visible from the outside, but still want to release. Refactorings, performance improvements, documentation changes fall in this category. In all these cases, I usually go with a patch update, because:

On the other hand, spec p. 7 allows you to bump minor for “substantial new functionality or improvements are introduced within the private code” but come figure what substantial means. Anyways, see an official discussion.

SemVer is useless without a changelog: have a breaking change? Amazing, but what is it and what should your users do about it? Good places to maintain the changelog are GitHub releases,, CHANGELOG.md, confluence / dropbox paper / whatever for internal projects, a dedicated page in the docs, or even a pinned message in the support chat. Just make sure all your users know where to look for it.

This one is clear, but keep an eye out: if you release changes in batches, the new version must be the largest of versions from each change. Some examples of a release after 1.2.3:

If you have a patch release planned, but add a feature to it, don’t forget to change it to a minor release, etc.

Say you release a buggy 1.2.3 — a dropdown component calls onClose on open. Strictly speaking, if you now stop calling onClose on open, you must release 2.0.0, because it’s a breaking change — your fix breaks apps that rely on onClose firing on open. On the other hand, a major release is likely to confuse everyone and scare them away from updating, so you should prefer 1.2.4. There’s no hard rule for situations like this, use your best judgement to decide if you can get away releasing the patch. Some things to consider:

If you do release the breaking bufix as a patch, consider deprecating the broken version via npm, mentioning it in the changelog and notifying your users in the support chat / twitter.

Bug fix in semver terms is loosely related to normal person’s idea of bug vs feature. Sometimes you can’t fix a bug in the current API. In this case, fixing it is a feature, so you must release a minor.

For example, your button component looks bad when you pass multi-line content. If you edit some CSS or adjust the display based on offsetHeight, it’s a patch. If you add a special multiline option that users should pass for multiline content, you’ve just implemented a feature — support multi-line content in buttons, so a minor.

The feature / enhancement distinction happens to be much more practical in SemVer. Say, you improve the positioning of a dropdown so that it detects scroll overflow and automatically chooses the up / down direction. Is it a bug fix, because the old behavior was incorrect, or a feature, because now your library does something it didn’t do before?

I usually go for a feature (minor increment) in these cases, because a patch seems confusing, and a major is scary, but you can choose a different path. Some PRs to semver spec (#415 or #588) allow you to make such changes in a patch, since it does not affect the API.

Obviously, if your library has a TypeScript / Flow / whatever interface, any change to the interface type should be reflected in the version number. A type-only change, like exporting an interface that was internal, is a feature that deserves a minor bump.

What should the new version of your package be if you update a package B you depend on? Summary of the official discussion:

I often see libraries update deps in a minor. I’d rather not do that, but I’m not completely against it, as long as the update path for package B is safe. Updating peer major in a minor release is pure evil, though.

Most libraries increase the major version when dropping runtime support. If your library runs in IE11, but then you add an unpolyfilled .closest, it’s a breaking change because it may break some apps that were supposed to run in IE11. Increasing runtime compatibility (like adding a polyfill) is a no-op. The key here is the public compatibility guarantees you give — if you say “runs in IE11” in your docs, it’s your API now, and dropping it is breaking. If you never promised IE11, you can argue that it just happens to work as an implementation detail and ignore it in your versioning.

Here are my 10 semver lessons from 2 years of open-source work:

How to predict the future using Python 🐍?

🙌 How to get rid of vulnerabilities with just NPM 👀