I have a Paper object that contains 2 equals method.

What will be printed out for the following 6 equals method calls?

Let's get to the analysis. Feel free to correct me if I am wrong...

There are a total of 3 different possible outputs :

Let's draw a proper mental model of what is going on. 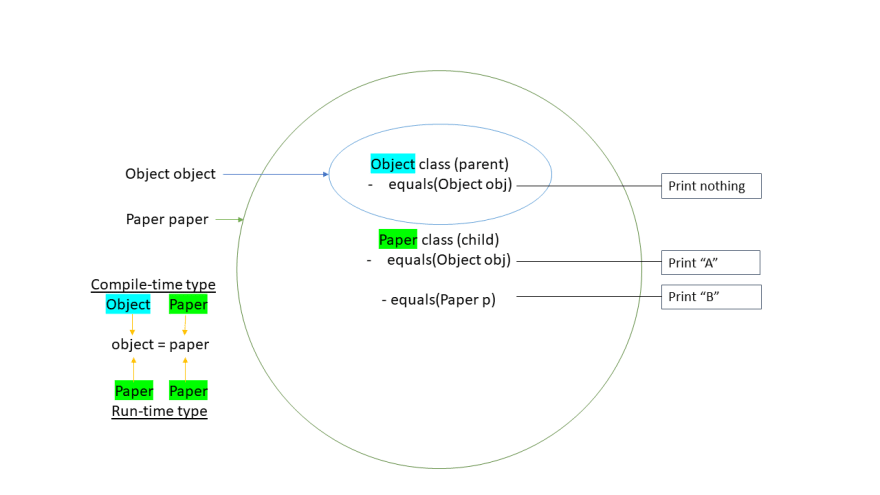 Explanation for the set-up

Explanation for the 1st to 3rd method calls

During compile-time, we look at the compile-time type. So in the above three cases, we have a variable named object that has compile-time type of Object. This fact tells us that the variable can execute any method as long as the method is included in the Object class.

During run-time, we know that certain objects might have different type as compared to compile-time, hence we check if any method has been overridden and change our decision made during compile-time, and run the overriding method instead. This is also known as dynamic binding.

From our mental model above, we can see that the Object class has only one equals method. So,

Explanation for the 4th to 6th method calls

With the knowledge from the first three method calls, it is much easier to understand the rest.

Understand the different results across run-time, due to inheritance and polymorphism, might be slightly confusing. However, this knowledge will allow us to better appreciate Objec-Oriented design later on. One example is that polymorphism and dynamic binding will make extension of code easier (minimize modification of client code when adding new a subclass).

Once suspended, tlylt will not be able to comment or publish posts until their suspension is removed.

Once unsuspended, tlylt will be able to comment and publish posts again.

Once unpublished, all posts by tlylt will become hidden and only accessible to themselves.

If tlylt is not suspended, they can still re-publish their posts from their dashboard.

Once unpublished, this post will become invisible to the public and only accessible to Liu YongLiang.

Thanks for keeping DEV Community safe. Here is what you can do to flag tlylt:

Unflagging tlylt will restore default visibility to their posts.