Okay, let's do this! Open up your favorite text editor or IDE. A classic .travis.yml file for Python would look like this:

For this example we will assume you are using python3 and below is your Dockerfile:

Next up let's build an image and run it!

The image is built using foobar as a tag in which myself, I’ll use next when running it:

Some explanations of the arguments below:

Now let's setup the Travis .yml file! As you'll notice we will be using services (as Docker is our service in this method). This file as usual should be listed as .travis.yml.

Now let's say this Travis file wants to push to Amazon ECR. Keep in mind that ECR has some limits on maximum amount of tags and images.

As you see it also expects some environmental variables which I’ll provide in .travis.yml. Below is an updated script:

In this scenario I pushed 2 tags, latest and versioned. AWS also has limits on this.

As you see it also expects some environmental variables which I’ll provide in .travis.yml. You'll see an updated script assuming above one was named docker_push.sh:

Now remember to encrypt your env vars for our AWS keys, there were three of them:

Once you make sure all the env vars open up your IDE or text editor (in my case it's vim) and reread over the Docker bash script I provided earlier and make sure it's correct (can also lint for help). Here's a screen cap of my vim environment for an example: 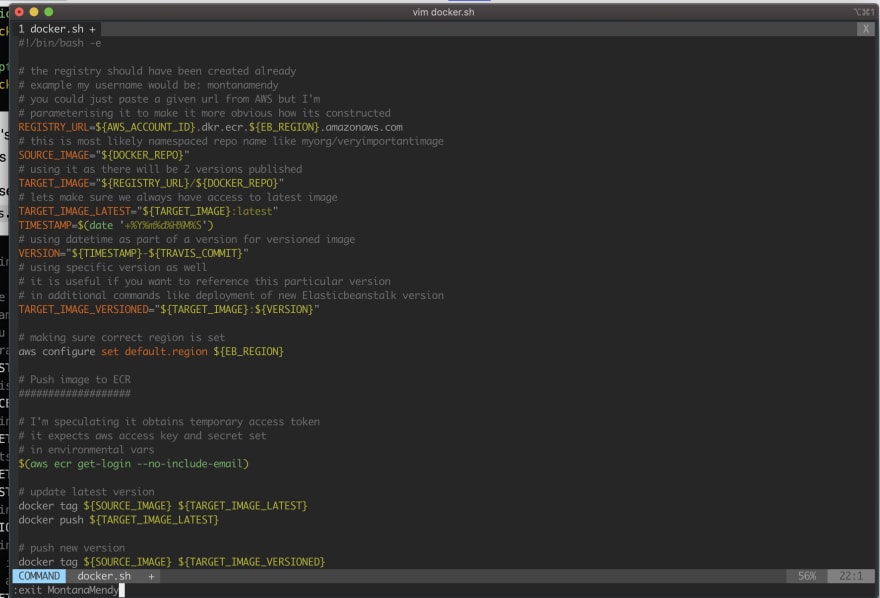 Since you have Travis installed, read this snippet of information. So we can run:

That's it, you're now in the Docker container world with Travis!