Apparently, the first Thursday in May is World Password Day. I'm not sure how I missed it as arbitrary holidays have been somewhat of a hot topic on my team of late. It's one way to pass the time in our collective quarantine.

But if we're being honest, every day should be World Password Day! Practicing password hygiene is a worthy endeavor indeed. This is especially true as more of our lives are being lived online during the COVID-19 crisis. Reusing passwords is an especially risky, though widely used practice that makes you susceptible to breaches. When's the last time you checked to see if you'd been Pwned? If your guard wasn't already up, there's no time like the present to start taking your passwords more seriously.

This post is for people who want to secure their personal identities. Companies should help keep their customers secure by offering 2FA and creating sensible password policies. I am especially passionate about strong password practices because it's one of the easiest ways to defend your digital identity.

So, what makes a good password? There are many factors to consider but, for the average individual, focusing on using a unique password of a certain length is a great place to start. Password managers are of course a useful tool to help solve this problem.

I presented the following idea for a poster topic at Pycon 2018 to explore creating a password management system - which I am by no means endorsing as there are plenty of good ones on the market - to generate strong passwords using a technique called Diceware and Twilio SMS to send and receive data.

Thanks to a mild Harry Potter obsession and a designer at my disposal, I explored the topic of passwords through a literary lens before digging into the science and math. I was surprised to find the extensive and important role that passwords played in the harrowing adventures of our favorite young wizards against certain evil forces.

I studied the general password practices displayed by each of the four Hogwarts houses throughout the duration of the series. I am particularly proud that my own house of Hufflepuff uses physical gesture rather than the incredulous same simple password used by Slytherin. 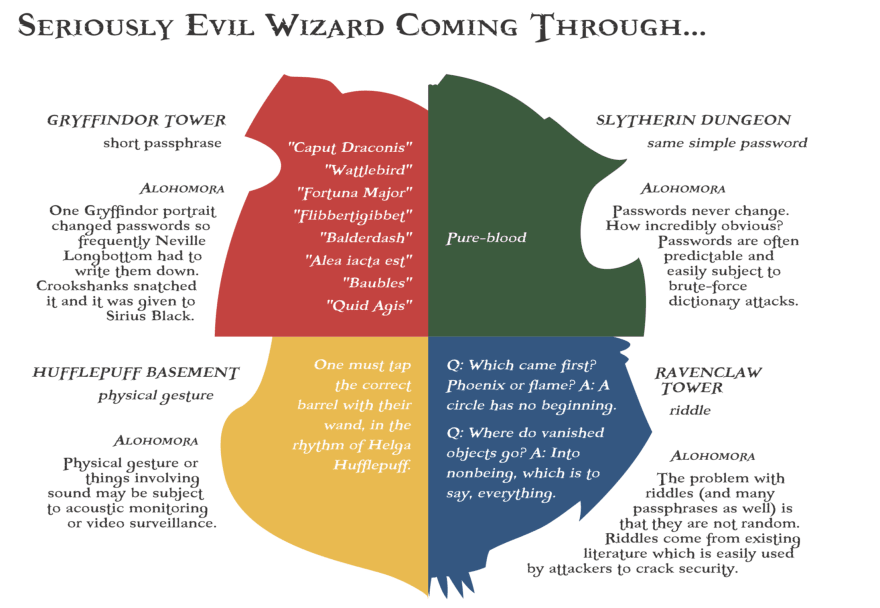 As it turns out, we "Muggles" are not as random as we think. The ways in which we've often been told to create passwords makes them kind of predictable and even harder to remember. All of those capital letters, numbers, and special characters are not actually making your passwords as strong as you think.

Take the following password for example. Was it diagonally? No, Diagon Alley. But substitute a one and zero. And there was a symbol...at the beginning or the end? Was it before or after the number? Admit that you've made similar substitutions to make your passwords more "secure". 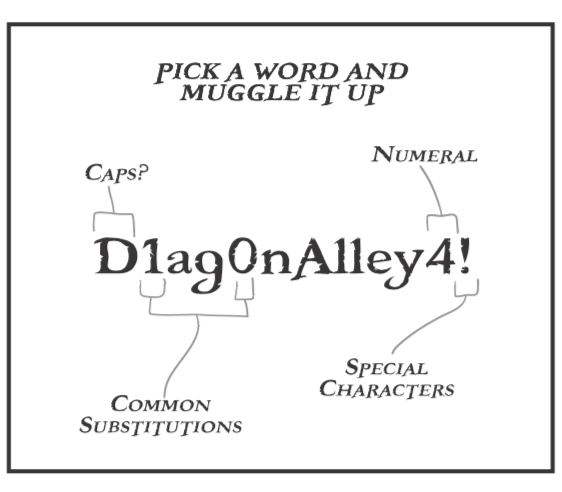 A method for picking passphrases that uses ordinary dice to select words at random from a special list called the Diceware Word List. Each word in the list is preceded by a five digit number. All the digits are between one and six, allowing you to use the outcomes of five dice rolls to select a word from the list.

There's a lot of discussion around what makes this effective and if you're interested, I suggest you dig into the research. But for our purposes, it is enough to know that dice are non-deterministic and considered random so they deliver a result that one could not have guessed. Entropy is a measure (in bits) of uncertainty or randomness within a system and this increases with every additional word we add to our passphrase with the Diceware method. There are of course systems that are built to hack even this and so this chart suggests an Ordinary Wizarding Level or O.W.L. score for passwords of varying lengths. Seven words, for example, has approximately 90 bits of entropy, and is considered to be "unbreakable with any known technology, but may be within the range of large organizations by around 2030." 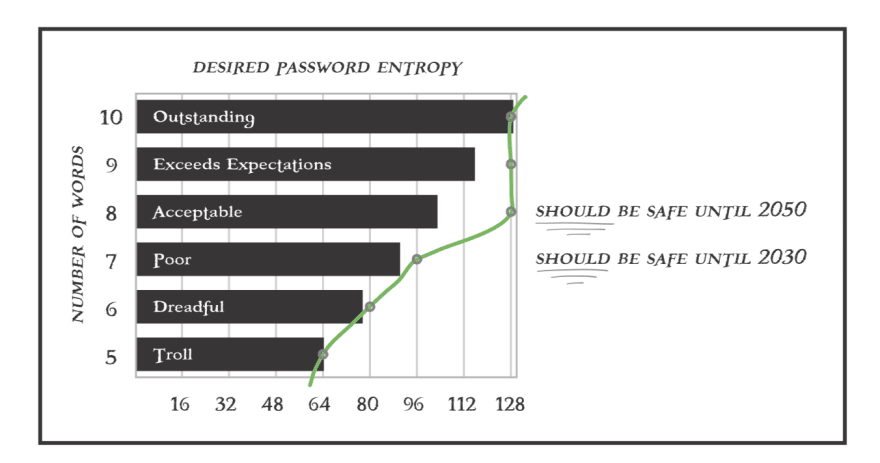 There's a popular meme in the security and programming community where the resulting passphrase is "correct horse battery staple", which, now because of its infamy, would be a terrible passphrase despite reasonable length given it's ubiquity. But the point is to emphasize how easily one can visualize a passphrase to remember it. I reimagined this within the context of The Boy Who Lived performing the Riddikulus charm against Boggarts in his Defense Against the Dark Arts class. Too much? Anyway, I came up with "impossible skate spider moon balloon box clown"!

Are you ready to cast the spell?

You may find that this is impractical for every single password you need, but it is often suggested to follow this stringent method of physically rolling the dice for those "keys to the castle" scenarios like password to your password manager or your computer for example.

The lazy among us may instead send the word "riddikulus" and let the pseudo-random magic of the Python Diceware Library generate an amusing passphrase.

Go ahead, roll the dice. 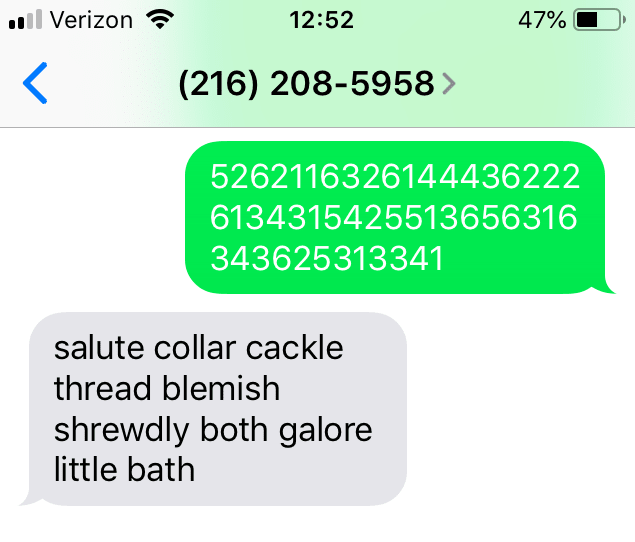 Questions about making the magic happen? Feel free to leave comments and issues on the Github repo or find me on Twitter. 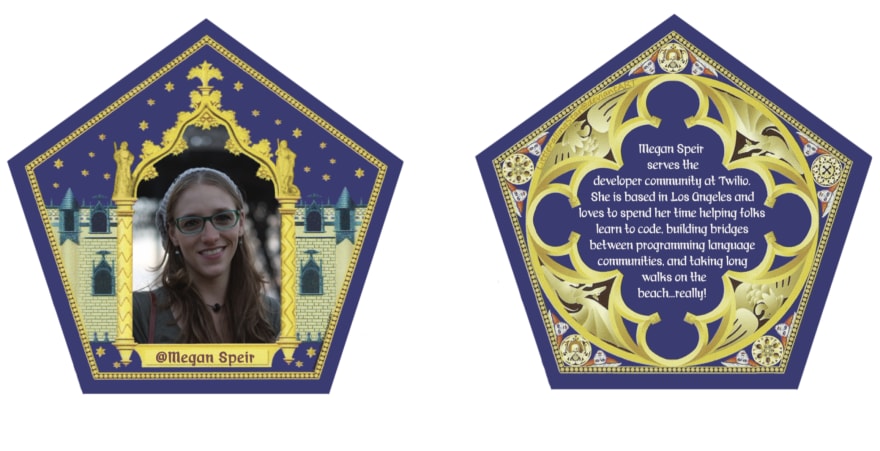 Get Started
Find your US Representatives and Congressional Districts with SMS and ASP.NET Core
#dotnet #csharp #aspnet #twilio
How to test SMS and Phone Call applications with the Twilio Dev Phone
#twilio #sms #phone #call
How to Send SMS from Airtable in 1 Minute
#airtable #twilio #sms #nocode

Once unpublished, this post will become invisible to the public and only accessible to Megan Speir.

Thanks for keeping DEV Community safe. Here is what you can do to flag twilio: