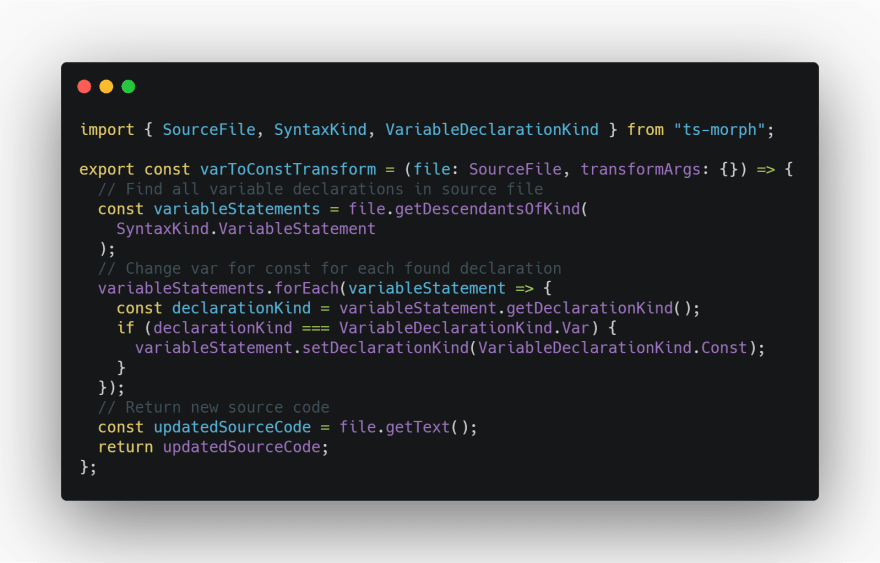 A library that allows us to write automated refactoring code modifications powered by David Sherret's ts-morph.

If you have a very large codebase and you want to change something across many files this tool will allow you to write a script that will do the work for you. This is a good idea because it can save you time but also because it can be used by other members of the team as a valuable source of information. The transform scripts can also be shared online as open source. A common example is a migration script for a breaking change in the API of a framework. You can release the new version of the framework together with the transform scripts to help the users of the framework to upgrade their version with ease.

You can install this module as a global dependency using npm:

Please note that if you have never used TypeScript or ts-node you will also need them:

Please Note: A TypeScript compiler configuration file (tsconfig.json) file is expected in the current directory when you run the previous command.

The transforms are powered by the ts-morph API. You can learn more about the API at https://ts-morph.com.

For additional help use the following:

I hope you enjoyed it, please let me know your thoughts!

Please note that at the moment this project is just an experiment is not considered a mature piece of software...

Wolk Software is a software consultancy and corporate training services company dedicated to empowering developers and teams to be their best.
code of conduct - report abuse

Become a VS Code Ninja with these Extensions and Tools [2020]