When I set up my Windows computer, I had the chance to take another look at the shell I'm using. The three main ones out there are Bash, Zsh, and Fish.

I knew of Bash. I used Zsh previously. But how would Fish fare? I've heard great things about it, so I tried it out.

I want to share which one I chose and how I went about setting it up.

Bash is the most basics of shells. If you open up a Terminal on Mac, or if you used Linux before, you've seen Bash. There's nothing super special about it.

You can create aliases, make functions, export variables, and run commands. That's about it.

Some people managed to make Bash shells look amazing. I have no idea how to do it (nor do I have the programming chops and patience to try this for myself).

I wanted my shell to look better. That's why I went with Zsh in the past.

Functionally, there's nothing different between Zsh and Bash. You can also create aliases, make functions, export variables, and run commands.

What Zsh brings to the picture is colour customisation. You can change the theme and colour of your shell without much programming capabilities.

All we had to do was install a "package manager" of sorts called oh-my-zsh.

Oh-my-zsh let you switch between built-in themes by changing one line of code. You can find out more about the themes here. You can also include plugins to make Bash-ing easier than before!

Here's how my shell looks today (with the avit theme).

Fish (again) is another shell. Functionally (again), there's nothing much different between Fish, Bash, or Zsh. You can still create aliases, write functions, export variables, and run commands.

On first glance, Fish stands out because it comes with these two features out of the box:

Fish suggests commands as you type. These suggestions are in gray. 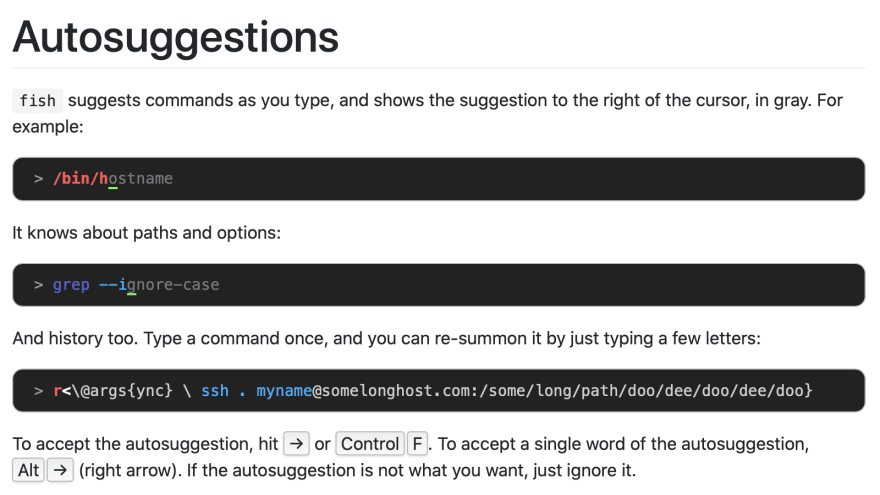 Fish knows about paths and options. It can even give you suggestions from the man page. This was something I never saw before, until today.

Syntax highlighting is amazing. It shows you whether your command exists before you even hit enter. 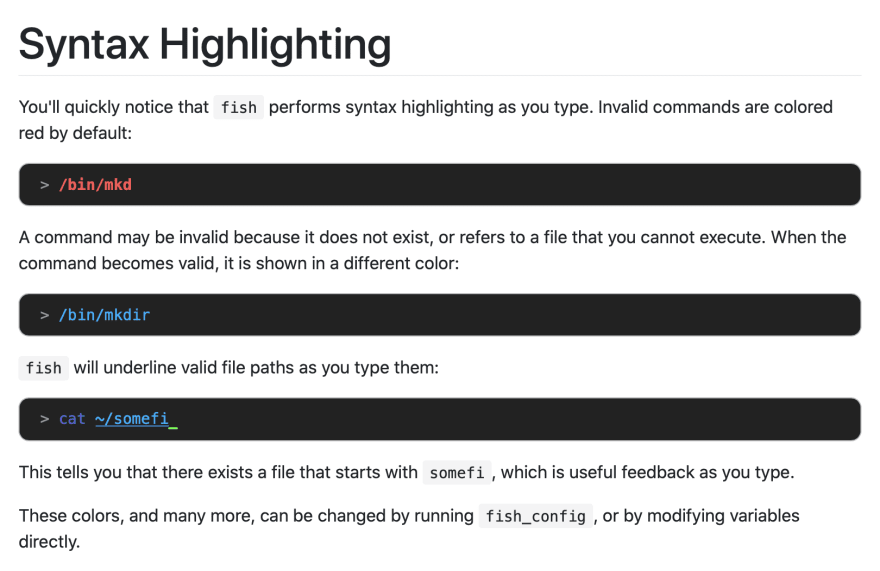 You'll know whether you're typing anything wrong before you hit enter. This saves some keystrokes and unnecessary frustrations.

The Verdict: Bash, Zsh, or Fish?

I recommend Fish, but I use Zsh.

I recommend Fish because it's easy to get started. You don't need any Bash chops to install Fish and Fish themes. For Zsh, you need to be able to edit the .zshrc file. You also need to be able to download plugins and put them in the .oh-my-zsh/custom folder. This takes more skills.

I use Zsh because I have a bunch of aliases and functions written in Bash. I don't want to convert them into the Fish.

Fish syntax is simply just different. It's not easier or harder. Here's an example of how you'd set variables Fish vs Bash.

The biggest difference (to me) is Fish doesn't have aliases. You need to use Functions. Bash uses aliases.

I don't want to convert my functions and aliases into Fish syntax. I don't have the time nor space to it right now. So I continued to use Zsh.

I think I won't ever use Fish because of the difference in syntax... But I want the automatic suggestions and syntax highlighting features from Fish.

People have built Zsh plugins that give us Fish-like auto-suggestions and syntax highlighting. Here are links to these plugins:

Installing these plugins is quite simple.

The basic idea is:

Being the nerd I am, I created an installation script that helps you (me, actually) install Zsh, Oh-my-zsh, and Zsh plugins with a single command. It fixes Zsh plugin permissions as well.

You can find this script in my Dotfiles repository. I call it install-zsh.sh.

You have to add the plugin into your own .zshrc though!

I use four plugins so far:

Do you know of any useful Zsh plugins? Please share them with me! Also, I'd love to hear your thoughts on Bash vs Zsh vs Fish if you have any :)

Background Jobs are not run at $PSScriptRoot

Once unpublished, this post will become invisible to the public and only accessible to Zell Liew 🤗.

Thanks for keeping DEV Community 👩‍💻👨‍💻 safe. Here is what you can do to flag zellwk:

Unflagging zellwk will restore default visibility to their posts.