Let me break it down and explain the wording:

Git itself is not to be confused with github, gitlab, bitbucket and so on.

Why a Version Control System like Git is needed

Real life projects generally have multiple developers working in parallel. So a version control system like Git is needed to ensure there are no code conflicts between the developers.

Additionally, the requirements in such projects change often. So a version control system allows developers to revert and go back to an older version of the code.

Finally, sometimes several projects which are being run in parallel involve the same codebase. In such a case, the concept of branching in Git is very important.

Rather than mentioning all the concepts at once, I will explain the concepts of Git through an example so that it is easier to follow.

This link has details on how to install Git in multiple operating systems:
https://git-scm.com/book/en/v2/Getting-Started-Installing-Git

Verify if Git is installed by using the following command in the command prompt:

In your computer, create a folder for your project. Let’s call the project folder simple-git-demo.

Go into your project folder and add a local Git repository to the project using the following commands:

The git init command adds a local Git repository to the project.

Create a file called demo.txt in the project folder and add the following text into it:

Here we will be demoing with just plain text instead of actual code, since the main focus of this article is on Git and not on any specific programming language.

Staging and Committing the code

Committing is the process in which the code is added to the local repository.Before committing the code, it has to be in the staging area. The staging area is there to keep track of all the files which are to be committed.

Any file which is not added to the staging area will not be committed. This gives the developer control over which files need to be committed.

Use the following command for staging the file:

In case you want to add multiple files you can use:

If you want to add all the files inside your project folder to the staging area, use the following command:

Use this carefully since it adds all the files and folders in your project to the staging area.

Use the following command to commit the file:

Now modify the demo.txt file and add the following snippet:

Use the following command to see the status:

The status shows that demo.txt is modified and is not yet in the staging area.

Now let us add demo.txt to the staging area and commit it using the following commands:

Use git log to print out all the commits which have been done up until now.

The log shows the author of each commit, the date of the commit, and the commit message.

Up until now we have not created any branch in Git. By default, Git commits go into the master branch.

What is a branch?

Why are multiple branches needed?

Multiple branches are needed to support multiple parallel developments. Refer the image below to see how branches work. 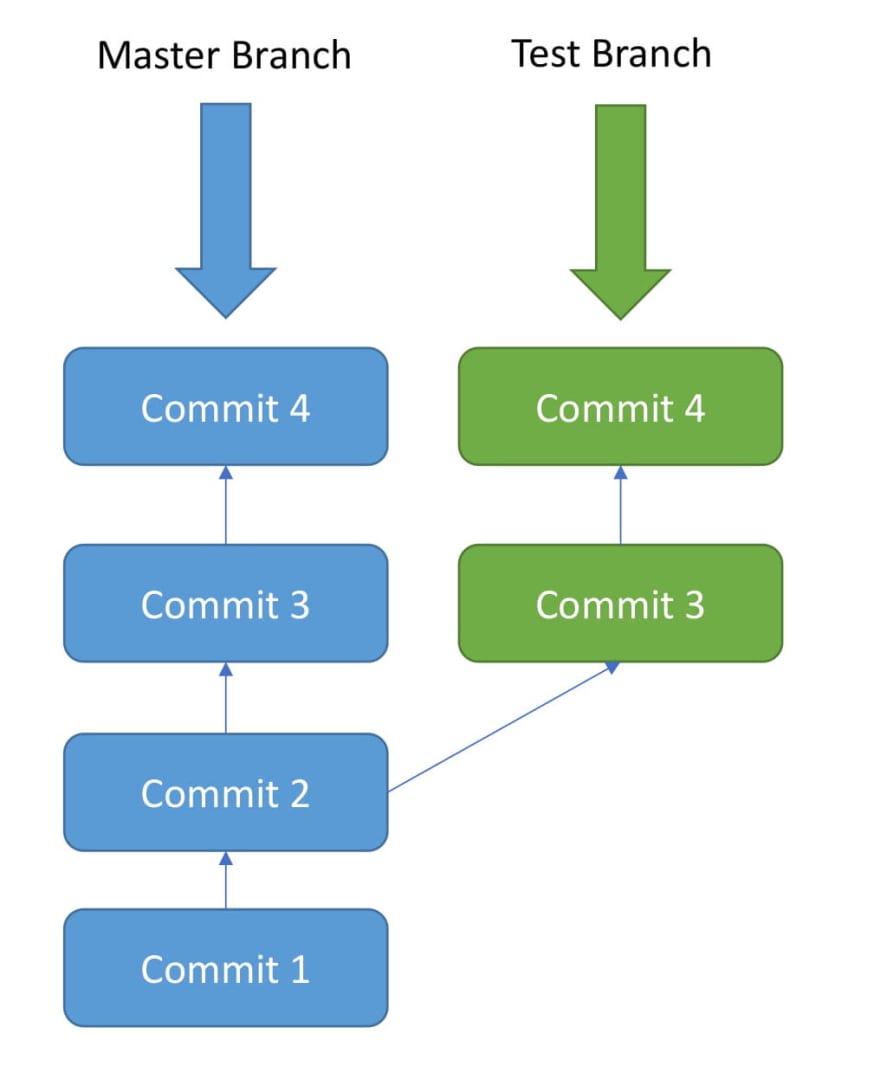 Initially, commit 1 and commit 2 were done in the master branch. After commit 2 a new Branch called as “Test” is created, and commit 3 and commit 4 are added to the test branch.

At the same time, a different commit 3 and commit 4 are added to the master branch. Here we can see that after Commit 2, two parallel developments are being done in 2 separate branches.

The Test Branch and the Master Branch have diverged here and have different code — the code from Test Branch can be merged with the Master branch using git merge. This will be covered later.

Create a New Branch in Local

This command creates the test branch.

We are still in the context of the master branch. In order to switch to the testbranch. use the following command:

Now we are in the test branch.

You can list out all the branches in local using thefollowing command:

Do Some Commits in the New Branch

This commit was done in the Test Branch, and now Test Branch is ahead of Master Branch by 1 commit — as the test branch also includes the 2 commits from the master branch.

You can verify the commit history in Test Branch using:

Currently, Test Branch is ahead of the Master by 1 commit. Let’s say that now we want all the code in the Test Branch to be brought back to the Master Branch. This is where git merge is very useful.

In order to merge the code from the test branch into the master branch, follow
these steps:

First go back to the master branch:

Then run the merge command:

After running these 2 commands, the merge should be successful. In this example, there are no conflicts.

But in real projects, there will be conflicts when a merge is being done. Resolving the conflict is something which comes with experience, so as you work more with Git you will be able to get the hang of resolving conflicts.

Run git log now and you will notice that the master also has 3 commits.

Here we will be using GitHub for the remote repository.

After registering in the GitHub homepage, click on Start a Project to create a new Git repository. Give the repository a name and click “Create Repository”

Give the name as git-blog-demo.

This will create a remote repository in GitHub, and when you open the repository, a page like the image below will open up:

The repository URL is the highlighted portion https://github.com/aditya-sridhar/git-blog-demo.git

In order to point your local repository to the remote repository, use the following command:

In order to push all the code from the local repository into the remote repository, use the following command:

git clone is used to clone an existing remote repository into your computer.
The command for this is:

Now you know the basics of how to use Git, so go ahead and explore more!😃

I Love technology and follow the advancements in technology. I also like helping people with my technology knowledge

How I got my first job as a junior developer at 40+ of age after 6 months?

Learn to code. Code to learn.