Arthur Samuel First coined the term and described it as: “the field of study that gives computers the ability to learn without being explicitly programmed.”

Tom Mitchell provided a more formal definition:
“A computer program is said to learn from experience E with respect to some class of tasks T and performance measure P, if its performance at tasks in T, as measured by P, improves with experience E.”

Sounds both interesting and confusing at the same time. isn't it?

One another question that comes in mind is that why there are so many terms related to it like Deep learning, Artificial Intelligence, Neural Networks? Are they all same or something different?

Artificial intelligence (AI) refers to the simulation of human intelligence in machines that exhibits traits associated with a human mind such as learning and problem-solving.
In simple words, when you see a machine taking decisions like a human, it is an AI.

Deep learning is the functioning of AI which mimics the workings of the human brain in processing data for use in detecting objects, recognizing speech, translating languages, and making decisions.

Neural networks are a series of algorithms that mimic the operations of a human brain to recognize relationships between vast amounts of data.

You can relate the above all terms by the given image. 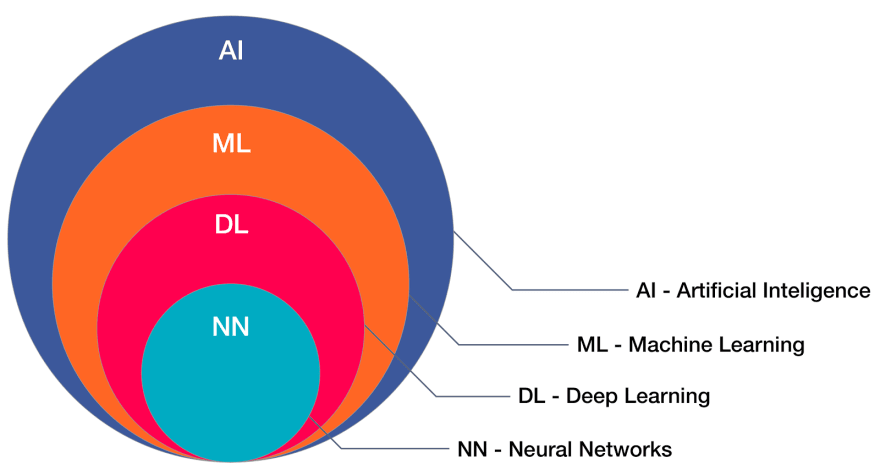 Should we go for ML or Development ?

According to me, ML is one of the most overrated topic of the decade. Development is now becoming underrated, only because of the cool things that you can do with ML.
Actually, its hard to Develop something completely from scratch, and it is nowhere comparable to ML.
Just by learning how to use a python library and applying it on a dataset to create a model, you cannot say that you know Machine Learning.
So while choosing anyone of them, you should have to depend on other factors.

Thanks for keeping DEV Community 👩‍💻👨‍💻 safe. Here is what you can do to flag ashuto7h: