In the previous articles, we have seen a simple example of how machine learning helps us to predict a target. There are many algorithms and ways to train a model, but all they need is data. whenever we take data from the real world, it always contains some irregularities. Data preprocessing is the first and foremost step after acquiring data which is used to put data in the desired format so that the model can be trained on it.

The whole process is known as EDA (Exploratory Data Analysis). EDA also includes visualizing data using various types of visualization techniques. we will cover them in the next part.

There is a great article on data preprocessing see it here

here we are only discussing the first type of data and its preprocessing.

Business knowledge is the most important thing while preprocessing data. It is often underestimated, but it matters most of the time.
Let's consider that a dataset contains a feature country. In that feature, Some entries are written as the UK while others are written as United Kingdom. Now both are the same, but if we don't have business knowledge then we can not figure this thing out, and this will eventually lead to wrong training.

Data Exploration means exploring various aspects of data. following are certain ways to do so in python -

when we import a dataset in python using pandas, it is stored in an object called DataFrame. the DataFrame object has various inbuilt methods among which describe() function gives the detailed statistics of numerical features of the dataset.

The describe() function returns a dataframe object in following format. 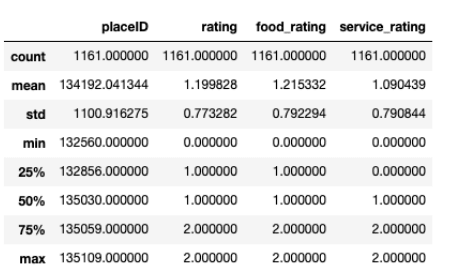 info() is another function provided by the dataframe object, which shows all the features with their data types and no. of values in each feature. 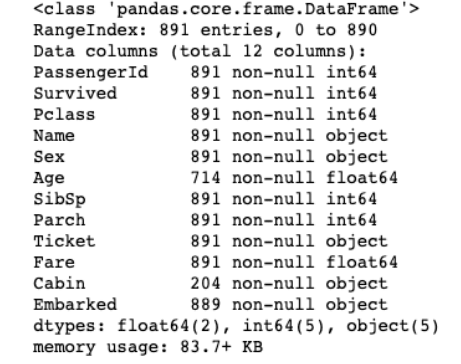 This is a much better way than the above two because it extracts almost all the information required to better explore the data. pandas profiling is a separate library from pandas.

To install or upgrade it, use

then use it as follows -

the pandas profiling generates an HTML report format that gives you various insights for each feature.

It is very common to have missing values in the datasets. Mostly they are caused because peoples do not like to fill every detail of the form. Sometimes it can also be caused by machine errors such as irregular functioning of a sensor or a device collecting data.
Be aware, because many times, the missing values can appear in other forms than an empty cell in a table.
Mostly when some fields are marked necessary, and people don't want to fill them, they use characters like - or ? or NIL. In the case of data gathered by devices, they have some default values in place of null like -1 or 0 or -99.

Look for frequencies of such values. if they mostly occur in your dataset, you can consider them as NaN (Not a Number). You can replace these values with NaN or can directly interpret them as NaN while loading the dataset for the first time with pandas.

The na_values replaces all values that match in given list and change them to NaN.

Getting count of all missing values.

There are mainly two ways to handle such values.

this option should be used when we have a very large dataset, and no. of rows removed after this operation will not affect much.

This option should be used only when the no. of missing values are too much ( > 50%) in a column.

central tendency is a central or typical value for a probability distribution. It may also be assumed that the whole data lies at the center or location of the distribution.

When data is numerical

there are two ways to find the central tendency. Mean and Median.
Mean should be chosen only when the data is distributed uniformly. Suppose if you have most of the values like 100,150,200,250 and only few like 800 then mean of these values will be 300, but median will be 200. Now, if we see, the metric which can approximately give us the central tendency is median in this case.
so whenever, there is a large difference in mean and median, we should choose median.

When data is categorical

Central tendency lies with most frequent category in such cases.

an outlier is a data point that differs significantly from other observations. 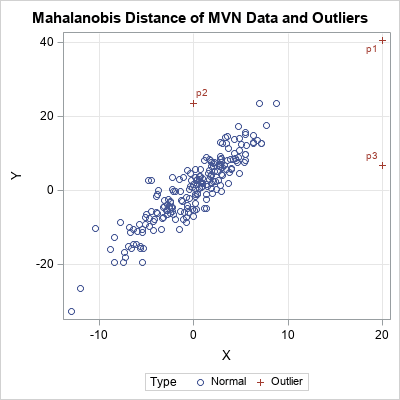 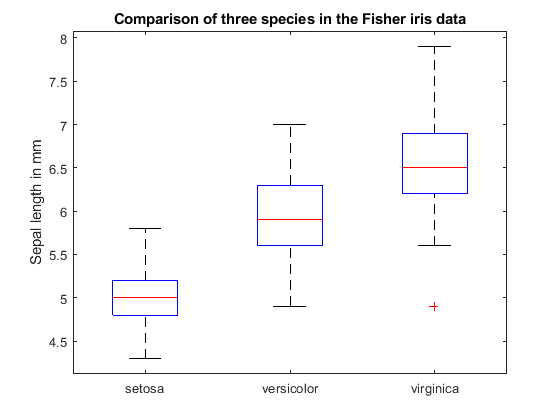 Normalization is a concept in DBMS in which a database is said to be in first normal form, if it contains atomic values (value that cannot be divided). To solve such kind of problems, you can refer to stackoverflow.

Another problem that is observed is dealing with dates. A date object is always represented in form of strings. we can use pandas to extract year, month, day, week etc from the date.

Seasonality is a characteristic of a time series in which the data experiences regular and predictable changes that recur every calendar year. Any predictable fluctuation or pattern that recurs or repeats over a one-year period is said to be seasonal. The most easy example is Rainfall.

Any feature of dateset that shows seasonality with time, can cause instability to the model because it never shows a clear relationship with output. So if the target is itself not a seasonal value (models exist for such predictions) then we should remove seasonality from such data.

A common way to deal with seasonal data is to use differencing. If the season lasts for a week, then we can remove it on an observation today by subtracting the value from last week.
Similarly, if a season cycles in a year, like rainfall then we can substract the daily maximum rainfall from same day last year to correct seasonality. 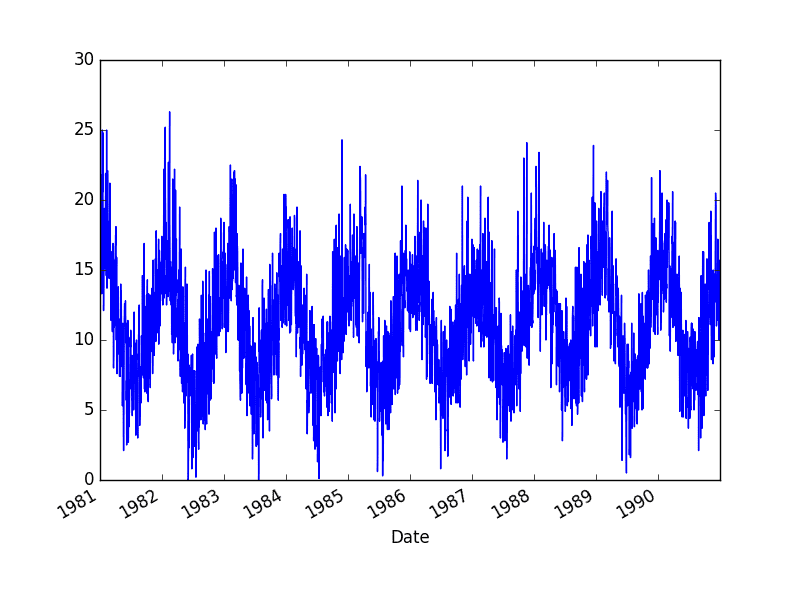 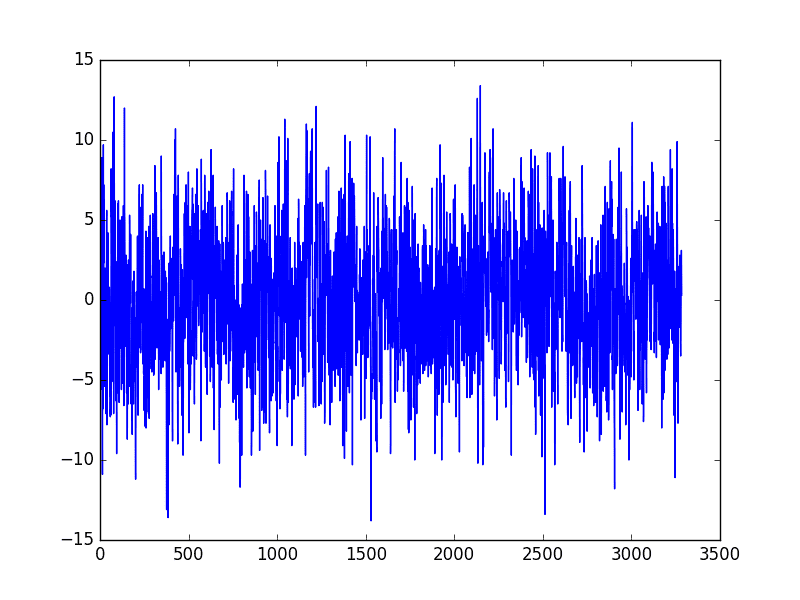 Bivariate analysis is a quantitative analysis, which involves two variables for determining the empirical relationship between them.
This can be done drawing plots between two variables and check their distributions. 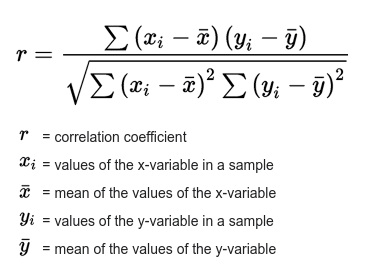 why should we remove higher correlation features?

correlation measures only the association between the two variables. It doesn't tells causation. i.e., large values of y is not caused by large values of x. When we have highly correlated features in the dataset, the variance will also become high. this causes instability in model. The model becomes sensitive towards these values and slight changes in them affects the whole model.
So it is better to drop any one feature if two features are showing a higher correlation. 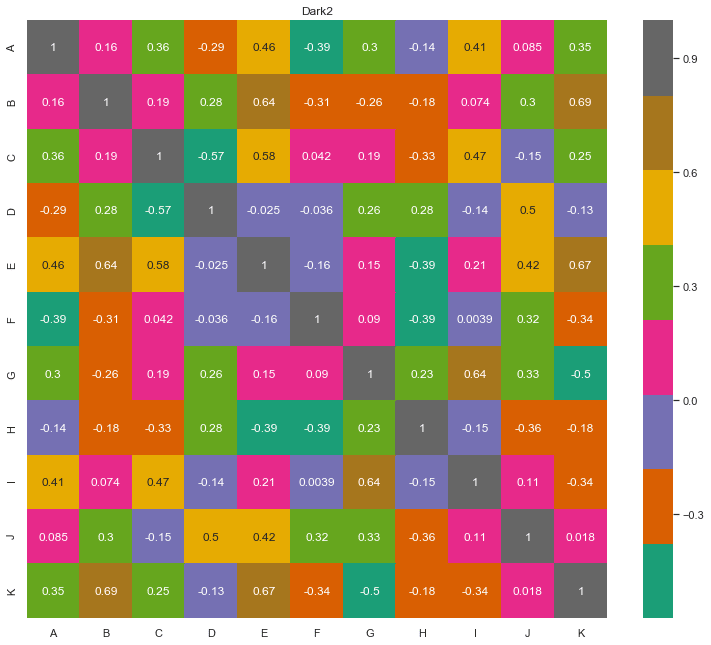 image source : google
The heatmap shows the correlation values of all the features with others. We can analyse which two feature are highly correlated and remove any one of them.

Before moving further we have to recognise what categorical data is. Many times we think that if a variable is in the form of objects(strings) then it is a categorical variable.
suppose a dataset contains a feature year, which depicts only 3 distinct years - 2008, 2009, 2010. Are these values categorical or numerical?
They are categorical values, but their numerical interpretation is a problem for model. Also the model can only work over numerical data. That means we cannot use categorical data containing strings. To use such features, we have to transforming them into numerical form.
For example, we map our categorical data to simple counting numbers like 0,1,2,3...
This is called label encoding.

What if the categories are ordinal? we have to encode them in an order. example, if a dataset contains some grades from Ato D, which are correlated to marks. A means good marks, D means bad marks. then this is a ordinal variable. we have to encode it in same order that it follows. means A = 0, B = 1, C = 2, D = 3

Again, one hot encoding causes higher correlation between its values. so we should drop a feature after one hot encoding.
Scikit learn provides this inbuilt functionality.

Scaling means fitting the data values under a common scale (range).
suppose we have a dataset having two features on completely different scale. one feature lies in range 1 to 30, while other lies in range 4000 to 100000. Now there are some algorithms like K nearest neighbor, which classify data points based on distances between their features. In such algorithm, values of feature having small range will not be going to affect the distance majorly. So, having such a feature is meaningless. Almost every algorithm in ML deals with such kind of geometrical distances, except decision tree category algorithms.
You can refer to this article for more info about algorithms.
So there is a need to bring them on a common scale.

There are mainly two types of scaling techniques.

before and after standardization 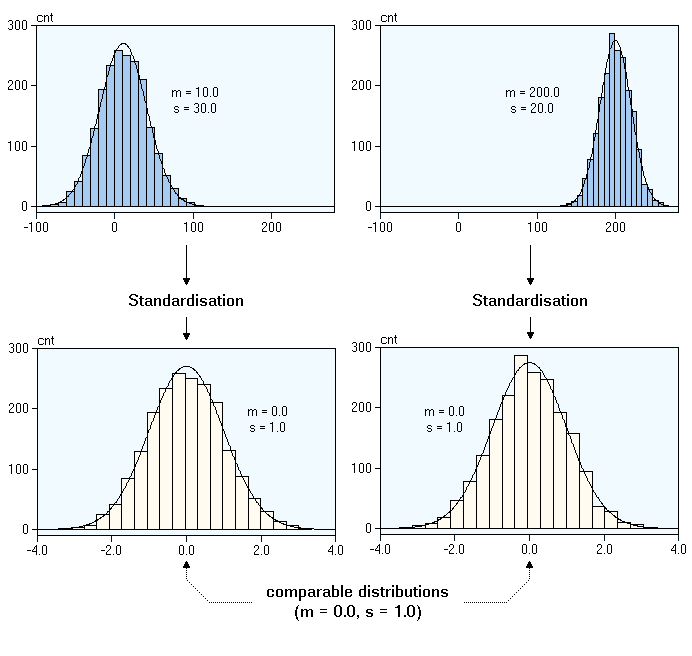 image source : google
Standardization should be done when the data shows a bell curve a.k.a Normal Distribution or Gaussian Distribution.

Normalization is used to scale the data of an attribute so that it falls in a smaller range, most commonly a range between 0 to 1. 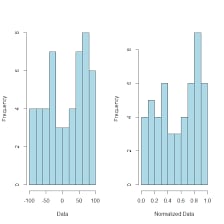 Normalization is well suited when data values appear to be continuously increasing or decreasing.

In around 2018, Amazon crafted an AI recruiting tool that review the job applicant's resume and give them ratings, similar to the amazon shopping ratings. The AI was trained on the basis of previous applicant's data, most of which are men. The AI became bias towards men and taught itself that men candidates are mostly preffered. The gender of candidate was not explicitely given to him, but he found that by their resume finding words like women, female chess champion, etc and rated them low for job.
This all happened because the training data was imbalanced. There are two ways to handle imbalanced data.

ADASYN is a generalized form of the SMOTE algorithm. Only difference in SMOTE and ADASYN is that it considers the density distribution, which decides the no. of synthetic instances generated for samples. It helps to find those samples which are difficult to learn. Due to this, it helps in adaptively changing the decision boundaries based on the samples difficult to learn.

We will see different visualization techniques and plots using matplotlib and seaborn in next article.

How to choose a coding course for beginners ✨

Thanks for keeping DEV Community safe. Here is what you can do to flag ashuto7h: