Here our task is to find how the dependent variable(Y) can be predicted on the basis of the Independent variable(X). for this, we consider that all the set of points (x,y) lies on a straight line, which means there is a linear relationship between them.

But how it is possible to get accurate results by such an assumption? It is true that some points don't lie on the line and there will always be an error in our result, but you cannot expect a machine to be fully accurate. we will get good accuracy with a huge dataset.

now the question arises that how to find such a line. No, we don't have to take a paper and start plotting all the points.
Recall geometry, which states that the equation of a line is
y = a + bx, where b is the slope (gradient) and a is the y-intercept. if we can find the value of a and b, we can find a value for y according to the given x. in this way we will be able to predict the value of y.

What we have discussed till now was based on simple linear regression, in which the value of y depends on one independent variable x.

Steps for training a model

You can use Jupyter Notebooks along with Anaconda or simply the google colab. If you are using google colab you have to import the file from Github or via google.colab module. colab has some good accessibility features. Jupyter runs on your local machine so if you are low on resources, you should go for google colab.

The first step for getting a model trained is to collect data. I prefer using Kaggle or UCI Machine Learning Repository which provides various types of datasets. datasets are mostly available in form of CSV files(comma-separated values).

The dataset that we have taken for Multiple Linear Regression is from the UCI Machine Learning Repository.
you can get the CSV files from here

The averages are taken from various sensors located around the plant that record the ambient variables every second. The variables are given without Normalization.
We have to train the model for the prediction of PE

pandas is a python library that can help you to convert CSV, excel, list, dict, NumPy array to dataframe.
we will use it to import our csv file.
if you are using colab, first upload your CSV file to colab then its path will be available as '/content/file_name.csv'

info() gives you info about your dataframe and head(5) returns first 5 rows of the dataframe.

Before training a model for any type of data, the data needs to be preprocessed to make it ready for training. we will cover all the types of preprocessing techniques in the next article.

Our dataset currently doesn't require any preprocessing, except for feature scaling, but that is also managed internally by sklearn.

here test_size determines the size of test data. in this case test data is 20% of the whole data. random_state determines how the random function will work.

Fitting the model and predicting the values.

And Here is your model trained.
you can see how nearly it predicts the values of "PE".

model.score() calculates the R square value.
In this case, the value of r_sq tells that the accuracy of the whole model is 92.86% while that of the training set is 92.77% and of the test set is 93.25%
model.intercept_ returns the intercept value b0
model.coef_ returns the list of coefficients (slopes) b1 b2 b3....

it is one of the methods used for Feature Selection.
Steps :

There is one thing to take care of.
y = b0 + b1.x1 + b2.x2 + b3.x3 ...
In the above equation, if you notice that every Xn has a multiplier bn but not the constant b0. The package statsmodel only considers a multiplier if it has a feature value. If there is no feature value then it would not get picked up while creating the model. So the b0 would be dropped. but if you have a x0 and set it to 1 that will solve the problem. Hence we need to create a feature with value = 1. 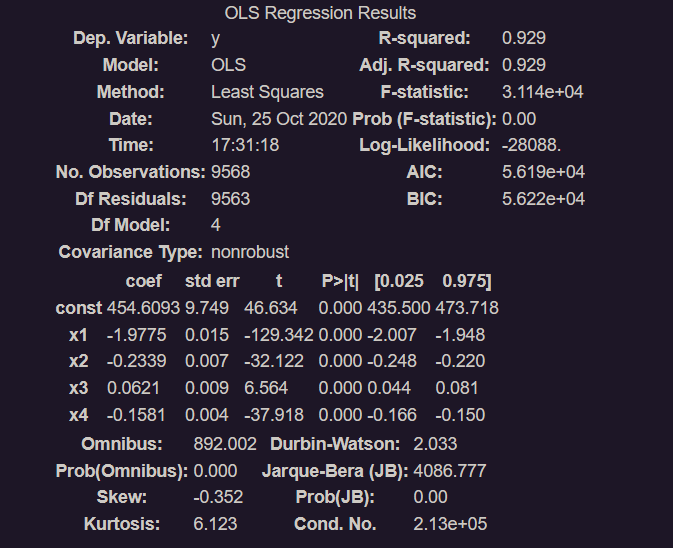 if you see the P > |t| column there is no value, that is greater than 0.05. so there is no useless feature in our model.

Practice by yourself. choose a dataset and try to fit the model for it. Remember that we have not dealt with various factors like categorical variables and null values yet. they all will be covered in the next article on data preprocessing. Choose your dataset wisely.

Editing and Deleting with MongoDB (Discord.JS)

Thanks for keeping DEV Community 👩‍💻👨‍💻 safe. Here is what you can do to flag ashuto7h: