Chapter 2: Overview of the Infrastructure and Components.

Chapter 1 of this series explained the advantages and disadvantages of a Microservices architecture, in addition to the design considerations required to implement an infrastructure that is robust and adequate enough to host such types of architectures.

This chapter provides an overview of the proposed infrastructure, and explains the different components used, along with the advantages it provides. 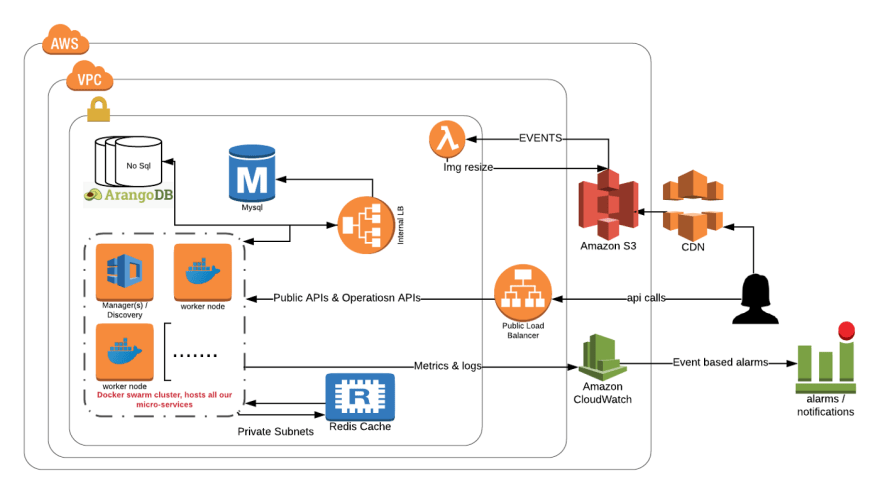 The diagram above depicts an infrastructure, in which multiple resources are deployed. Aside from S3, Cloudfront, and Cloudwatch, all the resources are created and deployed inside the VPC. More importantly, all of these resources are inside private subnets, as can be seen later in this article. Resources spawned in private subnets only possess private IPs, and therefore cannot be accessed directly from outside the VPC. Such a setup maximizes the security. In fact, a database launched in a public subnet, and protected by a password, no matter how strong it is, is at a high risk of being breached directly (Simple brute force attack). However, a database launched in the private subnet is practically nonexistent for anyone outside the VPC. Even if not secured with a password, the database is only accessible to users inside the private network.
The communication between the application components, such as microservices and databases passes through a load balancer. In more details, each microservice, database, or any other component is attached as a target group to a load balancer. The components that are given access to from the internet are attached to an internet-facing load balancer, whereas the backend system components are attached to an internal load balancer. This approach maximizes the availability, load balancing, and security of the system. To better explain the aforementioned, consider the following example:

Assume an application composed from a front-end microservice, an api gateway microservice, a backend-end microservice, and a database. Typically, the frontend, and api gateway services should be accessed from the internet. Therefore, they should be attached as two target groups to the public facing load balancer. On the other hand, the backend service, and the database must never be accessed from the outside world, thus attached to the internal load balancer. Consider a user accessing the application, and requesting a list of all the products available, below is the flow of requests that will traverse the network:

Now that the page is loaded on the user’s device, another request should be made by the page asking to fetch the available products.

If the page loaded contains files available in an S3 bucket, that is synced with AWS Cloudfront, the following steps are performed:

Attaching the services as target groups to the load balancers provide multiple advantages (Which will be explored in details in the following chapter), namely security, through only allowing requests that match certain criteria pass, and load balancing, by balancing the requests through all the replicas registered of the same service.

In summary, this article described a brief overview of the infrastructure proposed, how it operates, and the advantages it provides. The next chapter will describe in details how microservices should be deployed in a secure, available, and scalable fashion, in addition to setting autoscaling policies and alarms.

Once unpublished, this post will become invisible to the public and only accessible to Nicolas El Khoury.