The Game of Life is not a game in the conventional sense. There are no players, and no winning or losing but its a good coding challenge to solve :)

The universe of the Game of Life is an infinite two­dimensional orthogonal grid of square cells, each of which is in one of two possible states, alive or dead. Every cell interacts with its eight neighbours, which are the cells that are horizontally, vertically, or diagonally adjacent.

At each step in time, the following transitions occur: 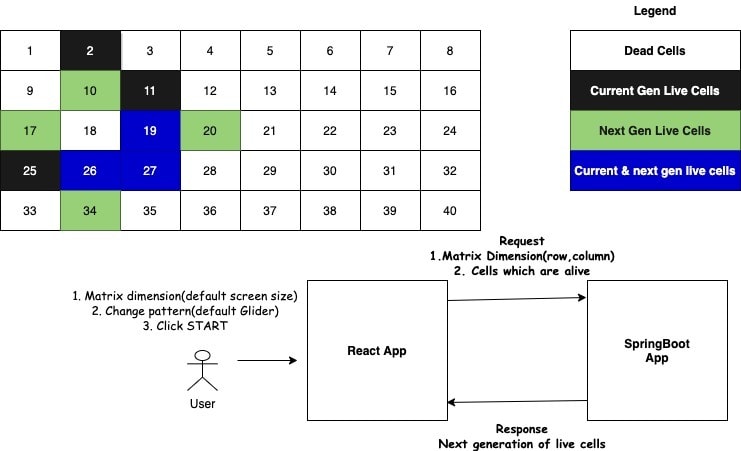 As seen in the above diagram, the user needs to input data to start the game

Based on the input data selected, the front end makes a request to the backend to retrieve the next generation of live cells which is populated in the UI.

If the validations are successful (matrix dimension is valid), in order to generate the next set of generations below steps are performed.

For eg, Cell 1 (current dead cell) -> neighbours are 2(L), 9, 10 and only one cell is currently live and hence as per rules, it won't survive the next generation.

Similarly for each cell, their next-generation status is identified.

This solution is available in Game of Life UI

Regardless of the size of the matrix, this solution would take constant time(considering a finite number of alive cells) because the size of the matrix is not used in any calculation apart from identifying the neighbour cells which will be constant. If you have solved this problem in a more efficient approach, Please share it here I would like to know.

How To Publish A Static React/Node.js App Using cPanel (the easy way)