Last week, The Practical Developer released a 58 question survey asking a variety of questions surrounding the professional and personal life of a programmer. Questions ranged from stress levels, income, opinions on famous figures, and much more. 450 programmers responded to the survey, enough to gather some interesting results. This was a simple public survey and not an in-depth study and should be treated as such, but the findings are interesting and anyone who wants to analyze or visualize the data further is encouraged to do so.

Here are the results in a few different formats:

From Python programmers' lack of trust in the government to the tabs vs spaces debate, we have listed some things we found interesting with the survey. Some of these findings can be deemed absolutely statistically significant, while some are just interesting nuggets.

When asked "How trustworthy is you government?" on a scale from 1 to 10, programmers who worked at smaller companies were the least trusting, at an average of 3.43 vs 4.71 for larger companies. Among the more popular programming languages, Python scored as the least trusting, with an average score of just 3.27 out of 10. Programmers in general do not trust their government, as the average score overall was 4.22.

Size of company vs Trustworthiness of government

Women are four times more likely to have been harassed at their jobs. About one quarter (25.2%) of women who answered the survey responded "yes" to the question "Have you experienced harassment at your programming job?", compared to 6.2% among men. The question could be open to interpretation and does not imply that women are harassed consistently at that rate, but the segmentation between genders is starkly clear and the number is one that we can all agree is far too high.

On a more lighthearted note, there is a glaring gender-bias on the devide between tabs vs spaces. 59.6% of men use spaces to indent their code, whereas women are the reverse. 61% of women use tabs. It is fairly remarkable to me how there is a statistical significance between tabs and spaces. It seems so random because for most answers, men and women more or less had very similar behaviors and opinions

We asked people to rate some notable figures in terms of "greatness" on a scale from 1 to 10. And the results were interesting. 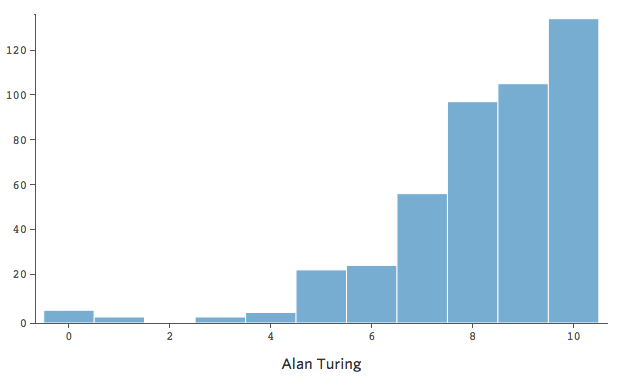 Programmers think very little of Mark Zuckerberg as far as "greatness" is concerned. I was not sure what to expect, but it is interesting to see Aretha Franklin score higher than these two technology legends. Steve Jobs was the most polarizing figure, with a standard deviation in the survey of 2.56.

It is worth noting that people who self-declared as "smarter" positively correlated with rating Jobs and Zuckerberg higher. It was the only correlation that stood out between self-declared intelligence and rating of these icons. I would be interested to see what other data correlations people are able to come up with.

These highlighted results are only a few of the many stories that this data could tell. I would be interested to see if anyone can find correlations between programmers' expectations of an upcoming "tech bubble" and other responses to the survey. Respondants were about split on whether they thought one was approaching but I did not uncover any indicators myself in the rest of the data. By the way, here is a link to just a list of the answers to the question "Which buzzword annoys you the most?"

Go CDK! What this Mean for the World of IaC