If you are reading this, you already know that there is a new 'framework' in town. This may sound like everyday news in the Javascript world, but before you roll your eyes and go on a twitter rant, let's see what all the FUSSion is about.

NO! Fusion.js is not a replacement for React. To be precise Fusion.js is feature-rich-boilerplate built on top of react & redux which tries to ease major pain points of modern Single Page Web Appications.

It's been few hours since the launch of fusion.js so this is not a deep dive but a brief summary & first impressions on Fusion.js.

Server Side Rendering out of the box

SSR-ing your SPA has always been a bit tricky. There are various boilerplates that provide you setups to render your app on the server and hydrate it on the client. But these setups are quite opinionated and are deserted after some time, leaving you on your own. Fusion.js supports server-side-rendering right out of the box. Which means, isomorphic universal webapps which render on server and hydrate in the browser and SEO friendly pages which load faster.

Bundle splitting on an SSRed react-redux SPA has always been a front-end developer's wet dream. But configuring webpack for it and getting it to work as intended in all major browsers has been a nightmare. Also, Hot Module reloading is a blessing for devs, right? Both supported out of the box in Fusion.js.

A single entry point architecture enables Fusion.js to run it's code universally on the client as well as on the server. Thus also enabling plugins to be universal too. It allows plugin developers to co-locate snippets of code based on the library the code pertains to, as opposed to the environment the code runs in.

This can be better understood by this graphic: 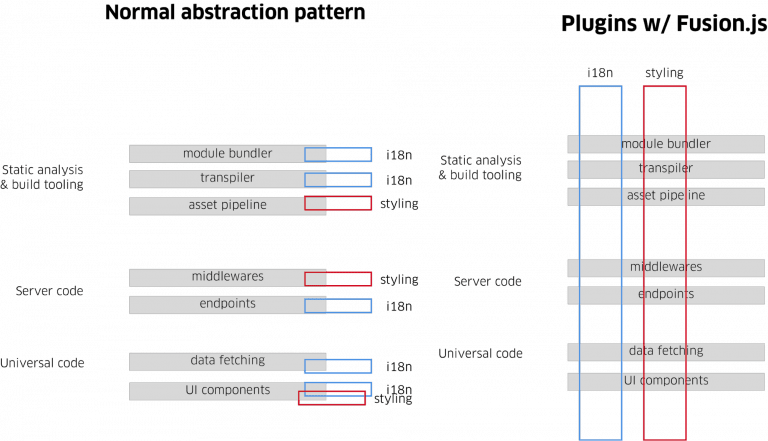 plugins logic based on their logical grouping rather than based on where the code needs to be added.

Plugins can expose well-defined APIs as services to other plugins, and a plugin's dependencies can easily be mocked during tests. This is especially important when dependencies are responsible for communicating with data storage infrastructure or when they relate to observability (e.g., logging, analytics, and metrics). 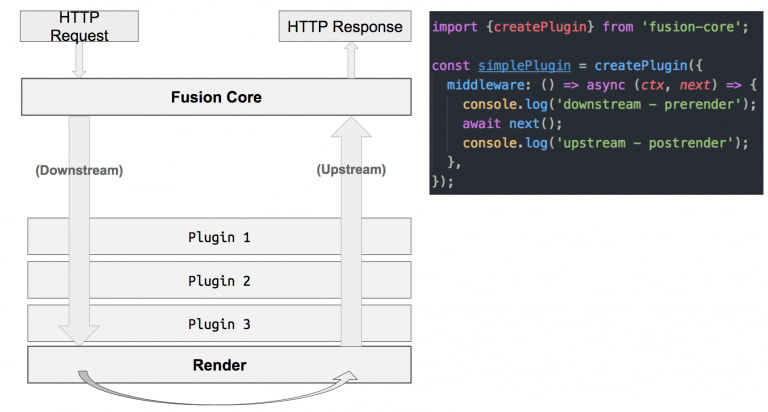 Most of the SSR, code-splitting solutions out there are based on Express. Express has an API that encourages side effects which made complex response transformations difficult to encapsulate and test. Fusion.js however is based on Koa, which provides a more unit-test friendly context-based API, and an elegant and lightweight abstraction for request lifetime management based on the concept of downstreams and upstreams. Fusion.js core segregates network side effects from application state and leverages Koa and DI to achieve loose coupling between subsystems.

Test by your Taste

Fusion.js support modern test tooling such as Jest, Enzyme & Puppeteer. Apart from these, it also provides tools to test plugins. The fusion-test-utils package allows mocking the server itself, making it possible to quickly run integration tests between any permutation of plugins and mocks.

It's possible to use any CSS framework or library with Fusion.js. By default Fusion comes with support of Styletron, a high performance atomic CSS library that is maintained by the Fusion.js team.

Fusion apps can use the fusion-plugin-react-router to integrate routing features into the component tree. The plugin uses react-router under the hood, and exposes a similar API which allows you to add routing behavior anywhere in your component tree.

Open source projects from big companies always warm my heart. Being a front-end developer setting up SSRed, code-splitting setup on react, redux & express was one of the hardest challenges I've faced. So, seeing such setup open sourced which is also used on a large scale by Uber is really nice.

We already have amazing modern web setups like Next.js, Gatsby, Electrode , the more the merrier. I can't wait to use Fusion's in my next project and find out how it plays out. What do you think about Fusion.js?

Once suspended, bytegasm will not be able to comment or publish posts until their suspension is removed.

Once unsuspended, bytegasm will be able to comment and publish posts again.

Once unpublished, all posts by bytegasm will become hidden and only accessible to themselves.

If bytegasm is not suspended, they can still re-publish their posts from their dashboard.

Once unpublished, this post will become invisible to the public and only accessible to Bytegasm!.

Thanks for keeping DEV Community 👩‍💻👨‍💻 safe. Here is what you can do to flag bytegasm:

Unflagging bytegasm will restore default visibility to their posts.