Exciting year to be a web developer.

Welcome to 2018, where websites are the new rage. Mind you, we call them webapps and not websites anymore. Every developer is in the race to deliver the fastest first byte. Forbes new mobile site renders in 2.5 seconds, BookMyShow’s web conversion rates up by 80% and OLX has seen 250% more re-engagement on their website. What’s going on in this world wide web? With scary Javascript-CPU-profiler graphs that look like cardiograms of the lochness monster, all is being done to optimize every little bit we send down the wire. With google leading the bandwagon, all devs are set on the path to make the web great again. Oh, did I tell you websites can send notifications? And yes, offline websites are a thing now.

Let’s go back to 2010, the rise of the smartphone pandemic. Thanks to iPhones & cheap android phones, you could find every second person using a smartphone. Every second guy was shooting angry birds or being a fruit ninja, whatsapp was becoming the goto communication channel and people were actually paying to download an app. All of a sudden every company wanted to have an app. But why?

Offline access: Since apps are download-once-use-forever, once downloaded a user can access them just on tap.
Re-targeting by notifications: You can make your users come back to the app by sending them notifications, relevant product information to capture their attention.
Native features: A native app has compatibility with a devices’ hardware and features like camera, location, sensors, file system etc.
Better performance: Since apps have access to device hardware and they have freedom of design, apps are supposed have a better performance and speed.

The problem with mobile apps

Low new app downloads: Majority of smartphone users do not download new apps. Consumers spend 80% of their time on these 5 apps. Top 10 heavily used apps are owned by facebook & google. 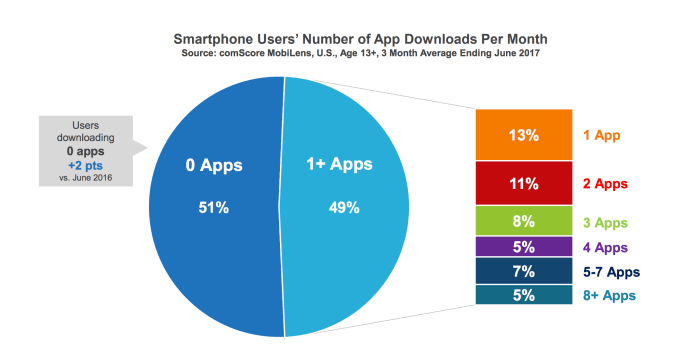 Barrier to entry: Getting a user to download an app, spend time and data for the download and then getting to use it is a big barrier in app acquisition.
Apps are storage intensive: With most iphones users running out of space frequently and cheap android phones with low storage capabilities, downloading and keeping an app is a tough choice for a lot of users in developing countries.

The world wide web has been the go-to source for our information consumption since the advent of internet. Let us check out why web still exists and wins:

Discoverability: You search something on google and bam! you’ve a list of websites you never knew existed. Its easy for you to discover new content on web and the websites to be discovered.
Broader Reach And Instant Access: From low-end feature phones to shiny iphones, each one of them has a browser in it. Hit a URL and voila, you’ve the content to you in a matter of seconds irrespective of the device config.
Shareability: Even when native apps need to share something over the web they need a web URL. URLs are the best way to point someone to a source.
Development: A website doesn’t need to be developed differently for every other OS or device. Its awrite-once-run-everywhere thing.
Updates & maintenance: You can update your webapp multiple times a day but updating an app frequently? Boy your users are going to be so pissed.

Android phones can be so annoying.Just received a notification that my Bible App needs update, 4 what exactly? Has Adam eaten another apple?

What if you marry all the goodness of the web with features that native apps provide? You get progressive web apps. Let’s see what all Progressive Webapps can do.

Installable: With just a tap, your website gets installed in the phone and added to the homescreen just like a native app.
Notification goodness: You can send push notifications, just like native apps can.
Offline: Using offline cache APIs your installed webapp can function offline as well.
Updates are a bliss: You just update the website on your server and the app cache will gracefully update itself without the user noticing. As many updates as you want without the user noticing it.
Progressive: Though the support for PWA is increasing rapidly, there may be some browser not supporting all the APIs. In such cases your PWA will function just like any other website. So, no more support issues. Support everything.

What the future holds:

It is clear that the next generation of webapps a.k.a Progressive Webapps are going to be an obvious standard in a few years. With growing browser support and user education users will expect websites to be PWAs. These are the exciting things coming up in PWAs :

Largest no. in Array using Recursion

Once suspended, bytegasm will not be able to comment or publish posts until their suspension is removed.

Once unsuspended, bytegasm will be able to comment and publish posts again.

Once unpublished, all posts by bytegasm will become hidden and only accessible to themselves.

If bytegasm is not suspended, they can still re-publish their posts from their dashboard.

Once unpublished, this post will become invisible to the public and only accessible to Bytegasm!.

Thanks for keeping DEV Community safe. Here is what you can do to flag bytegasm:

Unflagging bytegasm will restore default visibility to their posts.