React Router has given me some interesting glitches when using with with GH Pages. This will be a write up on my fails and the final way I got my homepage to render with React Router on GitHub Pages. Feel free to skip to the end to see what worked.

How to set up React Router Normally

Under a normal site you will set up the React Routes by install the npm for routes via npm install react-router-dom. This will give you the ability to import the proper tags by placing "import { BrowserRouter as Router, Route, NavLink} from "react-router-dom";". There are a few more tags that can be added such as Switch, Link, useRouteMatch, and useParams, but I used Route and NavLink. (I'm sure there are a few more but I am not aware of them.) (1)

Once you have the import statement with the tags you like you can implement the routes tags in your project. For my I placed them in my Header file that will be the navigation of my app like so. 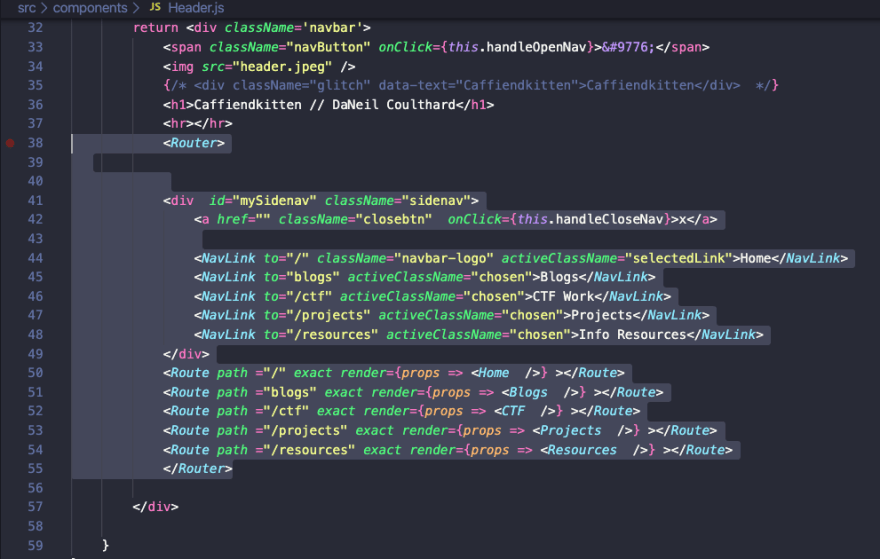 This time I focused on the home link itself instead of any other.
I did this by editing both the NavLink and the Route Path separately and added the "myportfolio" to the path so it would be "myportfolio/. This produced... nothing... OK, there was some stuff from the Header but not the home page content that is there when I am on my localhost...

The same thing happens if I have one or the other, NavLink or Route Path, with or without the "myportfolio/", Nothing shows up.

Now let's try something different as this obviously isn't getting anywhere.
Now I'm going to try the componentDidMount and see if adding the element to it will get it to render.

Which caused a LOT of errors.... and looks like this idea wont work.. 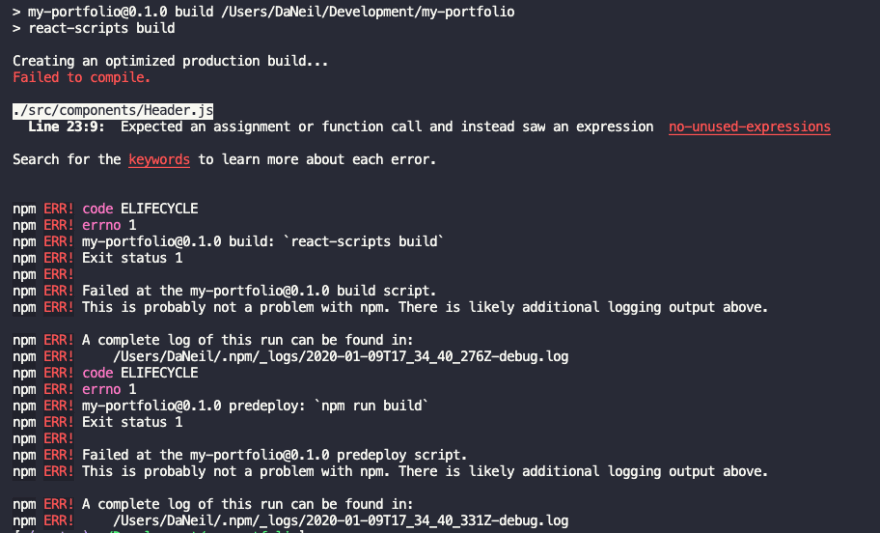 Another new thing to try is to create a const variable for the component and see if it will render it like this. 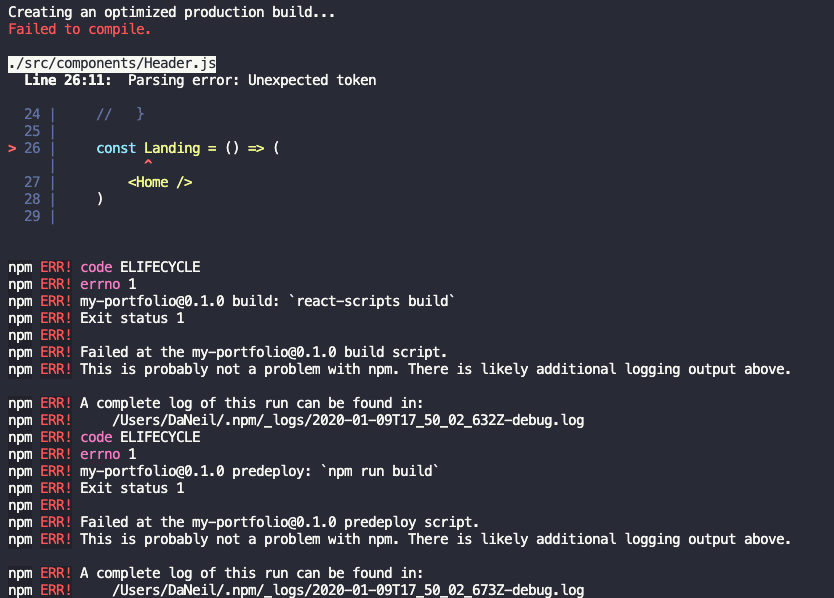 Hmm, I seem to have put it in the wrong location so I moved it up and out right below my imports which... did compile and looks like this. 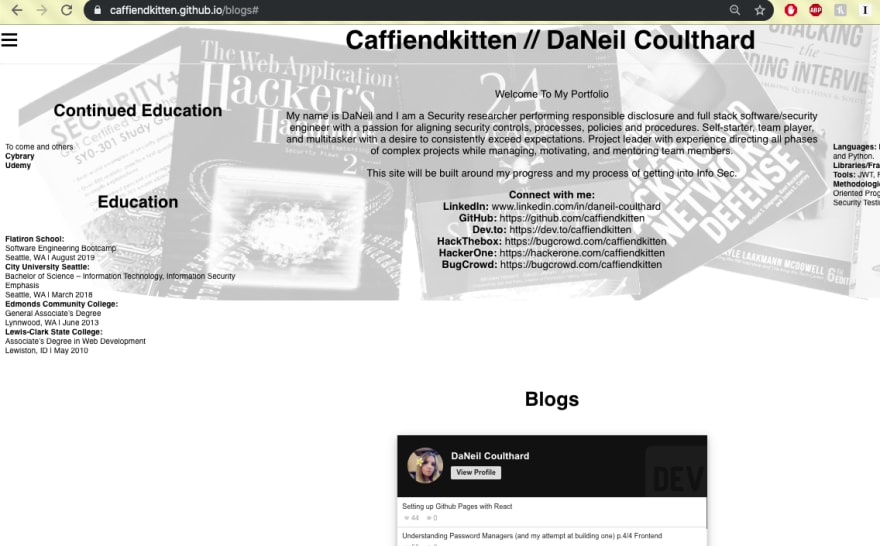 So, it DID work... sort of. As you can see, the content is stacking. It did render my landing page BUT it stacks any content below it, which is not what I want.
Is there a way to utilize this landing page variable to display the content on load?

Before I played with the variable I had an idea to try rendering the page without the "exact" tag. 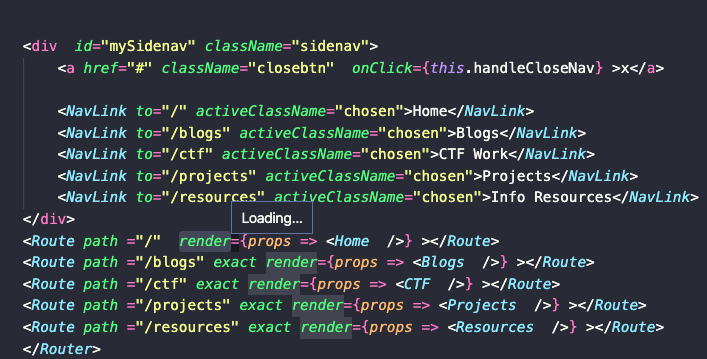 This again stacked the layout...

I changed my NavLink from "activeClassName="chosen"" to "exact".

This produced no change unfortunately... The site has no landing page but at least things are not stacking now.

I tried re-arranging the Route Paths and placed the home link at the bottom. I don't know but I figured it couldn't hurt to try as this is how my last project looks.

Ninth Attempt to Fix - Switch to the Rescue!

This is actually my like, 11th try but I decided I didn't want to bore people with all the attempts so here is where I tried a Switch and got it to work. Huzzah!
I added a Switch to my Router as well as a default component to get my home page to load. This method is supposed to be used as a case for if the components don't load properly but I found that I was able to use it for making my Home page show up like I wanted. (4)

As you can see I have a Component for "notfount" (cause my spelling is awesome) and I have a Switch case with a component={Home} as the last case in the Switch Tag. This allows for a default case as well as still having the allowance of the "/" to have a path for the Home button on my navigation. And Poof. My home page loads and other pages don't stack. Finally.

Now that I got my home page to load I need my path to display correctly so that if someone refreshes the page that they won't get a 404 page. Or maybe I need a "not found" page that will redirect people to the home page or something... ??? We shall see.

Please Note that I am still learning. If something that I have stated is incorrect please let me know. I would love to learn more about what I may not understand fully.

Learn How to use React Router v6