Someone confessed their dirtiest secret on this new website: https://confessions.flu.xxx
Can you find out what it is?

This challenge was quite fun and let me thinking for a while.

We are presented with a website that encode confessions. The title is in clear but the message is encoded with SHA256. 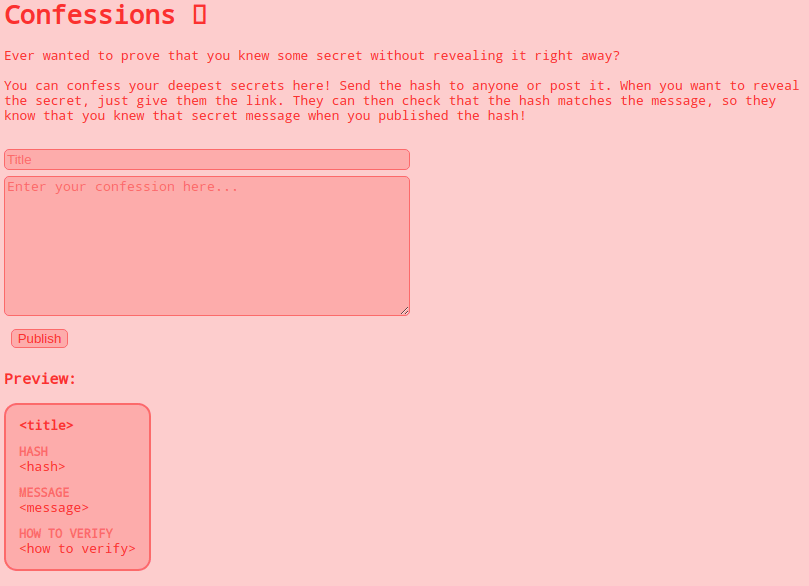 First thing first: we need to inspect the website. We have a confessions.js and it seems that the website works with a backend API in GraphQL which is great because we know a little of that! 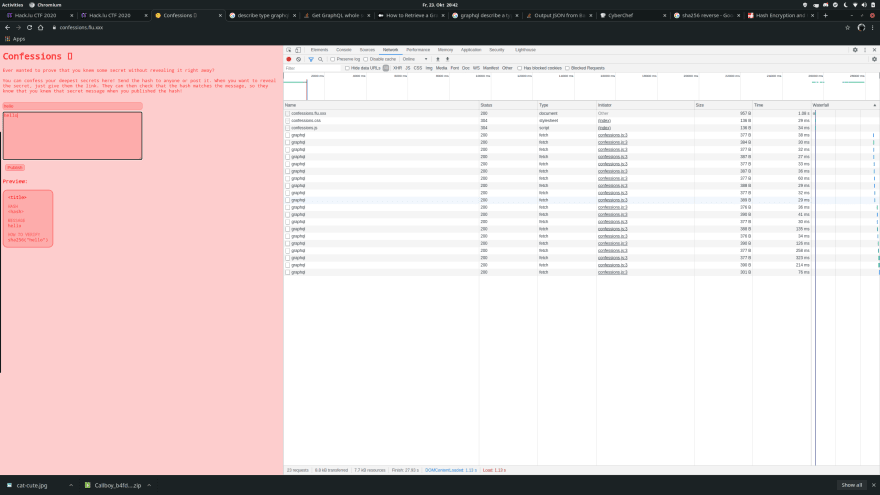 Then taking a look at the confessions.js file, we can get a glimpse of how the website works and what kind of queries and mutations can be ran:

Thanks to that, we are going to reverse step by step this API and see if the developers haven't forgotten some fields and resolvers there.

So let's boot up Burp and try to gather information for this API. Sometimes, if the API is meant to be used by client, the developers can allow a graphic interface: /graphiql. But this is not the case here.

When running a normal query we can compare what is shown on the website and through the API, it's the same:

So now, we need to know more about the API. Graphql APIs are defined by a schema that we can gather with this query:

This will enumerate all the fields, objects and queries of the API. Through that we will try to understand if we can get some more information than displayed on the website.

We can see a new object: Access that can I queried with the function accessLog. 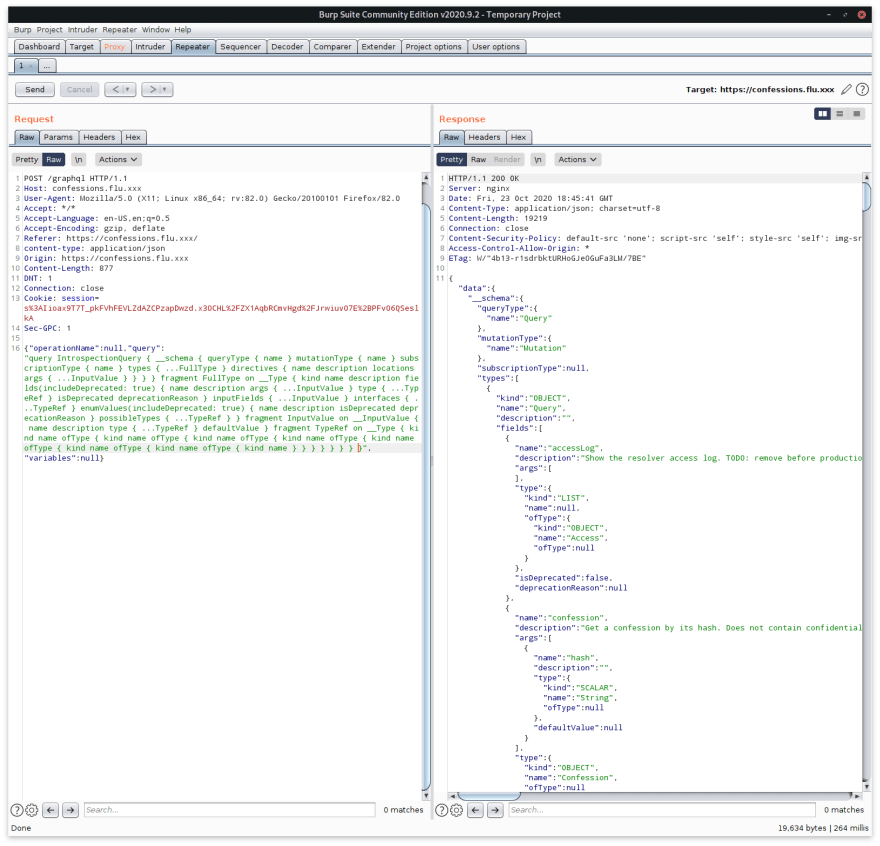 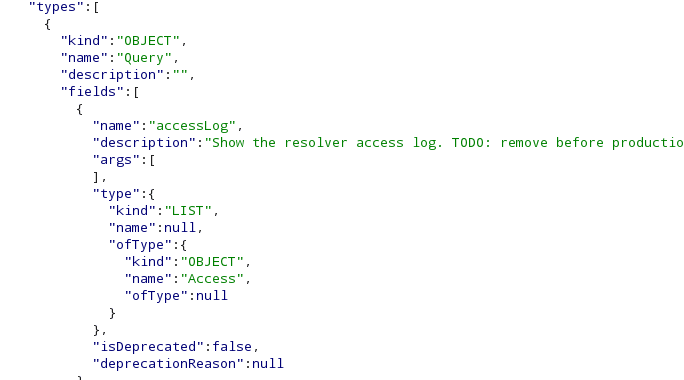 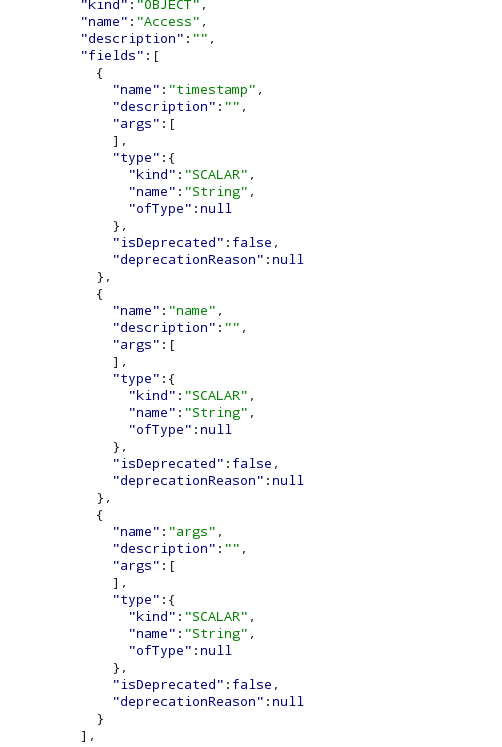 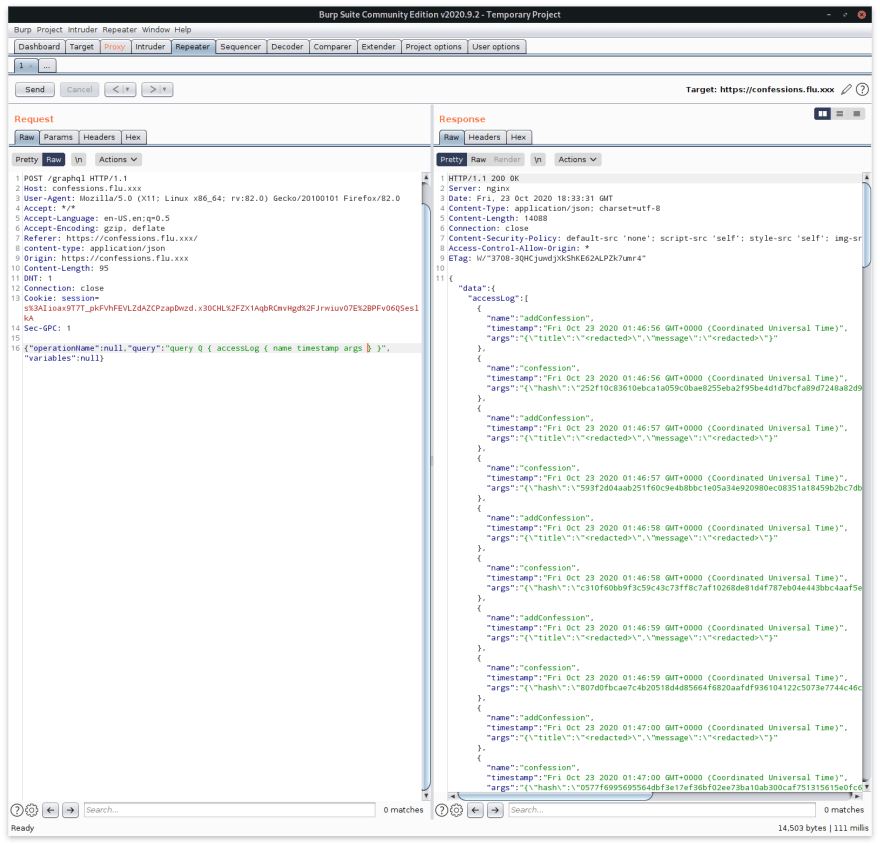 Those logs are interesting, it is possible that we have the flag right there. As the website shows you the hash of your "confession", maybe by querying the hash we can retrieve the confession. This didn't work from the website because the ID to query the "confession" was a UUID and not the hash itself. Nonetheless, a query through the API resulted with that: 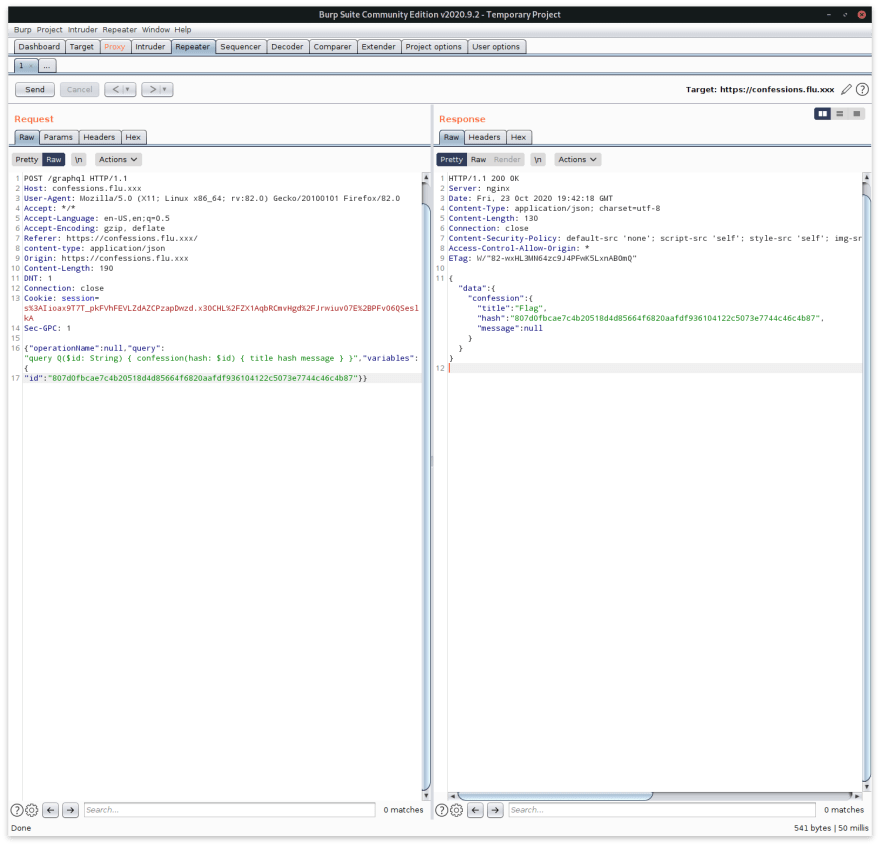 At this point it was already a couple hours in the challenge and we didn't realised that we were literally looking at the flag. We mistaken the title "Flag" with our own queries.

But not, it was the actual flag!

In fact, when using the website, the queries are launched at every key strokes, this mean that the accesslog is actually the flag being typed. So if we manage to reverse the hash or compare it somehow, we can retrieve the flag.

Getting the first letters online was quite simple, but we were stuck with: flag.

So knowing that the hashes are incremental, we can built up a mask attack on the supposed length of the flag as at the end we see 4 times empty SHA256 hashes from the log file and then queries that matched out timestamps of API use. Clearly a strong indicator of insecure data access.

We launched a massive mask attack and went to sleep but in the morning, we got nothing ; the computer was still running.

So we decided to try manually to gather the letters one by one as they are constructed. And tada, we finally got the flag!

Use GoAccess To Analyze HAProxy Logs

chris
writing things down before I forget them
The movie app that watches you watching
#security #android #malware
Investigations in Windows on TryHackMe (1)
#security
Pwnable.kr - Passcode: Write-up
#security #writeup #ctf