I recently saw this tweet by Jess Archer, which showed some Trait behavior that might not make sense at first glance. I thought it could be fun to explain why this happens. 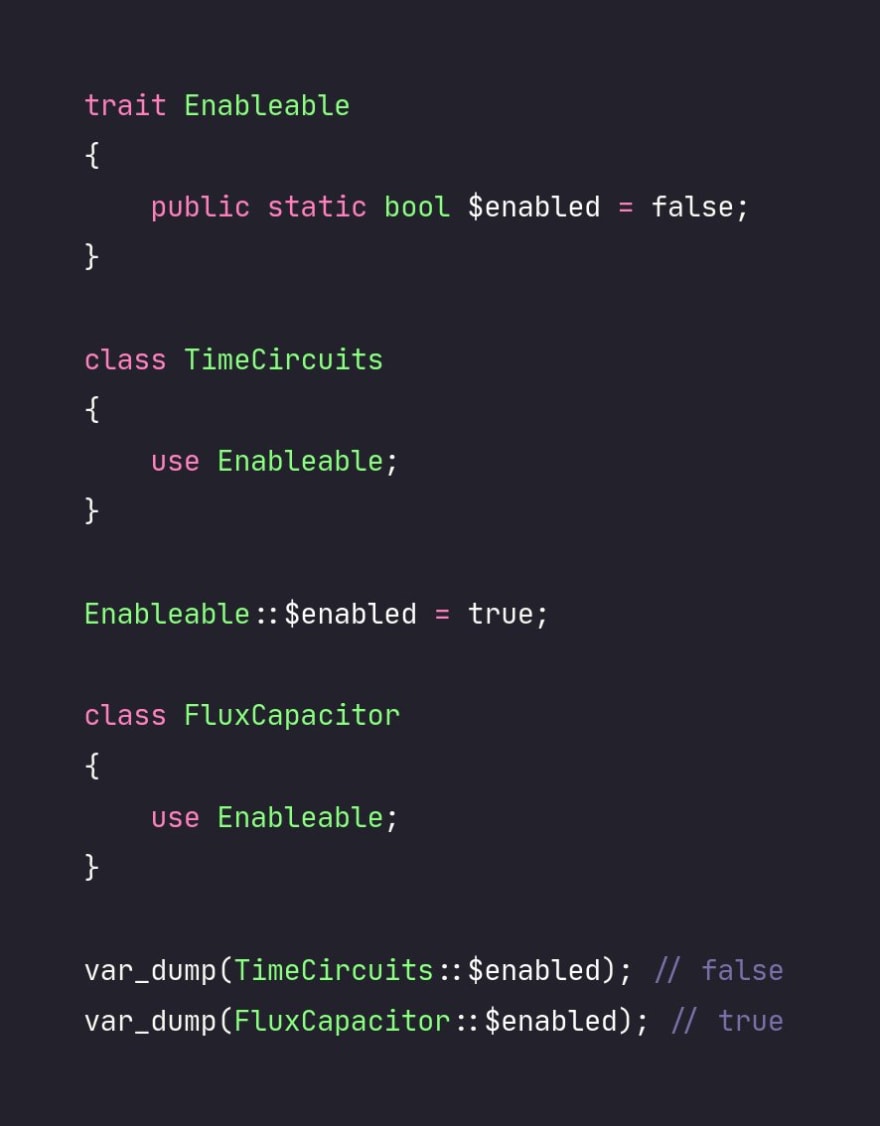 This behaviour surprised me!

While saying Enableable is cool and all; how in the world is it possible that the TimeCircuits::$enabled variable is still false, when it was clearly updated on the Enableable trait? The answer is: a trait is not inherited.

PHP is a so called Single Inheritance language meaning any class can inherit context from only one parent. In most cases this works out fine, but sometimes you have code in a class you want to re-use. This is impossible if the class you want to use this on already extends another class. This is why PHP introduced traits.

A trait is a kind of mini-class that can be used inside multiple classes. It can have methods, parameters, static methods and static variables, just like a class. Even the visibility like private, protected and public works the same. But instead inheriting from these traits by using extends, you have to use the trait inside a class. You actually have to use a trait inside a class, because you cannot instantiate it on its own. A class can also use multiple traits. This way you compose a new class made up of small re-usable pieces of code.

While a trait looks like any other class, this use-ing instead of extending makes a big difference. When you use a trait, the current state of the trait is copied to the class. And this copying is the reason why TimeCircuits is unaffected by the change on the Enableable trait. It is not inheriting this variable; it has it's own copy of it. And because the parameter was set to true before the FluxCapacitor class was created, this class has a copy of that state. Resetting Enableable::$enabled to false at the end will therefore still have no impact on either TimeCircuits or FluxCapacitor. They are completely separate parameters.

So let's see how a class would react to a similar situation. We'll create a Base class that has a static $enabled parameter, and an Extended class that extends (and therefore inherits from) Base. Then check out what happens when we change the value of this variable.

I'm not sure if Jess wanted a way to enable all classes that used this trait at the same time. If that is the case, I see 2 alternatives:

How To Install Sweetalert2 In Laravel 9

Once suspended, doekenorg will not be able to comment or publish posts until their suspension is removed.

Once unsuspended, doekenorg will be able to comment and publish posts again.

Once unpublished, all posts by doekenorg will become hidden and only accessible to themselves.

If doekenorg is not suspended, they can still re-publish their posts from their dashboard.

Once unpublished, this post will become invisible to the public and only accessible to Doeke Norg.

Thanks for keeping DEV Community 👩‍💻👨‍💻 safe. Here is what you can do to flag doekenorg:

Unflagging doekenorg will restore default visibility to their posts.