This article was written by Aaron Xie and was originally published at Educative, Inc.

Many shudder at the thought of a coding interview. It can be stressful, grueling, and challenging. Oftentimes, it can be a struggle simply to know what topics to prepare. However today, you will be introduced to the primary data structures and algorithms that are tested in a coding interview. After reading this article, you should have a good idea of what you need to prepare for to land your dream job.

Why should you learn data structures and algorithms?

The coding interview tests for your problem-solving abilities and understanding of computer science concepts. Usually, you are given about 30 - 45 minutes to solve one complex problem, but sometimes you will be given a few easier technical problems to solve.

This is where data structures and algorithms come in. These interviews will test you on topics such as linked lists, queues, sorting, searching, and much more, so it’s crucial to prepare. Not only do companies want to test your technical knowledge, but they also want to evaluate your problem-solving skills. If you get the job, you will often face bugs that you need to fix, and companies want to make sure that you can overcome these obstacles. Furthermore, you will often use specific data structures and algorithms to optimize your code so that it runs as efficiently as possible.

Big O notation is an asymptotic analysis that describes how long an algorithm takes to perform. In other words, it's used to talk about how efficient or complex an algorithm is.

Big O describes the execution time, or run time, of an algorithm relative to its input $N$ as the input increases. Though we can analyze an algorithm's efficiency using average-case and best-case, we typically use worst-case with Big O notation.

$O(1)$ describes an algorithm that always runs at a constant time no matter its input. The function will execute at the same time no matter if the array holds a thousand integers or one integer because it only takes one "step".

In the example provided, the array length is the input size, and the number of iterations is the runtime.

Some rules to remember

Want to read more about Big O notation? Check out our What is Big-O Notation article.

In simplest terms, data structures are ways to organize and store data in a computer so that it be accessed and modified. You will learn the basics of the important data structures that are tested in the coding interview.

An array is a collection of items of the same variable type that are stored sequentially in memory. It's one of the most popular and simple data structures and often used to implement other data structures.

Each item in an array is indexed starting with 0, and each item is known as an element. It's also important to note that in Java, you cannot change the size of an array. For dynamic sizes, it's recommended to use a List.

In the example above:

Initializing an array in Java:

A linked list is a linear sequence of nodes that are linked together. Each node contains a value and a pointer to the next node in the list. Unlike arrays, linked lists do not have indexes, so you must start at the first node and traverse through each node until you get to the $n$th node. At the end, the last node will point to a null value.

A linked list has a number of useful applications:

Stacks are linear data structures in a LIFO (last-in, first-out) order. Now, what does that mean? Imagine a stack of plates. The last plate that you put on top of the stack is the first one you take out. Stacks work that way: the last value you add is the first one you remove.

Think of a stack like a collection of items that we can add to and remove from. The most common functions in a stack are push, pop, isEmpty, and peek.

A stack has a number of useful applications:

Queues are very similar to stacks in that they both are linear data structures with dynamic size. However, queues are FIFO (first-in, first-out) data structures. To visualize this data structure, imagine you are lining up for a roller coaster. The first people that line up get to leave the line for the ride.

In this data structure, elements enter from the "back" and leave from the "front." The standard functions in a queue are enqueue, dequeue, rear, front, and isFull.

A queue has a number of useful applications:

A graph is a collection of vertices (nodes) that are connected by edges, creating a network.

Graphs are very versatile data structures that can solve a plethora of real-world problems. Graphs are often used in social networks like LinkedIn or Facebook. With GraphQL on the rise, data is being organized as graphs, or networks.

Basic implementation of a graph:

What's hashing?
Before we dive into hash tables, it's essential to understand what hashing is.

Hashing is the process of assigning an object into a unique index, known as a key. Each object is identified using a key-value pair, and the collection of objects is known as a dictionary.

A hash table is implemented by storing elements in an array and identifying them through a key. A hash function takes in a key and returns an index for which the value is stored.

So, whenever you input the key into the hash function, it will always return the same index, which will identify the associated element. Furthermore, if the hash function ever receives a unique key that returns an already used index, you can create a chain of elements with a linked list. 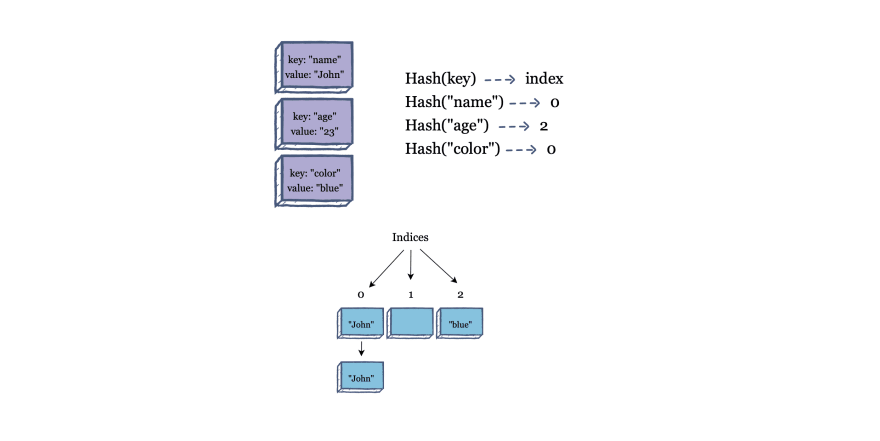 A hash table has a number of useful applications:

A binary search tree is a binary tree data structure made up of nodes. The nodes are arranged with the following properties:

Binary search trees are used in many search applications and also used to determine objects that need to be rendered in a 3D game. This data structure is widely used in engineer projects because hierarchical data is so common.

Learn the most asked interview questions without scrubbing through videos or grinding through hundreds of questions. Educative's text-based courses are easy to skim and feature live coding environments - making learning quick and efficient. 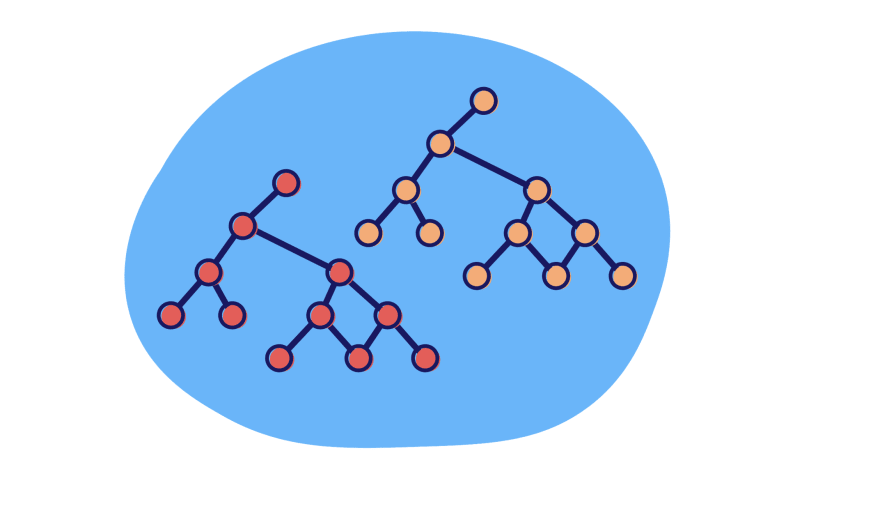 Recursion is the practice in which a function calls itself directly or indirectly. The corresponding function that is called is known as the recursive function. While recursion is often associated as an algorithm, it may help to understand it as a way or methodology to solve a problem.

So why is recursion useful? Or what even is it? Let's look at how we can use recursion to calculate factorials as an example.

In the example above, the function starts at a number $n$. When the function is called, it will call $factorial(n - 1)$. Say the $n$ value is 4; the function will return

Here, you can see the power of recursion. It’s a widely used practice of solving a complex problem by breaking it into smaller instances of the problem until we can solve it. Using recursion, you can simplify a lot of complex problems that would be difficult otherwise.

Bubble sort is a simple sorting algorithm that swaps adjacent elements if they are in an incorrect order. The algorithm will iterate through an array multiple times until the elements are in the correct order.

Say, we have an array as seen below.

As the algorithm scans the array from left to right for the first iteration, starting at index 0, it compares index $i$ with index $i + 1$. At index 1, it will see that 11 is greater than 6 and swap the two.

As the algorithm continues scanning for the first iteration, it will see that 13 is greater than 10 and swap the two.

Next, it will go through the array for its second iteration. It will swap the values in index 2 and 3 when it sees that 11 is greater than 10.

As you can see, bubble sort can perform poorly when working with a lot more elements, making it primarily used as simply an educational tool. It has a runtime complexity of O($n^2$).

Selection sort is an algorithm that splits a collection of elements into sorted and unsorted. During each iteration, the algorithm finds the smallest element in the unsorted group and moves it to the end of the sorted group.

Similar to bubble sort, selection sort is often a slow algorithm. It also has a runtime complexity of O($n^2$).

Insertion sort is a simple sorting algorithm that builds the final array by sorting an element one at a time. How does it work?

Let's look at an example.

Again, the algorithm looks to the left of 4. Because there is no element to the left of 4, it stays where it is. Next, onto index 2. The element with the value 6 looks to left. Because it's less than 11, the two switch.

Insertion sort is almost always more efficient than bubble sort and selection sort, so it's used more often when working with a small number of elements. Similar to the two other sorting algorithms, insertion sort also has a quadratic runtime of O($n^2$).

Binary search is the most efficient searching algorithm to find an element. The algorithm works by comparing the middle element of an array or list to the target element. If the values are the same, the index of the element will be returned. If not, the list will be cut in half.

This process continues where you keep splitting a list and searching one of the halves until the search algorithm finds the target value and returns the position. The runtime complexity of this algorithm is $O(log2n)$. It's important to note that binary search only works if the list is already sorted.

To visualize a binary search, let's say that you have a sorted array with ten elements, and you are looking for an index of 33.

The middle value of this array is 16, and the algorithm compares it to 33. 33 is greater than 16, so the algorithm splits the array and searches in the second half.

The new middle value is 28. Because 33 is greater than 28, the algorithm searches in the second half of the array.

After the array is split once again into the right half, the new middle value is 33. The algorithm sees that the middle value and the target value are the same and returns the position of the element.

Other topics to cover

Keep in mind that the concepts we have covered today are simply an introduction. It’s important that you take a deeper dive into the concepts and practice coding questions. Below are other topics we suggest you familiarize yourself with:

How to ace your next coding interview

Now, you should have a good idea of what you need to do before the day of the interview. You have a lot of learning to do, but no worries. If you want to continue the learning, check out the resources provided by Coding Interview or our Python, Java, or Javascript interview preparation courses under our Programming Language Interview series.

Here's a list of resources for you regarding the coding interview and general computer science topics.

How to Enable and Disable a Button in JavaScript 🔴🟢