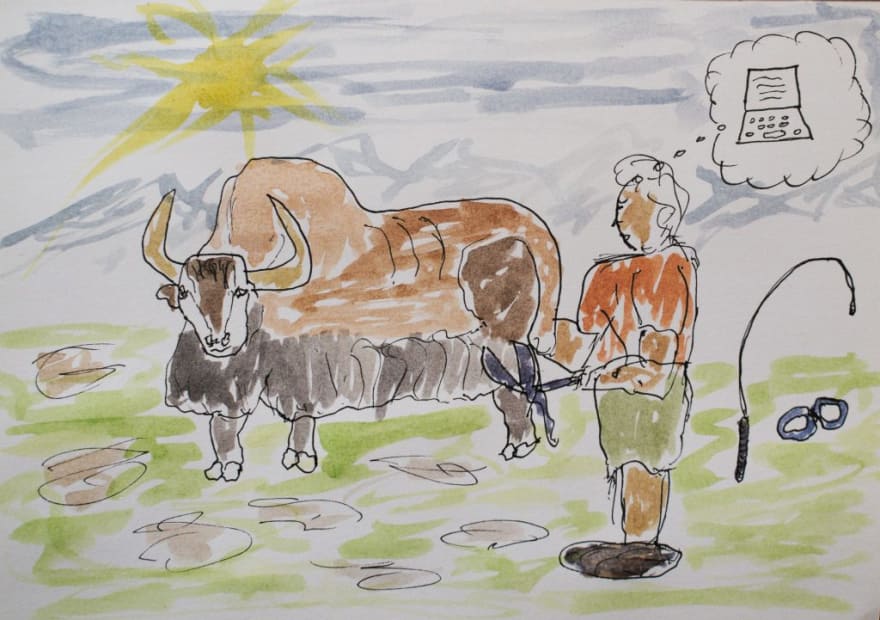 Recently I installed Ubuntu 18.04 to dual boot on a troublesome laptop alongside Windows 10. Everything went relatively fine eventually. That is after a rocky start trying to get my files on Windows backed up. I had to do so via a LiveCD before installing Ubuntu. That took quite some time. The hard disk is probably faulty, so it has to be replaced soon. Once it was up and running, it was time to install the various software applications I need.

I found that Cinelerra isn't natively supported by Ubuntu, so I need to figure out how to get that sorted. It is such a powerful tool from what I have read of it (and with such beautiful results as shown in the sample of user videos on its site) that I have to grok it.

I was surprised to see that Blender is supported. I really shouldn't have, seeing as it is open source, but I guess using it in Windows had made me forget its open source origins.

Handbrake is also supported! That, I don't think I'd have known. I got to know of it one time while looking for a proper way to convert video files in Windows.

I had forgotten that GIMP doesn't natively open raw files, so in reading around for a solution, I found RawTherapee. I haven't yet played with it though. Once I do, be sure I will write down my thoughts on it. I had known of Ufraw as a raw file editor, but on researching, what I found suggested RawTherapee was a much better option.

digiKam gets to replace Lightroom. From what little I've read about it, it is quite the powerful application. There's the digiKam Recipes Book that I am getting soon to help me learn the software. As its author Dmitri Popov points out, actually working on projects, albeit recipe format, is a much better and more effective way to learn software than to go through each menu option individually. And it is high time I got out of tutorial purgatory!**

Some other applications I installed are Chrome, Libre Writer/Calc, Filezilla, Git, Geany (after reading about it on Dev.to as a possible alternative to Windows' Notepad++) and Audacity.

There are other applications I had gotten used to in Windows that I need linux alternatives for. As and when the need to use them arises, I shall document the process of getting them. I do know that I need to set up wireless printing on the Canon PIXMA for both documents and discs. Initial research shows I can get that done. I just need to sit down and go into the details of it.

I want to do Whatsapp/Instagram/other apps sans mobile phone. It was an adventure trying to get that sorted. Prior to switching to Linux, I had come across a site that had an application called Franz which enables one to have several messaging apps under one roof. I thought I had struck gold until I downloaded and installed it. Instead of it being an emulator that allowed me to run the native Whatsapp app, it turns out it was just a wrapper that used web Whatsapp, which meant I needed an actual phone to scan the barcode to allow it to run my account. Clearly, that was not going to work for me.

On searching some more, I found a site called TechViola that listed seven applications that would allow me to run Whatsapp natively. Some of the applications are in alpha stage, some in beta, some paid, some free. I tried the easiest at first glance (Andy OS), only to realise it is a Windows only option. Next was via an extension on Chrome (ARC Welder), but that failed to launch the apps. Next, I tried Anbox and rain into issues installing it. They do say it is in alpha mode, so I shouldn't have been too surprised. Only thing is, getting it off was a problem. The installation hang, thus making it impossible to do anything else with apt. Each time I did, I was asked to run the command

to clean things up. Which then just hang again. Running

led nowhere either. In researching, I realised I needed to delete the two anbox modules in /usr/src, since each time I tried to update, apt would look there to see what sources lay therein to work on. I ended up deleting the two offending sources manually. Then ran

to clean up any pending config issues. I then ran

to clear up the configuration. Finally

executed smoothly without any errors.

In the process, I got reacquanted with a lock file and the commands ps, grep and kill. Each time I tried working on apt after the hang, I would get a message that the /var/lib/dpkg/lock file was being held by a process. How was I to find that process? Well, run the command

This listed the offending process. Then just run the command

Back to that emulator...

I then decided to just go ahead and try out Genymotion. I followed the install instructions given on the documentation site. I ran into issues where the needed Virtual Box stated that the kernel drivers were not installed. However, on checking and seeing that it appeared in the applications menu, I thought that that was enough for Genymotion. So I tried launching the application and ran into an error stating it needed the vboxdrv module. So I still neded to figure out how to get that module installed.

After searching around, I came across a forum post that recommended removing virtualbox

then downloading the package from VirtualBox.org and installing it manually.

I did that then ran into dependency issues. The installation process stated it needed libcurl4. I ran the command

Then repeated the virtualbox installation command. It installed just fine after that.

I then went back to Genymotion, executed it, and it started up without a problem.

The next stage was setting up a virtual device. The one I chose was a custom tablet running Android 8.0. Unfortunately, Whatsapp was not compatible with that device, so I had to select a different one. I chose the Samsung Galaxy 8. Same problem! What was going on? Back to searching for a solution. At some point, I decided to put back the custom tablet and tried installing Instagram. It installed without any fuss whatsoever! Just for giggles I tried installing Whatsapp again. Aye, it showed it was compatible and installed without any issue too! This I don't understand. The next time I have nothing to do I'll do a little digging to find out what the issue was. But for now, the apps are up and running. And I am a happy camper!

Not so fast! The following day when I tried to start Genymotion it failed! Reason? The needed Virtualbox modules did not get loaded! On looking at the /dev folder, those modules had gone missing! Back to troubleshooting mode...

In the applications tab, Virtualbox was shown as having been installed. And I could actually run it. However, it did issue a warning that the character device /dev/vboxdrv did not exist, stating that virtual machines would not get started without it.

I went back to the instructions from the Virtualbox forum and tried them again. In the process, I came across an error that stated insertion of the vboxdrv failed. Time to use another almost forgotten instruction to figure things out: dmesg. Running it, however, yielded no clues. On re-reading the error message from the build process, it showed that there was an error executing the vboxdrv.sh script. Looking through the script file, I couldn't pick out anything. And then, while thinking about it, I remembered reading in one of the numerous sites I found researching this issue yesterday that secure boot needed to be disabled for successful installation of Virtualbox. I thought that once installed, then I could re-enable it. Sure enough, after I disabled it again, everything worked just fine. But, I can't leave it unsecure, so I went looking to see if I could operate Virtualbox while still enabling secure boot.

The resource I found by Øyvind Stegard was super clear on resolving this issue. He explains in his blog that the vbox modules are not loaded since they are usigned. Ubuntu does not sign third party modules, suggesting that secure boot should be turned off to allow them. However, since that is not an option, he provides a way to sign them so that they are loaded just like any other modules with secure boot turned on. His instructions were very clear, and on testing after implementing them, I found (using lsmod | grep vbox) that the modules were indeed loaded. Genymotion, of course, started without any problems. I just need to remember to sign the modules each time the kernel is updated. Maybe I can find a way to automate this process, so that once an update is detected, the signing is activated. Hmm...

I know I had vented how yak shaving chased me from Windows. Yet, here I am, doing the same exact thing in Linux. That said, I think shaving yaks in Linux land is a much better and more exciting proposition than the same in Windows land. And I learn so much more in the process!

Two takeaways from all this...

These chronicles are a way to record the steps I take in doing various things in the entire Linux ecosystem as a reminder to my future self on how to deal with problems I may have encountered in the past. Frequency of posts may be as many as several a day, or as few as some every few months.

Ask Ubuntu forum that explained how to get rid of the lock file in use problem: https://askubuntu.com/questions/15433/unable-to-lock-the-administration-directory-var-lib-dpkg-is-another-process

Yak shaving: [MIT AI Lab, after 2000: orig. probably from a Ren & Stimpy episode.] Any seemingly pointless activity which is actually necessary to solve a problem which solves a problem which, several levels of recursion later, solves the real problem you're working on. http://www.catb.org/~esr/jargon/html/Y/yak-shaving.html

Studied EE, designed hardware 5 years, then switched to photography for past 10 years. Getting itch to get back into the tech game, but this time software. Learning, looking for opps to grow skills.

Celebrating 10K+ Followers 🎉🙌 Thank you DEV and everyone! 👋

Auto-magically log all output of your script to syslog