While reading the section on data frames in The Book of R, I got a result that was wrong from that in the exercise. Wrong because I had left out a comma in the code. Before I would just have corrected it and moved on, but this time around I wanted to know why it is I got that wrong result.

The data frame I was working with is 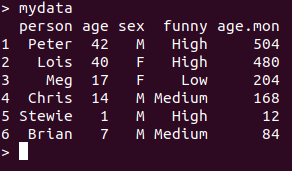 The code I typed was mydata[mydata$sex=="F"] This resulted in the following output: 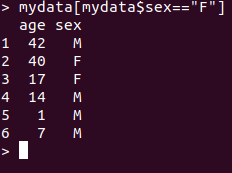 Not quite what I expected. I then typed out just the test itself mydata$sex=="F" and got the following vector of logicals.

Looking at it, and comparing it to the output I got, things started making sense. The two columns I got back from my original code coincided with the logical TRUE values in the vector from the second code. What I had done by leaving out the comma was make a selection of columns instead of a selection of rows meeting the test criteria.

With this knowledge, I typed out the proper code mydata[mydata$sex=="F",] to get

The result I expected. Forcing myself to slow down and actually understand why code gives the output it does is doing wonders for my learning progress. Had I not understood from earlier reading and exercises how row and column selection coupled with logical values actually works, this would have been a much more difficult issue to figure out. Onwards with learning R!

The Book of R: https://nostarch.com/bookofr

Getting started with Bootstrap 5

Once suspended, egimba will not be able to comment or publish posts until their suspension is removed.

Once unsuspended, egimba will be able to comment and publish posts again.

Once unpublished, all posts by egimba will become hidden and only accessible to themselves.

If egimba is not suspended, they can still re-publish their posts from their dashboard.

Once unpublished, this post will become invisible to the public and only accessible to Eric Gitonga.

Thanks for keeping DEV Community safe. Here is what you can do to flag egimba:

Unflagging egimba will restore default visibility to their posts.