This React website was created as part of the application process for the Shopify Front-End Developer Internship.

I figured it might be helpful for other recent graduates or junior developers to share my process. It is of course not the only way to tackle such a project, but one that I found worked well for me. Hopefully, the folks at Shopify agree. :)

Create a webpage that can search OMDB for movies, and allow the user to save their favorite films they feel should be up for nomination. When they've selected 5 nominees they should be notified they're finished.

Improvements to the design and functionality are allowed, in order to highlight passion and skills. 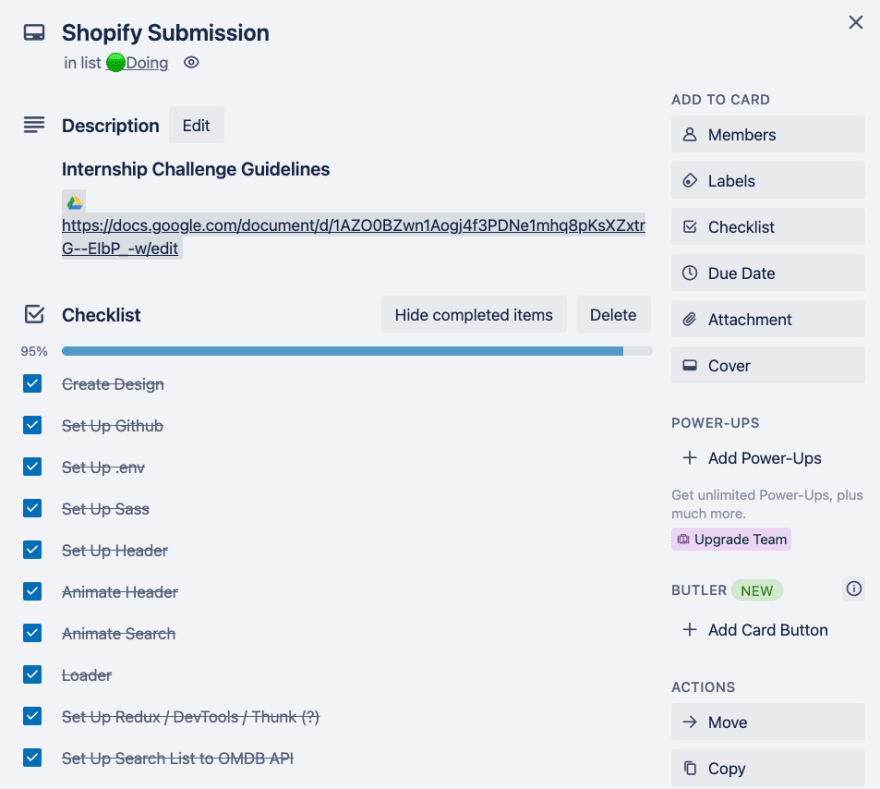 Using Trello I created a checklist of the requirements and the my additional ideas. This let me keep on top of production against the deadline and quickly capture/prioritize new ideas while I was working.

For this site, I just used a single card, but for larger projects, I would’ve broken up tasks into separate cards on a larger kanban board.

One of the key areas I wanted to play with was the design and keep it within the existing brand family. This way the nomination site would have the trust of the Shopify brand and the winner would carry more impact. (Plus I really love the branding and wanted an opportunity to apply it in a project.)

The first places I checked were the Shopify marketing site and the Polaris design system site. These were valuable to see what sort of layouts, color, and typography were used.

I also took note of the copywriting style for the main service pages and how there was an engaging theme of elements overlaying into other sections, breaking the grid.

Lastly, I attended a webinar hosted by Shopify that had 5 panelists talk about the application process, but more importantly how they approach design and development at Shopify.

Being able to learn the context of projects was really important to them and having a growth mindset. 4 months as an intern goes by fast and they mentioned how important it was to take in as much as possible.

This webinar helped validate for me that applying the context of the exiting brand would be a good direction and that showcasing an ability to adapt to new tech would also work in my favor. (Such as using Redux, which was listed in the job description.)

Now that I had a feature list and design direction I leveraged Figma for the next stage of planning.

Since I was going to build this application with React, I created a "React Component Flow" that showed what components would be needed and how they would be structured. This also made it easier later on the create the folder structure and quickly brainstorm when a new component was needed.

Next, I created the user interface that was tied to a design system. The design system held styles for typography and colors. It also housed Figma components that were built with Auto Layout and Variants.

Creating these design assets upfront made the coding a lot easier, as many problems could be identified and solved in this initial stage.

By this point, I had everything I needed to start coding and the above resources proved helpful throughout development. I decided on building the site in React and use Redux, SASS, and CSS Animations to support it. These 3 technologies are all areas I can improve in and I wanted this project to be a catalyst for growth, whether it helped to earn the internship or not.

Layouts are achieved with CSS Grids, Flexbox, Transform and Relative/Absolute positioning. I used SCSS mixins and variables to standardize the media queries across the site and ensure an optimized layout for all screens.

There are many CSS animations used across the site to introduce and send off different elements.

I created some manually and generated others with animista.net. To help streamline the SCSS files I placed the actual keyframes into an "_animations.scss" partial file.

This allowed animations to be re-used without repeating code and reduced the overall size of the main SCSS files.

To ensure that multiple API calls are not made with each letter inputted, I used a debounce custom hook to delay the API call until the user finished typing.

A Spinner/Loader Is Shown During API Calls

This helps the user know something is happening if the API doesn't respond right away.

Since some people prefer The Office over Star Wars, I felt it was important to also allow people to search series. However, this is separated from the movie search, to follow the project requirements.

First, the Search Action Creator (using redux-thunk) checks to see if the user searching for movies or a series.

It then makes the API call. The response is run through several checks, which are described in the below comments.

Helper functions are used within the Reducer stores, to make the switch cases more streamlined.

The OMDB API was queried again using Redux Thunk in an action creator so that nominations can have complete movie details. (This is needed because when querying for a list of results only a few points of movie-specific data are returned.)

Nominated films allow you to open their page in IMDB. This is achieved by taking the imdbId and dynamically inserting it into the <a href=""> with it's "" removed.

To help control the layout for nominated movies, their genres have been restricted to the first 3.

For a better user experience, nominated movies and the winner preserve their data in local storage. That way nothing goes away when the user refreshes the screen.

The nomination container component looks out newly nominated movies and then stores.

When the user is ready to view the winners, the movies are shuffled and this new list is stored in local storage.

Lastly, both lists are removed from local storage, when the user clicks the reset button.