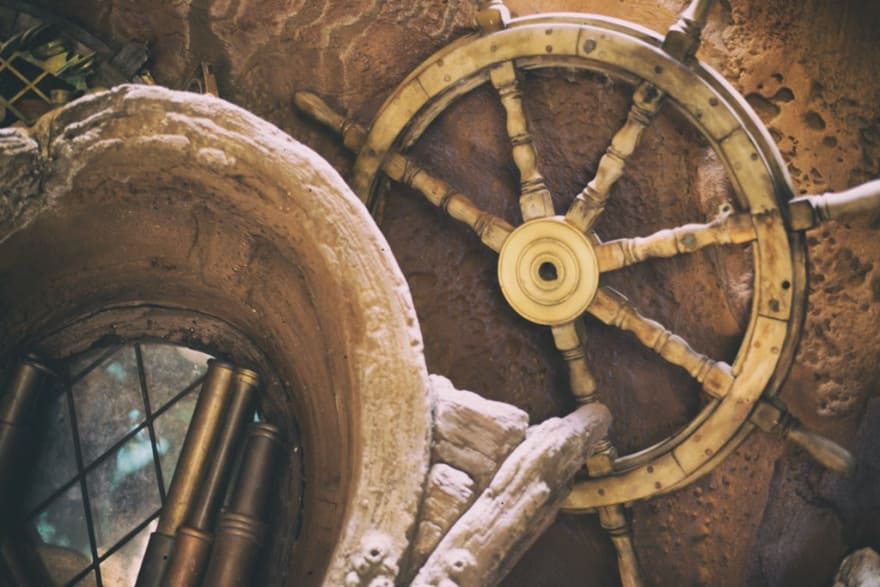 Have you ever been in a situation that started with …

Someone at work: “Look, it’s super simple, let me explain …”

Same enthusiastic colleague: “See, did you get it?”

… but that ended up with you sneaking into the bathroom to babble chunks of keywords you barely remember.

“Ok Google, what is a cluster of Ingress in a cube of nodes? … Please please please help me.”

Nope. Hasn’t happened to me. Not even once. No Sir!

But let’s pretend that it did happen (hypothetically) several years ago, and that all the articles I stumbled upon during my research were made of such cryptic symbols that tears started to come out of my eyes (and they weren’t tears of joy).

So based on this fictional situation, let’s try to write the easiest tutorial that involves setting up Traefik as an Ingress Controller for Kubernetes. (And I promise: I will explain everything that is not obvious.)

You can skip this part if you’re familiar with Kubernetes.

What You Need to Know about Kubernetes

Kubernetes, as in Cluster

Kubernetes is a cluster technology. It means that you will see a cluster of computers as one entity. You will not deploy an application on a specific computer, but somewhere in the cluster, and it’s Kubernetes’s job to determine the computer that best matches the requirements of your application.

Each computer in the cluster is called a node. Eventually, the nodes will host your applications. The nodes can be spread throughout the world in different data centers, and it’s Kubernetes’s job to make them communicate as if they were neighbors.

Containers technically don’t belong to Kubernetes; they’re just one of the tools of the trade.

Basically, Kubernetes sees containers like in the following diagram:

Because Kubernetes loves layers, Kubernetes adds the notion of Pods around your containers. Pods are the smallest unit you will eventually deploy to the cluster. A single Pod can hold multiple containers, but for the sake of simplicity let’s say for now that a single Pod will host a single container.

Here comes the fun part! Deployments are requirements you give to Kubernetes regarding your applications (your Pods). Basically, with deployments you tell Kubernetes:

It’s Kubernetes’s job to ensure that your cluster will host 5 replicas of your Pods at any given time.

Oh, yet another fun concept …

Pods’ lifecycle are erratic; they come and go by Kubernetes’ will.

Not in the right place? Cloned, and killed.

(No, you definitely don’t want to be ruled by Kube!)

So how can you send a request to your application if you can’t know for sure where it lives? The answer lies in services.

Services define sets of your deployed Pods, so you can send a request to “whichever available Pod of your application type.”

So we have Pods in our cluster.

We have Services so we can talk to them from within our cluster. (Technically, there are ways to make services available from the outside, but we’ll purposefully skip that part for now.)

Ingress objects are the rules that define the routes that should exist.

Now that you have defined the rules to access your services from the outside, all you need is a component that routes the incoming requests according to the rules … and these components are called Ingress Controllers!

And since this is the topic of this article — Traefik is a great Ingress Controller for Kubernetes. 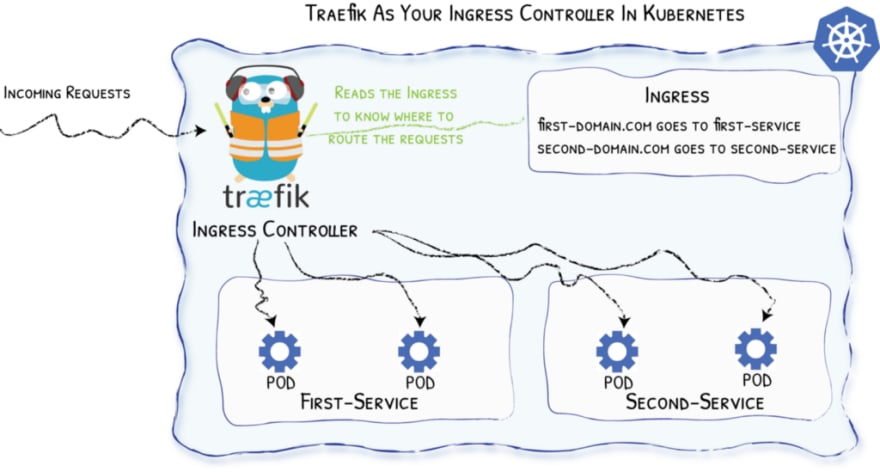 What You Need to Know about Traefik

… oh? Is my opinion biased? Well, maybe … but all of the above is true!

Let’s Start Putting Everything Together!

This is the part where we actually start to deploy services into a Kube cluster and configure Traefik as an Ingress Controller.

You have access to a Kubernetes cluster, and you have kubectl that points to that cluster.

Just so you know, here I’m using Kubernetes embedded in Docker for Mac.

And because we love diagrams, here is the picture: 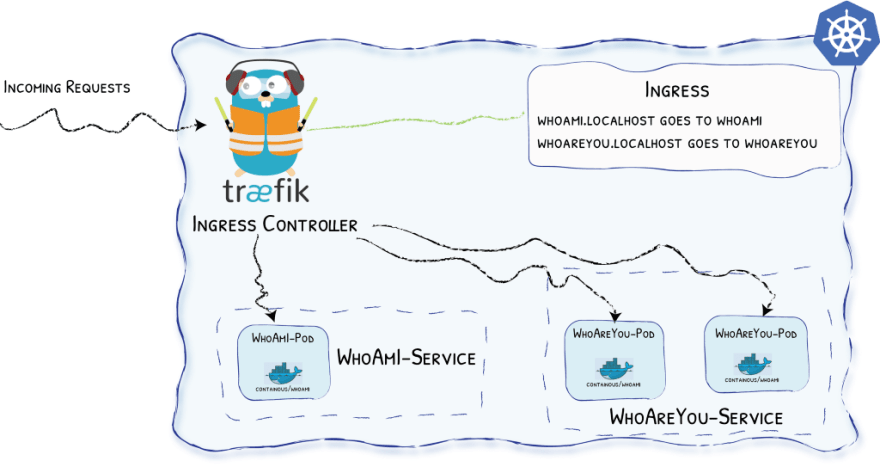 Helm is a package manager for Kube and, for me, the most convenient way to configure Traefik without messing it up. (If you haven’t installed Helm yet, doing so is quite easy and fits in two command lines, e.g. brew install kubernetes-helm, and helm init.) 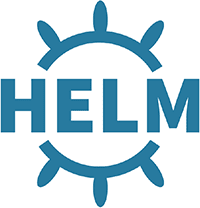 To set up Traefik, copy / paste the following command line:

In the above command line, we enabled the dashboard (dashboard.enabled=true) and made it available on http://dashboard.localhost (dashboard.domain=localhost.domain).

The output of the helm install command line will look like: 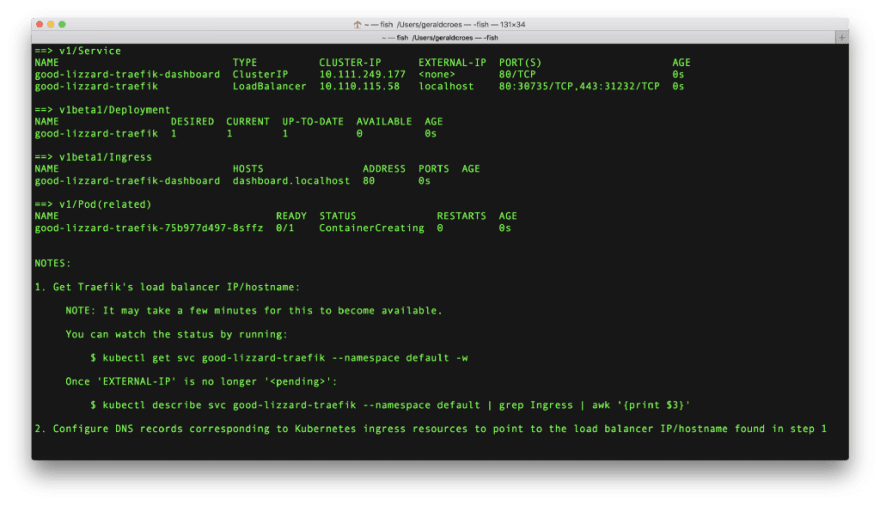 In my case, EXTERNAL-IP is already available and is localhost.

And as we said before, we should be able to access the dashboard right away!

As a reminder, we want one Pod with one container (containous/whoami).

Kubernetes uses yaml files to describe its objects, so we will describe our deployment using one.

📗 Note: You can read more about deployments in the Kubernetes documentation.

Now that we have described our deployment, we ask Kubernetes to take the file into account with the following command:

And let’s check what happened with:

If you remember correctly, we need services so we can talk to “any available Pod” of a given kind.

Once again, we need to define the object:

📗 Note: You can read more about services in the Kubernetes documentation.

Now that we have described our service, we ask Kubernetes to take the file into account with the following command:

And let’s check what happened with:

At last, we’re about to define the rules so that the world can benefit from our (kick-ass) service.

You know the drill, let’s write the YML file to describe the new object:

📗 Note: You can read more about Ingress in the Kubernetes documentation.

Now that we have described our Ingress, we ask Kubernetes to take the file into account with the following (same old) command:

And now, since Traefik is our Ingress Controller, let’s see if something has changed in the dashboard …

That’s it, no reload, no additional configuration file (there were enough). Traefik has updated its configuration and is now able to handle the route whoami.localhost!

Yes, our service is useful, but its UI could use a bit of love ❤️

Here, we confirm that Traefik is our Ingress Controller and that it is ready to bring its features to your services!

May I Ask For Load Balancing in Action?

Earlier, we talked about a WhoAreYou deployment with 2 replicas.

There is not much to say here, except that this time we have 2 replicas … (replicas: 2)

So let’s ask Kubernetes to apply our new configuration file.

And let’s go right away to Traefik’s dashboard.

If I had wanted to write an article that dealt with “just” configuring Traefik as an Ingress Controller for Kubernetes, well, it would have fit in one line:

Because it’s actually the only configuration operation that we’ve needed in the article. The rest is just explanations and demos.

Yes, this step was indeed as simple as that!

Now that you know how to configure Traefik, it might be a good time to delve into its documentation and learn about its other features (auto HTTPS, Let’s Encrypt automatic support, circuit breaker, load balancing, retry, websocket, HTTP2, GRPC, metrics, etc.)

Containous is the company that helps Træfik be the successful open-source project it is (and that provides commercial support for Traefik).

Your comments & questions are welcome!

You can clone the files from my github repository geraldcroes/kubernetes-traefik-article.